Gold prices touched a one-month higher this morning, posting an early session high of $1258.18 an ounce. The U.S. dollar was seen trading weaker across the board earlier today with much of the gains coming from gold and the Japanese yen.

The U.S. dollar index was seen trading weaker at the open today continuing from Friday's modest declines, which came after President Trump's healthcare bill was withdrawn from Congress due to lack of support from the Republicans. The reaction was, however, muted although many are starting to wonder if the President will be able to push through with his proposed tax reforms and infrastructure overhaul ideas.

The economic calendar is relatively quiet today with only the German Ifo business climate data scheduled for release. Later in the afternoon, FOMC members, Evans and Kaplan will be speaking. 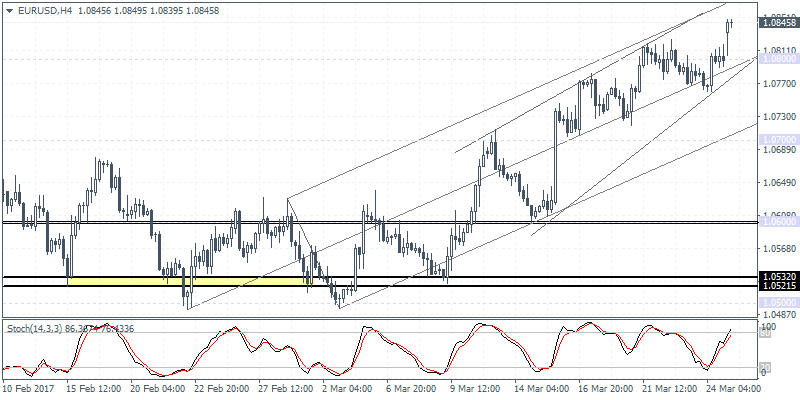 EURUSD (1.0845): EURUSD gapped higher on the open today above the resistance level of 1.0800. On the daily chart, the Stochastics oscillator remains in thestrongly overbought area above 80. On the 4-hour chart, the EURUSD is continuing to push higher within the rising median line while moving within the rising wedge pattern. This increases the risks of a downside correction in the common currency.

The 4-hour Stochastics is currently printing a lower high in prices and also signals a correction based on the bearish divergence being formed. Watch for a potential EURUSD decline towards 1.0700 in the near term. 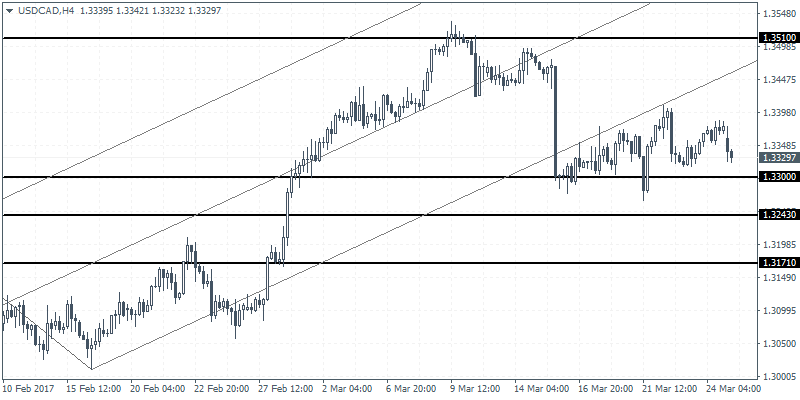 USDCAD (1.3329): USDCAD has formed a bearish flag pattern on the daily chart with the support level seen at 1.3300. A breakdown below this support could signal further downside as USDCAD will target 1.3243 and 1.3171 price targets. For the moment, the bearish bias remains intact as price briefly posted a bounce off 1.3300 support forming a lower high in the process. However, in the event that price fails to break past the 1.3300 support level, we can expect to see USDCAD consolidate above this support level in the near term. 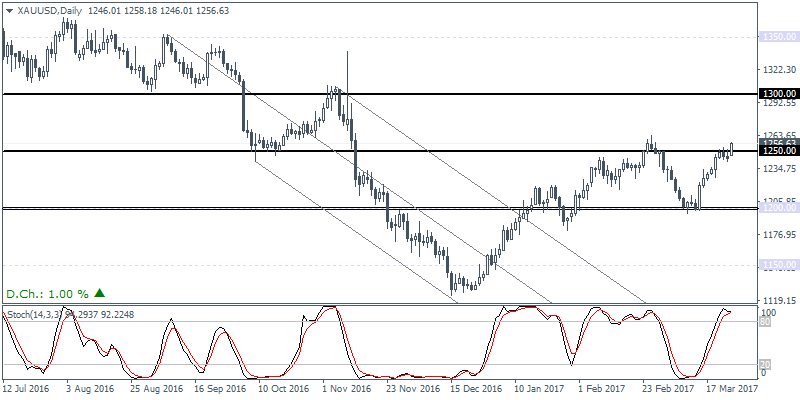 XAUUSD (1256.63): Gold prices are seen hovering near a one-month high earlier today above the support level at 1250.00. A continued move to the upside could signal further gains towards 1300.00 where resistance can be formed. However, the daily Stochastics shows gold prices to be very overbought and could signal a near term correction to the downside. With support at 1200.00 gold prices could remain range bound in the near term but the bias remains to the upside. Only a break down below 1200.00 will trigger further declines in which case 1150.00 remains the next support level to the downside.