Gold price benefited from the broad-based US Dollar weakness and ended up gaining nearly 2% this week despite having failed to close above $1,800. In the absence of high-impact data releases from the US, investors will keep a close eye on coronavirus-related headlines from China and assess XAU/USD’s technical developments for fresh directional clues.

The negative shift witnessed in risk sentiment helped the US Dollar gather strength on Monday and caused XAU/USD to edge lower toward $1,740. China continued to report record daily-high coronavirus cases over the weekend and the PMI data showed that the business activity in the manufacturing and service sectors contracted in November, reviving concerns about a global economic downturn.

Renewed optimism about China continuing to move away from its zero-Covid policy allowed investors to remain hopeful about an improvement in gold demand. China's National Health Commission announced early Tuesday that they will strengthen vaccinations for the elderly and officials said that Guangdong province will allow close contacts of Covid cases to quarantine at home. Additionally, “China may walk out of the shadow of COVID-19 sooner than expected,” Global Times commentator Hu Xijin tweeted. Gold price snapped a two-day losing streak and closed modestly higher at around $1,750.

On Wednesday, the US Dollar came under heavy selling pressure and XAU/USD gained more than 1% on a daily basis. In his last public appearance before the Federal Reserve’s blackout period starts on December 3, FOMC Chairman Jerome Powell acknowledged that it will make sense to moderate the pace of rate increases. “We have made substantial progress toward sufficiently restrictive policy,” Powell added and noted it was likely for the terminal rate to be revised ‘somewhat higher’ in December’s dot plot. Following Powell’s dovish remarks, the CME Group FedWatch Tool’s probability of a 50 basis points (bps) rate hike in December climbed to 80% from 66% ahead of the event. As a result, the 10-year US Treasury bond yield lost nearly 4%, providing an extra boost to the negatively-correlated XAU/USD.

The USD sell-off picked up steam on Thursday and Gold price climbed above $1,800 for the first time in nearly five months. The US Bureau of Economic Analysis reported that the Personal Consumption Expenditures (PCE) Price Index declined to 6% on a yearly basis in October from 6.3% in September. This reading came in lower than the market expectation of 6.2% and allowed investors to continue to price in a Fed policy pivot. Other data from the US revealed that the ISM Manufacturing PMI fell to 49 in November from 50.2 in October. More importantly, the Prices Paid Index declined to 43 from 46.6, revealing a deceleration in the sector’s input price inflation.

Ahead of the weekend, the US Dollar managed to stage a rebound and forced XAU/USD to erase some of its weekly gains. The US Bureau of Labor Statistics reported that Nonfarm Payrolls rose by 263,000 in November, compared to the market expectation of 200,000. Additionally, annual wage inflation climbed to 5.1% from 4.9%. The 10-year US T-bond yield rose sharply on the upbeat jobs report, causing Gold price to retreat below $1,790 in the second half of the day on Friday.

The ISM Services PMI report will be featured in the US economic docket on Monday. The Prices Paid Index is forecast to rise to 73.6 in November from 70.7 in October. The market reaction to the ISM Manufacturing PMI suggests that the US Dollar is likely to weaken against its rivals in case the inflation component falls in November. On the other hand, An increase in the Prices Paid Index combined with a headline PMI print at around 55, as expected, should help the USD find demand and weigh on XAU/USD.

On Friday, the University of Michigan will publish the Consumer Sentiment Survey for December. Consumer confidence in the US is forecast to continue to weaken but investors are likely to react to the long-run inflation expectation print, which stood at 3% in November. An increase in this component is likely to hurt Gold price by supporting the US Dollar and vice versa.

In the absence of any other noteworthy macroeconomic data releases, market participants will pay close attention to developments surrounding China’s zero-Covid policy.

Bloomberg reported on Friday that China’s politburo, the Communist Party’s decision-making body, was likely to signal a shift in policy to focus on re-opening and promoting economic growth when they meet in December. There is no set date for the meeting but it’s expected to happen in early December. If Chinese leaders decide to continue to ease coronavirus restrictions and introduce measures to boost economic activity, Gold price is likely to rise sharply on heightened prospects for a strong demand recovery in 2023. 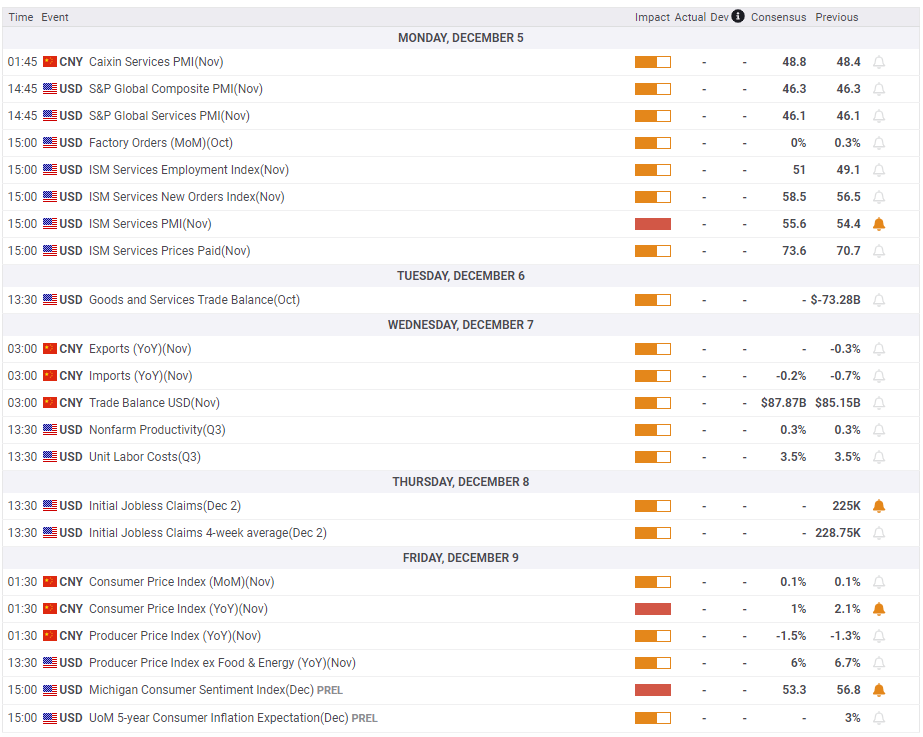 Despite Friday's decline, Gold price preserves its bullish bias with the Relative Strength ındex (RSI) indicator on the daily chart holding comfortably above 50.

On the upside, $1,800 (psychological level, 200-day Simple Moving Average (SMA)) aligns as a key pivot level. Once XAU/USD stabilizes above that level by using it as support, it could target $1,830 (Fibonacci 50% retracement of the long-term downtrend) and $1,860 (static level) next.

Experts polled by FXStreet expect Gold price to remain bullish in the short term with the average one-week target sitting at $1,805. There is a slightly bullish bias in the one-month outlook but the average target is located at $1,784. 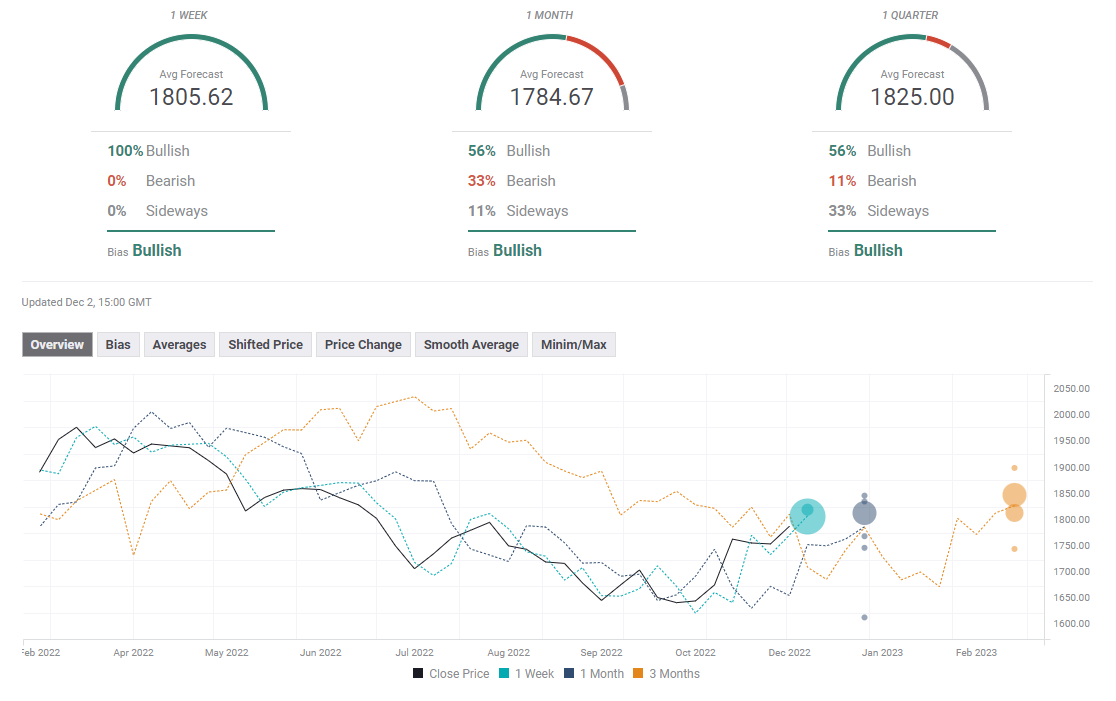