Following the previous week’s downward correction, Gold price started the week under bearish pressure and declined toward $1,730 on Monday. The renewed US Dollar weakness and retreating US Treasury bond yields, however, helped XAU/USD gain traction mid-week. As the focus shifts to next week’s highly-anticipated November jobs report from the US, the pair’s technical outlook points to a slightly bullish bias in the short term.

China reported Covid deaths for the first time since May and a few districts in Beijing shut schools amid the rising number of cases. Additionally, Guangzhou ordered a five-day lockdown of its Baiyun district while several cities ordered mass testing. Renewed concerns over China bringing back strict restrictions and the potential negative impact of the zero-Covid policy on the demand outlook for the precious metal caused XAU/USD to push lower at the beginning of the week.

With markets brushing aside China jitters on Tuesday, Gold price managed to stage a rebound as the improving market mood made it difficult for the US Dollar to find demand.

On Wednesday, XAU/USD rose sharply in the second half of the day and came within touching distance of $1,760.

The data published by S&P Global revealed that the business activity in the private sector continued to contract at an accelerating pace in November with the Composite PMI dropping to 46.3 from 48.2 in October. This reading missed the market expectation of 47.7 and triggered a US Dollar sell-off. Commenting on the data, Chris Williamson, Chief Business Economist at S&P Global Market Intelligence, explained that the rate at which output and demand fall was consistent with the economy contracting at an annualized rate of 1%. “Inflationary pressures should continue to cool in the months ahead, potentially markedly, but the economy meanwhile continues to head deeper into a likely recession.”

Later in the day, the minutes of the Federal Reserve’s last policy meeting showed that most policymakers backed slowing the pace of rate increases so they would have more time to evaluate the lagging effects of the policy actions on the economy. Additionally, the publication revealed that the Fed staff saw it was possible for the economy to enter a recession sometime over the next year. In turn, the benchmark 10-year US Treasury bond yield declined to its lowest level since early October at 3.65% and helped XAU/USD continue to push higher late Wednesday.

In the second half of the week, financial markets stayed relatively quiet as trading conditions thinned out amid the Thanksgiving Holiday in the US. Nevertheless, with China reporting a record daily high of 32,695 coronavirus cases, Gold price failed to carry its bullish momentum into the weekend and ended up closing the week virtually unchanged near $1,750.

There won’t be any high-impact data releases on Monday and investors should stay focused on coronavirus headlines from China. In case China continues to tighten restrictions over the weekend, XAU/USD could start the week on the back foot.

The Conference Board’s Consumer Confidence Index will be featured in the US economic docket on Tuesday. Market participants, however, are likely to refrain from basing their trading positions on this data ahead of the upcoming key data releases of the week.

On Thursday, the ISM will release the Manufacturing PMI data for November. The headline PMI is forecast to fall to 49.3 from 50 in October and the Prices Paid Index component is expected to rise to 50.4 from 46.6. The market reaction to S&P Global’s PMI surveys suggests that the US Dollar might come under selling pressure if the ISM’s PMI report shows that price pressures continued to ease in November while the activity contracted. In that scenario, Gold price could push higher with the initial reaction.

The US Bureau of Labor Statistics will publish labor market data for November on Friday. Nonfarm Payrolls (NFP) are projected to decline by 30,000 following October’s growth of 261,000. A negative print is likely to weigh heavily on the US Dollar and open the door for a bullish XAU/USD action ahead of the weekend. The CME Group’s FedWatch Tool shows that markets are currently pricing in a 71% probability of a 50 basis points (bps) Fed rate hike in December. A disappointing jobs report could confirm a smaller rate increase and even revive expectations for a policy pivot next year. Such market assessment should cause the US T-bond yields to fall sharply and help XAU/USD preserve its bullish momentum. On the other hand, a positive NFP surprise should have the opposite effect on financial markets and force Gold price to decline. 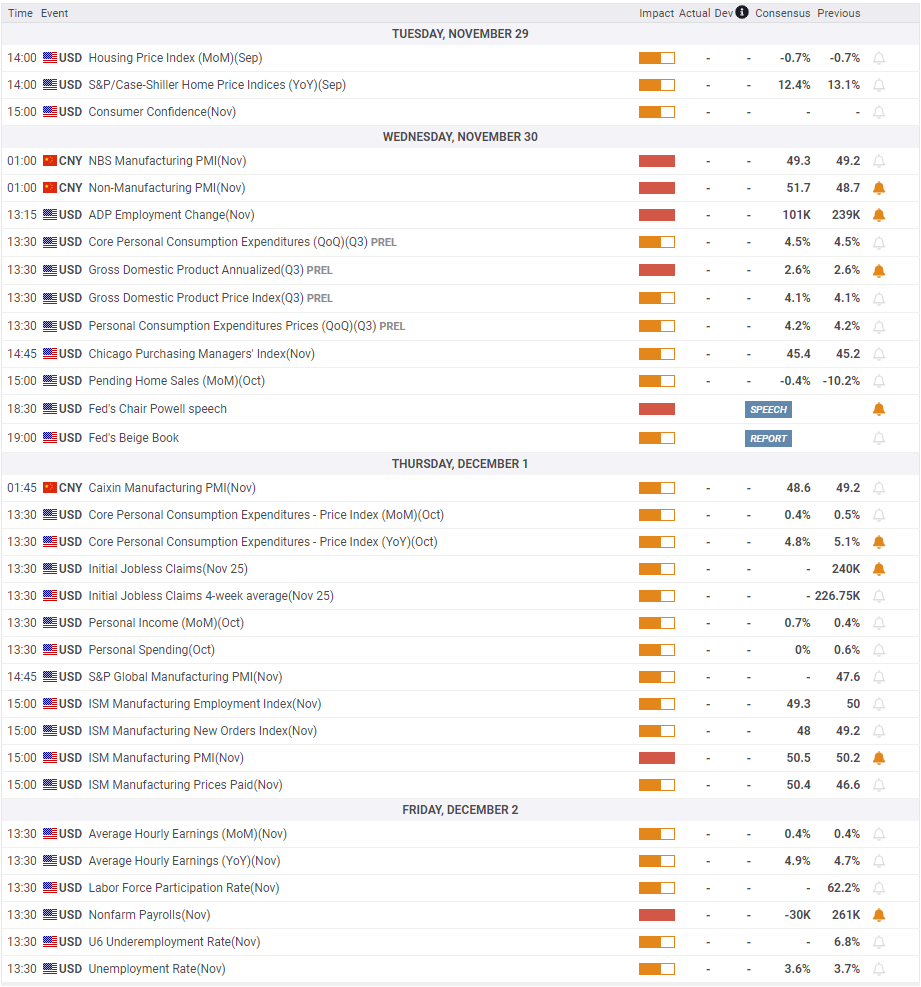 Gold price seems to have lost its bullish momentum following this week's action with the Relative Strength Index (RSI) indicator on the daily chart retreating slightly below 60. Nevertheless, XAU/USD holds comfortably above the 20-period Simple Moving Average (SMA), suggesting that sellers remain on the sidelines for the time being.

$1,780 (Fibonacci 38.2% retracement of the March-November downtrend) aligns as initial resistance. With a daily close above that level, XAUUSD could test $1,800 (200-day SMA) and target $1,830 (Fibonacci 50% retracement) if it manages to clear that resistance.

The FXStreet Forecast Poll shows that XAU/USD near-term outlook is overwhelmingly bullish with the one-week target sitting at $1,775. The one-month outlook remains mixed but the majority of polled experts see Gold price rising above $1,800 on a one-quarter view. 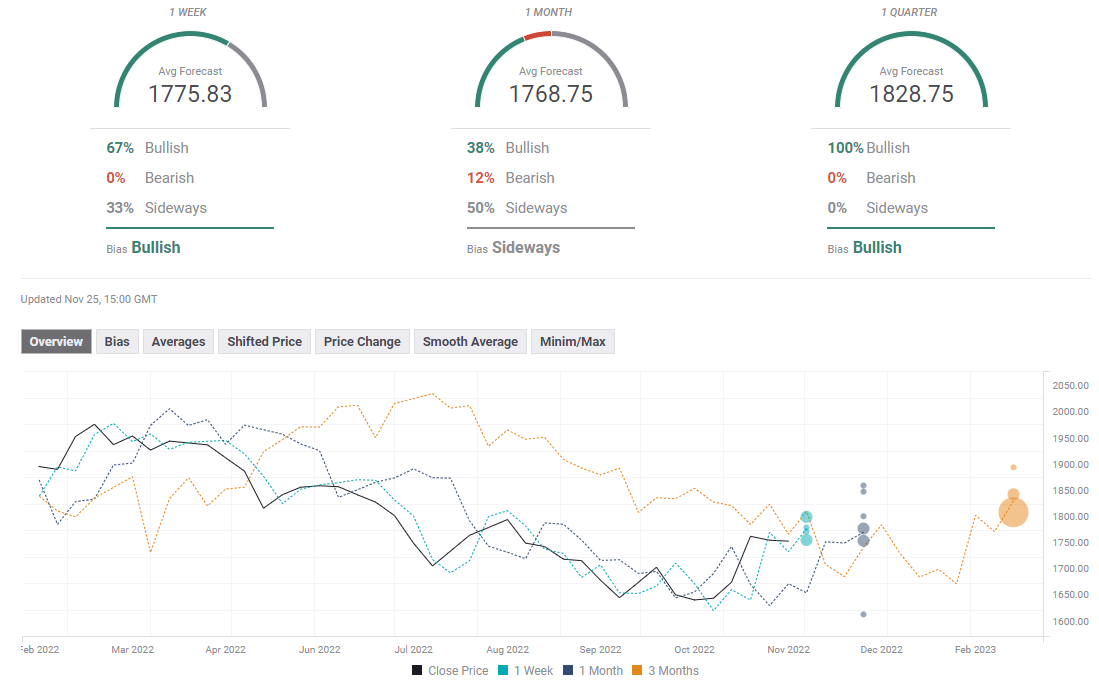