Gold witnessed a modest pullback from the vicinity of the $1,760-65 resistance zone during the Asian session on Friday and eroded a part of the overnight gains to five-week tops. As investors digested a stubbornly dovish Fed, the US dollar index staged a goodish bounce from the 92.00 mark amid a modest pickup in the US Treasury bond yields. This, in turn, was seen as a key factor that exerted some downward pressure on the dollar-denominated commodity.

In the latest FOMC meeting minutes released on Wednesday, the Fed reiterated its commitment to extend monetary policy support until the recovery was more secure. Adding to this, Fed Chair Jerome Powell said on Thursday that the stance would only shift after a few consecutive months of positive data. Separately, St. Louis Fed President James Bullard said that the central bank should not even discuss changes until there are clear signs that the pandemic is over.

This forced investors to reassess their expectations about an earlier than anticipated Fed rate hike and allowed the non-yielding yellow metal to build on its recent bounce from multi-month lows. That said, investors remain convinced that a relatively faster US economic recovery could force the Fed to raise interest rates sooner rather than later. In fact, the markets have been pricing in a lift-off by the end of 2022 vs the Fed's projection to keep rates near-zero through 2023.

Apart from this, a generally positive tone around the equity markets was seen as another factor weighing on the safe-haven XAU/USD. There isn't any major market-moving economic data due for release from the US on Friday, leading the commodity at the mercy of the USD price dynamics, the US bond yields and the broader market risk sentiment. This makes it prudent to wait for some strong follow-through selling before confirming that the two-week-old upward trajectory has run out of steam and positioning for the resumption of the prior/well-established bearish trend.

From a technical perspective, failure near previous strong support, now turned resistance around the $1,760-65 region, warrants caution for bullish traders. The mentioned barrier marks the neckline of a bullish double-bottom pattern, which if cleared decisively will set the stage for additional gains. The commodity might then accelerate the momentum towards an intermediate resistance near the $,1,782-84 area before eventually aiming to reclaim the $1,800 round-figure mark.

On the flip side, any further pullback below the $1,740 level might find some support near the $1,730 level ahead of the $1,720 horizontal zone. Failure to defend the mentioned support levels might negate the positive outlook and prompt some technical selling. Bears might then challenge the $1,700 mark and drag the metal back towards the double-bottom support near the $1,677-76 region. Some follow-through selling should pave the way for a slide towards the $1,625 region en-route the $1,600 round-figure mark. 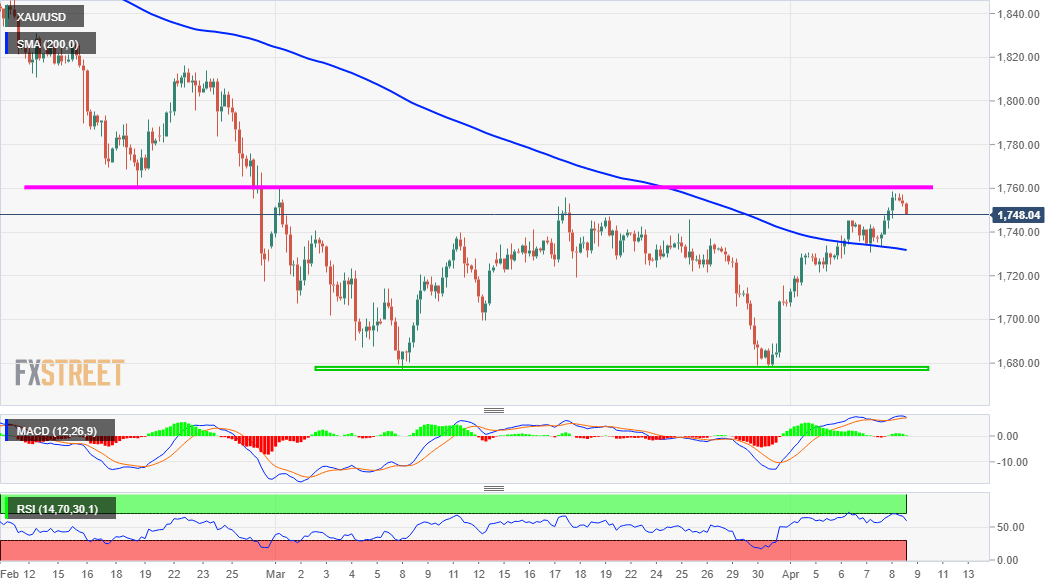