Gold attracted some dip-buying on Wednesday and rallied nearly $20 from daily swing lows, around the $1,770 area. The uptick assisted the commodity to recover a part of the previous day's losses led by comments from the US Treasury Secretary Janet Yellen. In an interview with the Atlantic that was aired on Tuesday, Yellen suggested that the Fed may need to raise interest rates to keep the economy from overheating. Yellen later clarified that she was neither predicting nor recommending that the Fed raise rates, which, in turn, extended some support to the non-yielding yellow metal.

Apart from this, a modest US dollar pullback from two-week highs extended some additional support to the dollar-denominated commodity and remained supportive of the intraday uptick. The USD witnessed some selling following the release of softer-than-expected US macro data. The ADP report showed that the US private-sector employers added 742K jobs in April. The reading, however, was well below consensus estimates. Adding to this, the US ISM Services PMI also fell short of market expectations and dropped to 62.7 in April from a record high level of 63.7 touched in the previous month.

The commodity finally settled near the top end of its daily trading range and gained some follow-through traction through the Asian session on Thursday. This marked the second consecutive day of a positive move and seemed rather unaffected by a generally positive risk tone, which tends to undermine demand for the safe-haven XAU/USD. There isn't any major market-moving economic data due for release from the US on Thursday. Hence, it remains to be seen if bulls are able to capitalize on the momentum or the commodity continues with its struggle to make it through the $1,800 round-figure mark.

Investors look forward to Friday's closely-watched US monthly employment details for April. The popularly known NFP report may provide clues on when the Fed would scale back its stimulus, which, in turn, should assist investors to determine the next leg of a directional move for the metal.

From a technical perspective, nothing seems to have changed much and bulls might still wait for a sustained move beyond the $1,800 mark before placing fresh bets. This will set the stage for a further near-term appreciating move and push the commodity to the $1,813-15 intermediate hurdle en-route the $1,845-50 resistance zone. Some follow-through buying has the potential to lift the XAU/USD further towards the $1,872-74 supply zone.

On the flip side, immediate support is now pegged near the $1,782-80 region. This is followed by the overnight swing lows, around the $1,770 area. Failure to defend the mentioned support levels might prompt some technical selling and drag the metal back below the $1,760 level. Sustained weakness below will be seen as a fresh trigger for bearish traders and expose intermediate support near the $1,745-44 zone. The downward trajectory could further get extended to the $1,726-24 horizontal support before the commodity eventually drops to challenge the $1,700 mark. 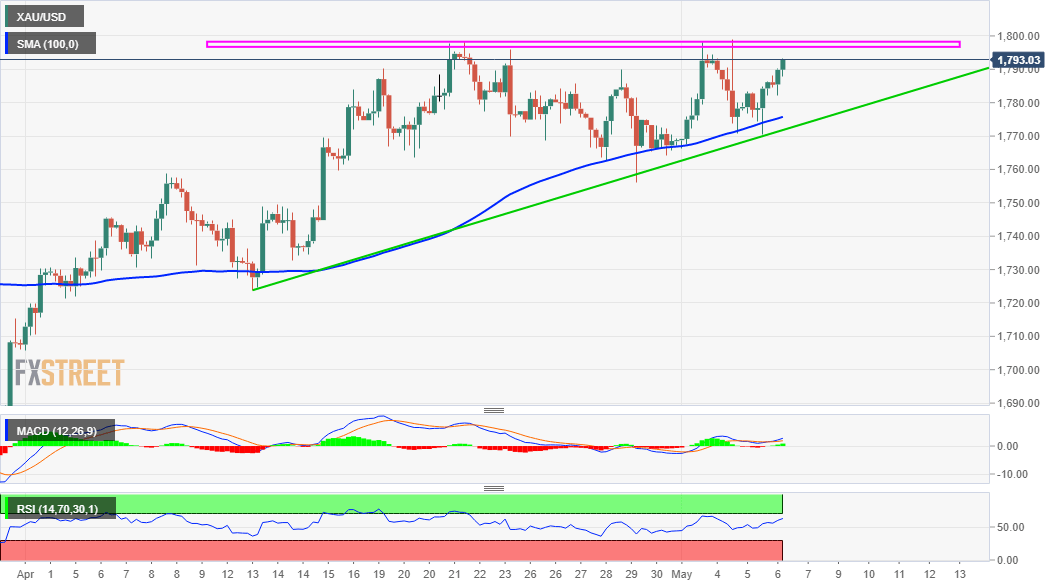