Gold edged lower during the Asian session on Monday and erased the previous session's modest gains, albeit lacked any strong follow-through selling. The US dollar built on its recovery from the post-FOMC swing lows and kicked off the new week on a stronger footing amid the upbeat US economic outlook. Investors remain optimistic about a relatively faster US recovery from the pandemic, which has been fueling expectations for an uptick in inflation and raised doubts that the Fed would retail ultra-low interest rates for a longer period. This, in turn, exerted some pressure on the dollar-denominated commodity.

That said, the ongoing pullback in the US Treasury bond yields kept a lid on any strong gains for the USD. In fact, the yield on the benchmark 10-year US government bond retreated further from over one-year tops touched last week, which was seen as a key factor that helped any further losses for the non-yielding yellow metal. Apart from this, the prevalent cautious mood around the equity markets further drove investors towards the safe-haven XAU/USD. Turkish President Tayyip Erdogan's surprise move to replace the central bank governor stunned investors and raised fears about disruptions in other asset classes.

The precious metal has managed to recover a major part of its early losses and was last seen trading just above the $1740 level. The upside, however, seems limited as investors seemed reluctant from placing bullish bets ahead of the Fed Chair Jerome Powell's speech in a virtual panel discussion. Powell and Treasury Secretary Janet Yellen will also make their first joint appearance before the US House Financial Services Committee on Tuesday to testify on Fed and Treasury COVID-19 policies. In the meantime, the broader market risk sentiment, US bond yields and the USD price dynamics might continue to influence the precious metal.

From a technical perspective, the commodity, so far, has managed to defend a short-term ascending trend-line support. However, the lack of any strong follow-through buying beyond the $1740-42 supply zone warrants some caution before positioning for any further appreciating move. This, coupled with the fact that the post-FOMC positive move faltered ahead of the $1760-65 horizontal support-turned-resistance, favours bearish traders. A sustained break below the mentioned trend-line support, currently near the $1728 region will reaffirm the negative bias and pave the way for further weakness.

The commodity might then turn vulnerable to break through the $1720 intermediate support and accelerate the slide towards the $1700 mark. The downward trajectory could further get extended and rag the metal back towards the multi-month low, around the $1677-76 region touched earlier this month. The next relevant bearish targets are pegged near the $1650 zone ahead of the $1625-20 region and the $1600 mark.

On the flip side, any meaningful upside might continue to confront stiff resistance near the $1760-65 region. A convincing breakthrough might trigger a short-covering move and push the metal further towards reclaiming the $1800 round-figure mark. This is followed by resistance near the $1813-15 supply zone, which if cleared decisively will set the stage for a further near-term appreciating move. 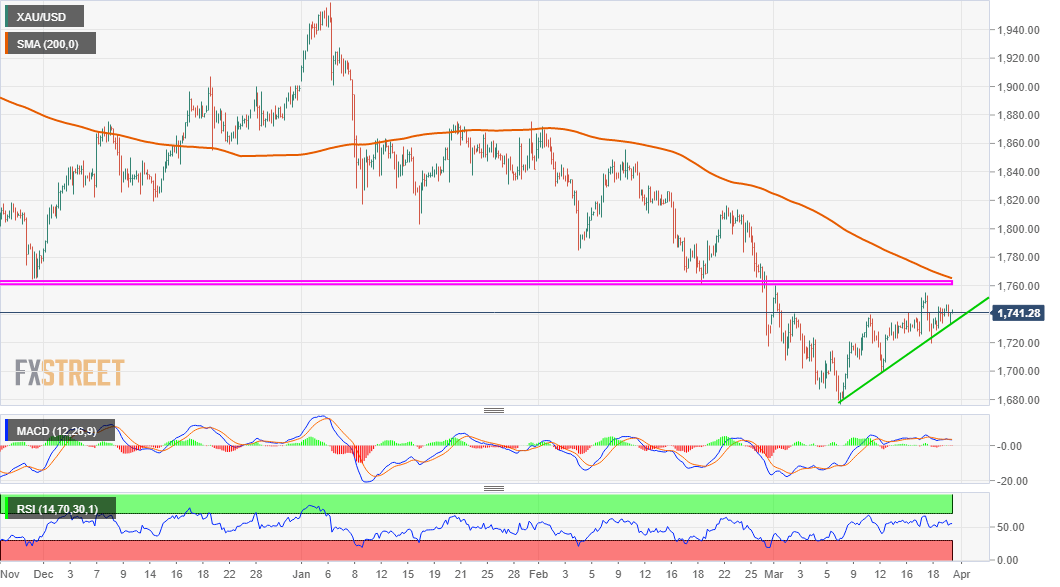