Inflation surged in May, and some worry that it has already reached its peak. Has it indeed? This issue is key for the Fed and the gold market.

Inflation has soared recently. The CPI annual rate surged 5% in May, which was the fastest jump since the Great Recession. However, the Fed officials still maintain that inflation will only be temporary. Some of the analysts even claim that inflation has already peaked, and it will decelerate from now on. Are they right?

Well, they present a few strong arguments. First, there is no doubt that the recent rise in prices has been partially caused by the problems with the supply chains. But, luckily, the bottlenecks are short-lived phenomena, and they always resolve themselves, i.e., by the magic of market mechanism. The best example may be lumber prices which were skyrocketing earlier this year but which have recently declined, as production surged in response to rallying prices.

Second, the detailed data on inflation shows that the surge in the overall inflation index was partially driven by categories that were heavily distorted by the pandemic, such as used cars or airline fares. The increases in these categories are not surprising or worrying, given the current recovery from the epidemic.

Third, the market-based inflation expectations have already peaked. As the chart below shows, both 5-year and 10-year breakeven inflation rates have reached their heights in May. Since then, the former ones have declined from above 2.7% to about 2.3%, while the latter from above 2.5% to about 2.2% 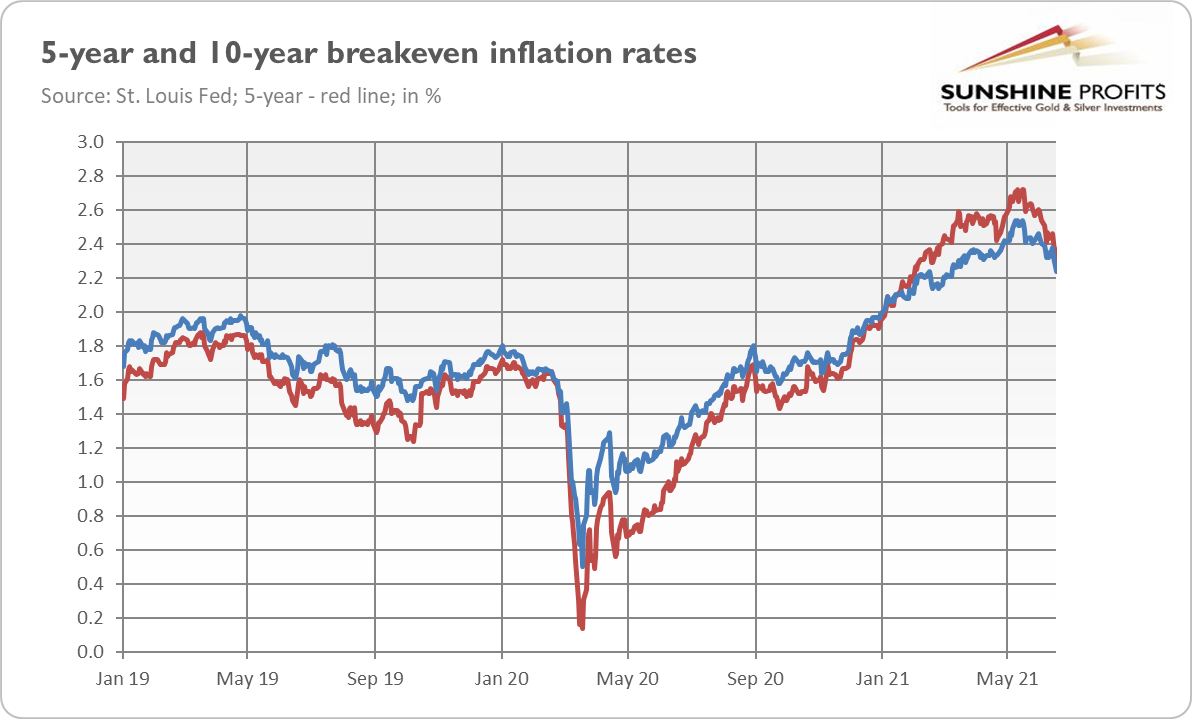 It means that the markets bought the Fed’s narrative about temporary inflation and started to worry less about it.

Should gold investors do the same? I’m not so sure. To be clear, I acknowledge and always acknowledged that the supply problems contributed to the acceleration in inflation. However, the risk of inflation doesn’t solely depend on continuously rising commodity prices. And the Fed officials always say that increases in inflation rates are temporary, as they don’t want to admit they failed in maintaining price stability.

Some fundamental factors supporting high inflation are still in force. First, as the chart below shows, the broad money supply is still increasing fast (although there was a deceleration since February), as the monetary impulses probably haven’t been fully transmitted into the real economy yet. 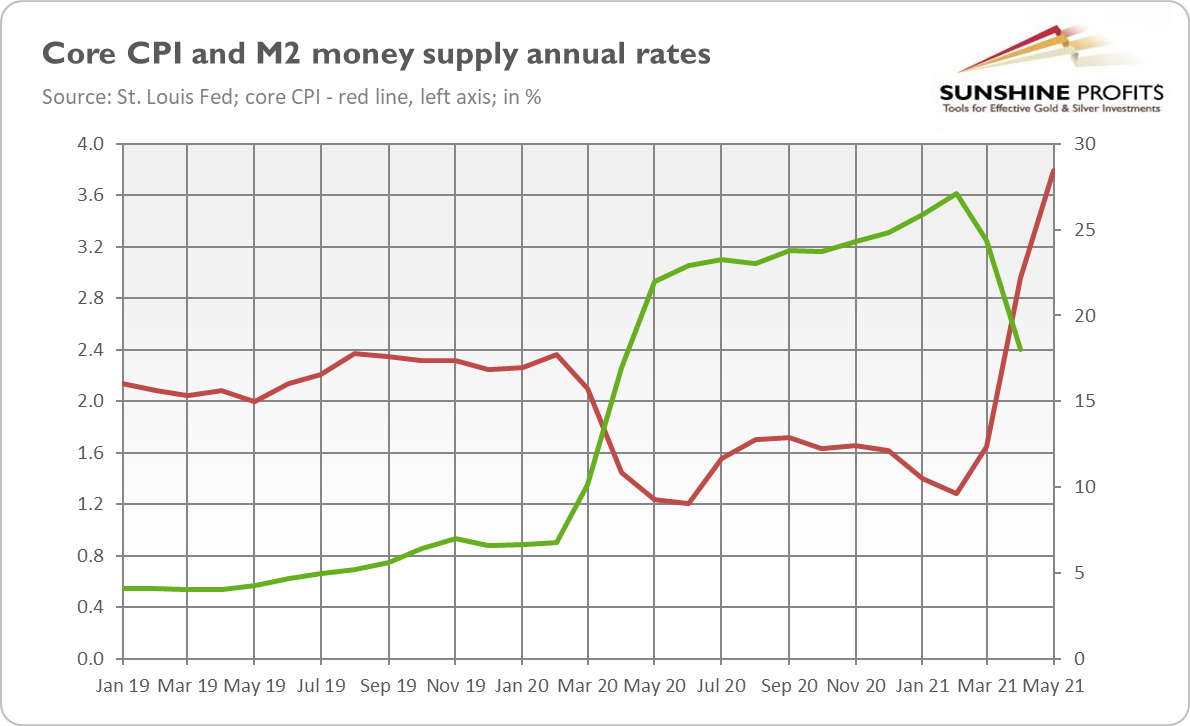 Second, both the monetary and fiscal policies remain very easy. Given President Biden’s fiscal agenda and the continuous increase in the public debt, the Fed is unlikely to materially normalize its monetary policy.

Third, we know that in response to input cost inflation, producers raised their charges at an unprecedented pace. It means that their power to pass on greater costs has increased, which could increase both inflation and consumers’ expectations of inflation in the future.

Fourth, we have just finished recovering from the economic crisis. Usually, inflationary pressures only intensify with the progress of the business cycle. With a developing and then maturing economic expansion, employment will rise, manufacturing capacity will be more fully utilized, and inflation could prove to be more persistent than anticipated by the pundits. Please remember that the fiscal stimulus the economy got was greater than the estimated size of the output gap, so the risk of overheating is still present, even if some bottlenecks have resolved.

Last but not least, the rise in inflation wasn’t driven solely by the recovery from the pandemic. Some categories which were severely hit by the epidemic are not surging. For example, the index for food away from home rose annually by 4% in May 2021. Meanwhile, some core components surged. For instance, the index for shelter, which makes almost one-third of the overall index, increased from 1.5% in February to 2.2% in May 2021, as the chart below shows. It suggests that inflation may be more broad-based than many analysts think. 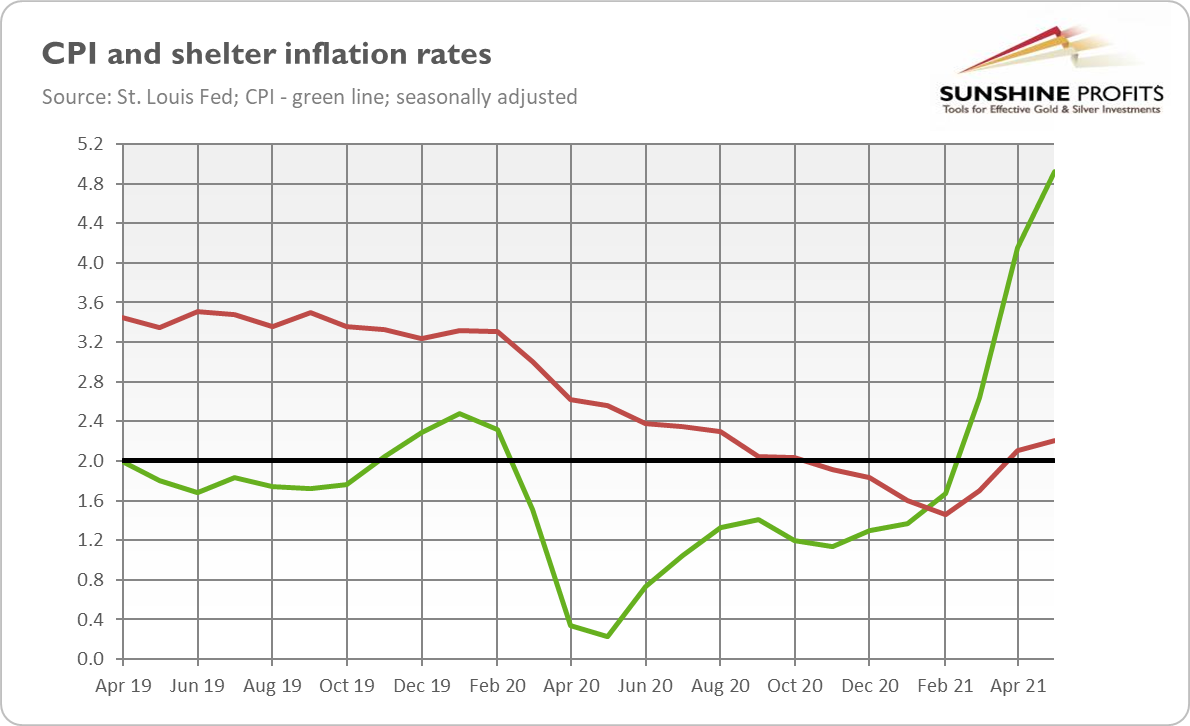 What does all this mean for the gold market? Well, if inflation remains high or even continues to rise, the real interest rates will remain in negative territory, supporting gold prices. However, there is an important caveat: upward inflationary surprises could force the Fed to send fresh hawkish messages or even taper its quantitative easing earlier than planned, pushing the nominal bond yields higher and creating selling pressure on gold prices.

It seems that so far investors were more worried by the sooner-than-expected hikes in the federal funds rate than by the rising inflation and the fact that the FOMC members have raised their inflation forecasts by an entire percentage point. Gold bulls need a shift in investors’ focus. Otherwise, the markets could remain optimistic about the future, purchasing risky assets rather than safe havens such as gold.