The US dollar’s weakness extended at the start of the week on Monday, as risk flows dominated amid a reduced probability of a 75 bps Fed rate hike in September. GBP/USD built on last week’s 150 pips gains and hit the highest level in four weeks at 1.2293, in anticipation of a 50 bps rate hike by the BOE to combat inflation. But the greenback sprung back to life towards the mid-week, as recession fears amplified alongside escalating geopolitical tensions. The safe-haven bids for the dollar resurfaced ahead of US House of Representatives Speaker Nancy Pelosi’s visit to Taiwan, despite China’s warning against the US going through with the visit. Meanwhile, investors assessed the mixed US ISM Manufacturing and Services PMI data, as the Treasury yields continued to struggle at lower levels, which signaled at an incoming recession.

The hawkish commentary from Fed policymakers Charles Evans, James Bullard and Mary Daly jacked up odds for a 75 bps Sept lift-off back to around 50%, offering the much-needed support to dollar bulls. Further, upbeat US corporate earnings results eased recession fears while markets believed that the Fed could stick to its tightening path through the balance of this year. GBP/USD tested the 1.2100 demand area ahead of Thursday’s BOE rate hike verdict. The downbeat UK data undermined the pound further, as it showed that the country’s business activity service sector expanded at its weakest pace in 17 months. The UK final S&P Services PMI dropped to 52.6 in July from 54.3 in June vs. 53.3 expectations.

The currency pair came under renewed selling pressure after the pound wilted on the BOE’s projection of a recession later this year. The central bank hiked the key rates by 50 bps to 1.75%, as widely expected but mentioned that it is not on a pre-set tightening path. The inflation forecasts were revised up to above 13% by October. Cable hit a five-day low of 1.2065 on the dovish BOE rate hike but managed to recoup some of its losses, as the US dollar lost ground alongside the yields after the weekly Initial Jobless Claims rose by 260K, hovering near an eight-month peak.

On the final trading day of the week, the pair returned to the red amid pre-NFP anxiety. With the US Bureau of Labor Statistics reporting a 528,000 increase in NFP, compared to the market expectation of 250,000, the dollar gathered strength and forced GBP/USD to extend its slide toward 1.2000. Further details of the jobs report showed that the annual wage inflation remained steady at 5.2%.

Week ahead: US inflation and UK GDP stand out

The week ahead makes up for a slow start from an economic data release perspective leading into an eventful second half. Wednesday’s US Consumer Price Index (CPI) and UK quarterly GDP are likely to hog the limelight. Besides, US-China tensions over Taiwan, recession fears and Fed tightening expectations will continue to lead sentiment.

Monday is absolutely data-empty on both sides of the Atlantic while Tuesday will see the release of minor US reports, in the Preliminary Unit Labor Costs and Prelim Nonfarm Productivity.

The US monthly inflation will be reported on Wednesday, which will have a strong market impact, as the current inflation rate stands at the highest level since November 1981 at 9.1%, on an annualized basis. Hotter CPI figures will reinforce the need for a super-sized rate hike by the Fed at its next meeting, which could lift the dollar at the expense of the pound.

Thursday’s US weekly Jobless Claims and Producer Price Index (PPI) data will also be critical to shaping up the Fed expectations. On Friday, the attention will turn towards the UK, as it publishes its monthly and quarterly GDP data. It’s the first estimate of the Q2 GDP and will hold utmost significance for the pound traders, especially given, the BOE’s latest gloomy economic outlook. The country’s manufacturing and industrial production data will also be released in parallel.

On the US macro front, the Preliminary UoM Consumer Sentiment and Inflation Expectations data will wrap up another crucial week. 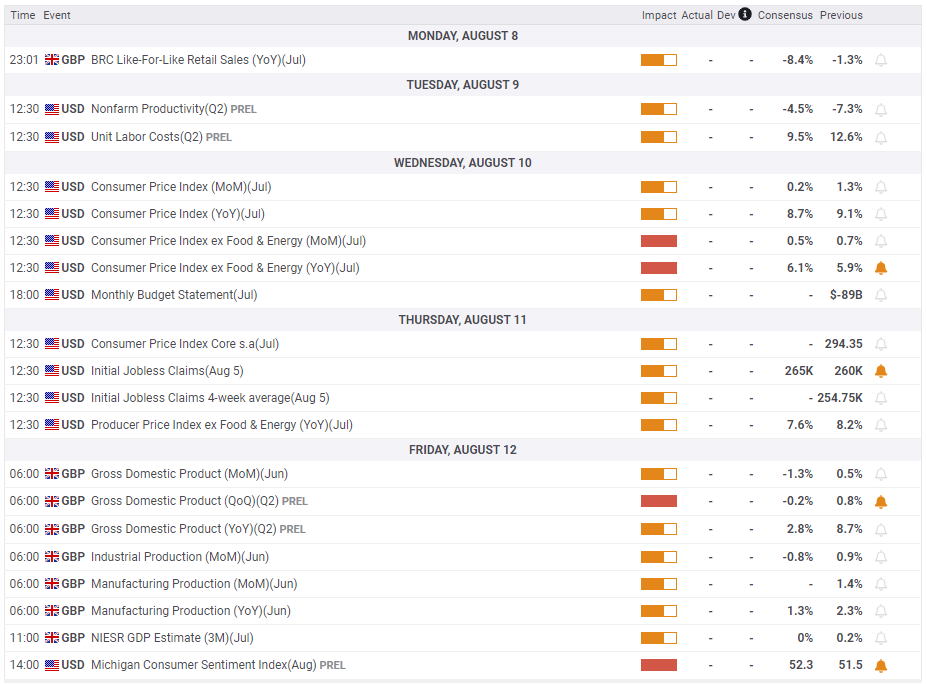 GBP/USD broke below the ascending trend line coming from July 14 and the Relative Strength Index (RSI) indicator on the daily chart dropped below 50. Both of these technical developments point to a bearish tilt in the near term but bulls could try to retain control as long as the 21-day SMA, which is currently located at 1.2030, stays intact. 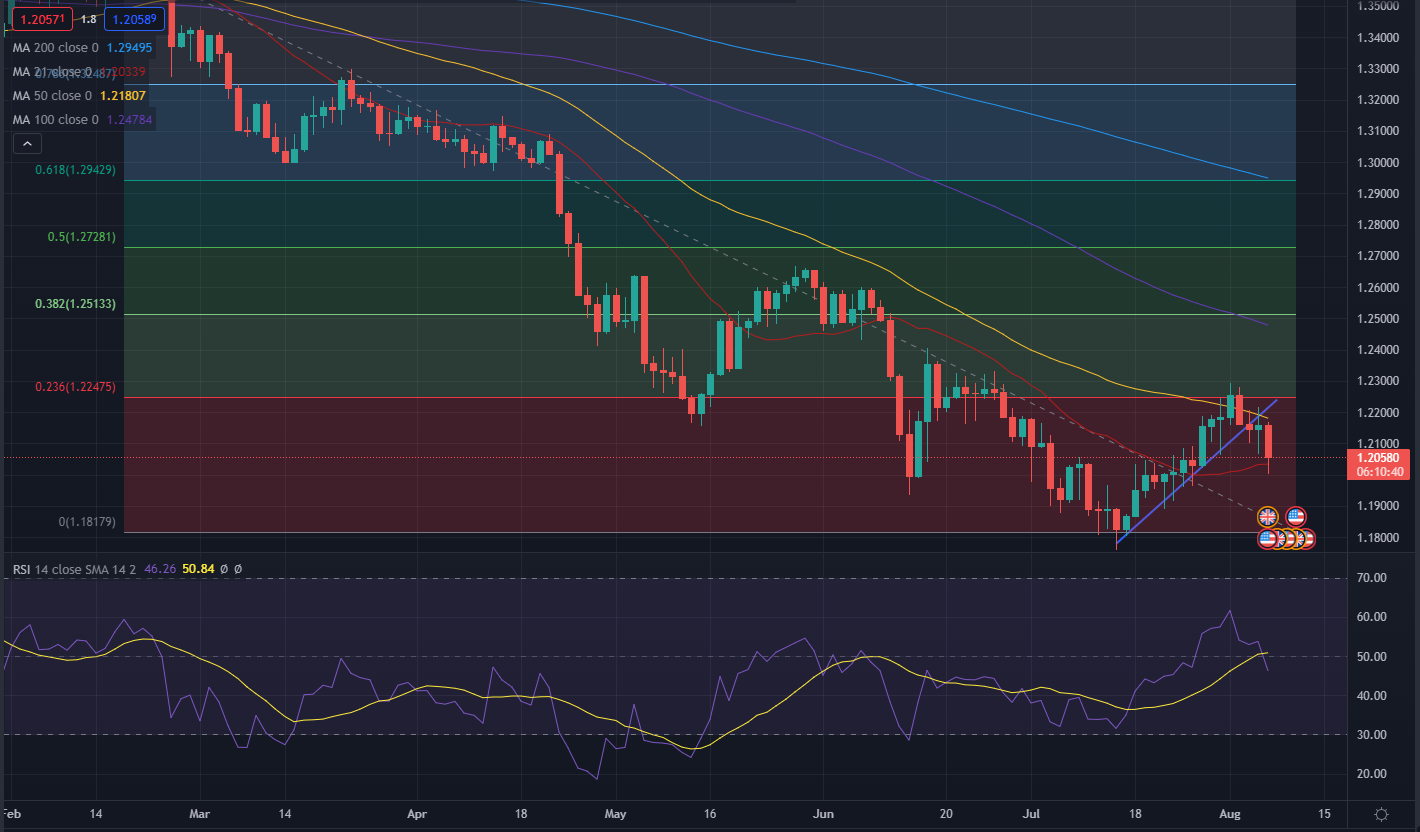 EURUSD retreats below 1.0300 amid profit taking