GBP/USD bulls succeeded after a down week, although it remains to be seen if they can extend the upbeat momentum in the week ahead, with Fed minutes set to steal the limelight. Broad-based US dollar weakness on soft inflation and falling bets for a super-sized Fed rate hike in September, however, may help.

After finishing the previous week deep in the red amidst a bumper US Nonfarm Payrolls report, bulls attempted a comeback at the start of the week. The US dollar failed to sustain strong jobs data-led gains, as Treasury yields tumbled in anticipation of the critical Consumer Price Index (CPI) release. The US economy added 528,000 jobs in July, beating the expectation of 250,000 and the Unemployment Rate dropped to 3.5% from 3.6%. The CME Group FedWatch Tool showed Monday that markets had priced in a nearly 70% chance of a 75 bps rate increase in September. Tuesday also saw more or less the same downside consolidative mode, as a bull-bear tug-of-war extended amid pre-US inflation cautious trading. Investors digested comments from Bank of England (BOE) Deputy Governor Dave Ramsden, as he showed the central bank’s willingness to continue selling gilts even if a recession pushes it to start lowering the policy rate.

On Wednesday, US CPI dropped a bomb on USD bulls, as the US dollar index plunged in tandem with the yields after inflation in the world’s largest economy eased more than expected across the time frame. The US CPI inflation eased to 8.5% YoY and to 0% MoM, while the core figures arrived at 5.9% and 0.3%, annually and monthly respectively. Odds of a 75 bps Sept Fed rate hike got smashed to 32%, down from 68% pre-data release. The risk rally picked up steam on expectations of shallower Fed rate hike in the coming months, which lifted the higher-yielding GBP.

However, the hawkish Fed commentary, renewed US-China trade tensions and China’s covid lockdown concerns kept the dollar supported at lower levels, capping the upside attempts in cable. Markets believed that a single inflation data point is not enough to stop the Fed’s rate-hike track, as the world’s most powerful central bank remains committed to tame inflation. In light of this, the probability of a super-sized rate increase next month rose to roughly around 40% and continued to keep dollar bulls hopeful.

Friday’s upbeat UK GDP and industrial figures failed to impress GBP bulls and left the pair wavering around the 1.2200 region. The UK economy slipped into a 0.1% contraction in the first quarter, albeit slightly better than expectations of -0.2%. Meanwhile, the UK Manufacturing Production declined 1.6% MoM in June vs. -1.8% expected. In the American session, the dollar extended its recovery with the long-run inflation outlook of the University of Michigan's Consumer Sentiment Survey rising to 3% from 2.9% and forced GBP/USD to edge lower toward 1.2100.

A critical week ahead

China’s economic activity data, in terms of the Retail Sales and Industrial Production, will grab attention on the first trading day of the new week, which lacks top-tier macro news from the US as well as the UK. Chinese data could have a significant impact on risk sentiment and broader markets.

The UK will publish the labor market report on Tuesday while the US calendar will see the housing starts and building permits data.

Wednesday is crucial for cable traders, as the UK inflation and US Retail Sales data will precede the all-important Fed July meeting’s minutes. Hints on the Fed’s future policy path will be eagerly awaited after the US jobs blowout and a softer CPI print.

It’s a quiet Thursday for UK traders, in absence of any relevant economic data but the US will see a raft of releases in the weekly Jobless Claims, Existing Home Sales and Philly Fed Manufacturing Index.
The UK consumer spending data, as represented by Retail Sales, will be published on Friday and will wrap up a big week for the currency pair. 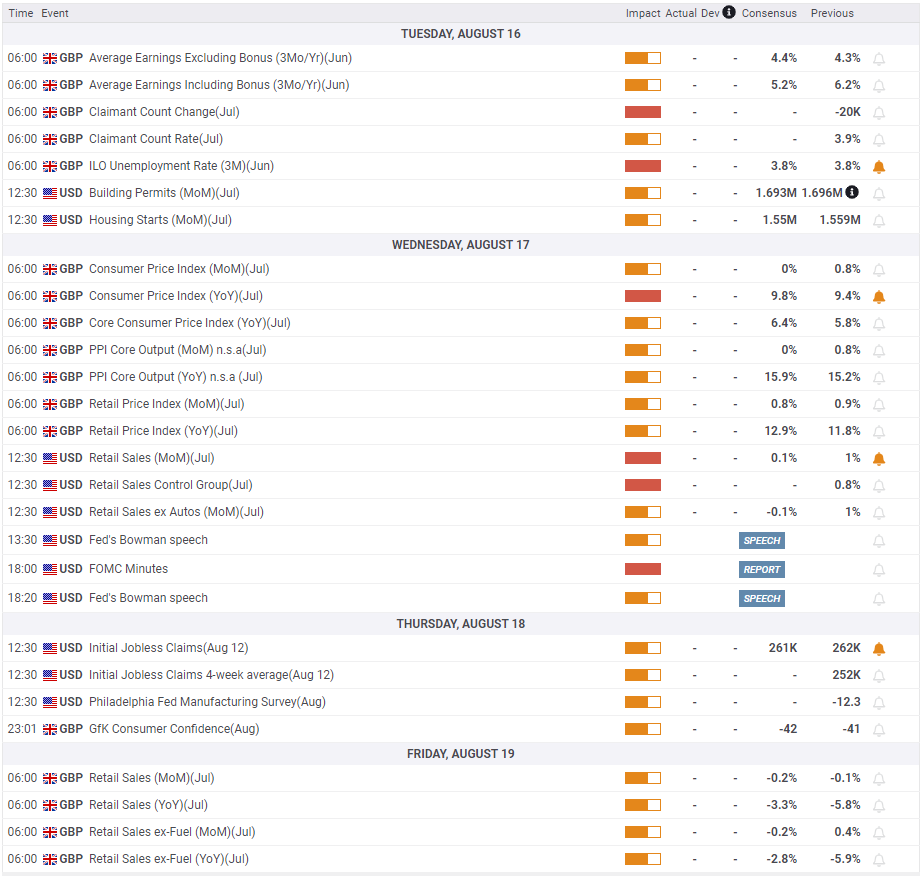 The Relative Strength Index on the daily chart declined to 50 on Friday and GBP/USD failed to hold above the 50-day SMA, pointing to a loss of bullish momentum.

On the upside, the Fibonacci 23.6% retracement of the long-term downtrend seems to have formed significant resistance at 1.2265. With a daily close above that level, an extended recovery toward 1.2400 (100-day SMA) and 1.2500 (Fibonacci 38.2% retracement) could be witnessed.

1.2100 (static level, psychological level, 20-day SMA) aligns as immediate support for GBP/USD. If that level fails, sellers could take action and trigger a decline toward 1.2000 (psychological level) and 1.1800 (the end-point of the downtrend).