The GBP/USD pair built on the previous session's solid rebound from two-and-half-week lows and gained strong follow-through traction on the last trading day of the week. The British pound remained well supported by the fact that the Bank of England on Thursday pushed back expectations for negative interest rates and progress in coronavirus vaccinations in the UK. Apart from this, the emergence of some fresh selling around the US dollar provided an additional boost to the major.

The greenback lost some additional ground following the release of mixed US monthly employment details, which showed that the economy added only 49K jobs in January. The previous month's reading was also revised down sharply to -227K from -140K reported earlier and largely offset an unexpected fall in the unemployment rate, to 6.3% from 6.7% in December. That said, the continuous surge in the US Treasury bond yields helped limit any further losses for the greenback.

Meanwhile, the NFP report further strengthened the case for more fiscal support. Bets for a massive US stimulus package increased further after the US Senate approved a budget resolution to fast track the President Joe Biden's proposed $1.9 trillion coronavirus relief plan to be approved without Republican support. This, in turn, pushed the yield on the benchmark 10-year US government bond to one year tops and extended some support to the USD during the Asian session on Monday.

However, the underlying bullish sentiment in the financial markets undermined the safe-haven USD and assisted the pair to hold above the 1.3700 mark. In the absence of any major market-moving economic releases, either from the UK or the US, the pair remains at the mercy of the USD price dynamics. The incoming US stimulus headlines, the US bond yields, along with the broader market risk sentiment will influence the USD and produce some meaningful trading opportunities.

From a technical perspective, bulls are likely to wait for a sustained move beyond the 1.3755-60 congestion zone, or multi-year tops, before positioning for any further appreciating move. Some follow-through buying beyond May 2018 swing highs, around the 1.3770 region, will mark a fresh bullish breakout and pave the way for a move beyond the 1.3800 level, towards the 1.3840 resistance zone. The momentum could further get extended towards the 1.3900 round-figure mark before the pair eventually aims to test the next major hurdle near the 1.3960 region.

On the flip side, the 1.3700 mark now seems to protect the immediate downside. This is followed by supports near the 1.3670 horizontal level and the 1.3640 region. A convincing break below will negate prospects for any further appreciating move and turn the pair vulnerable to slide further. The corrective pullback might then drag the pair back below the 1.3600 mark, towards the last week's swing lows, around the 1.3565 region. Some follow-through selling has the potential to drag the pair further towards challenging the key 1.3500 psychological mark. 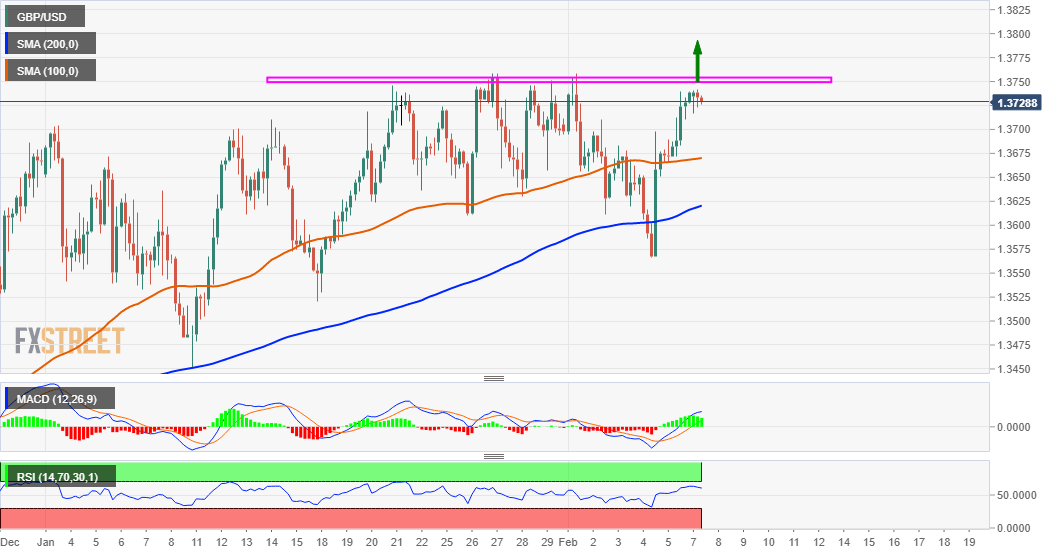