The GBP/USD pair recorded its highest gains in more than a month and surged to the highest level in almost three years on Thursday. The British pound's relative outperformance comes amid growing optimism that the UK's impressive pace of COVID-19 vaccinations would allow Prime Minister Boris Johnson to lift lockdown restrictions in stages and get the economy moving. This, along with the emergence of some fresh selling around the US dollar, provided an additional boost to the major and contributed to the sharp intraday momentum of nearly 150 pips.

As investors looked past Wednesday's upbeat US Retail Sales, a modest pullback in the US Treasury bond yields exerted some downward pressure on the greenback. The US bond yields started retreating from one-year tops after the FOMC meeting minutes – released on Wednesday – reaffirmed the US central bank's ultra-accommodative monetary policy stance. The USD selling bias picked up pace following the disappointing release of labor market data, which dented the recent optimism over a relatively quicker US economic recovery from the coronavirus pandemic.

In fact, the US Initial Weekly Jobless Claims unexpectedly jumped to 861K during the week ending February 13, much higher than 765K anticipated. Adding to this, the previous week's reading was also revised higher from 793K to 848K. This was enough to offset less worse Philly Fed Manufacturing Index, which came in at 23.1 for February as against consensus estimates for a fall to 20 from 26.5 previous. Even a softer tone around the equity markets did little to lend any support to the greenback's safe-haven status or stall the pair's strong move up.

Nevertheless, the pair settled near the top end of its daily range, albeit struggled to reclaim the 1.4000 psychological mark and was seen consolidating in a range through the Asian session on Friday. Market participants now look forward to the UK monthly Retail Sales data for a fresh impetus. The UK economic docket also features the release of flash Manufacturing and Services PMI prints for February. Later during the early North American session, the US flash Manufacturing PMI and Existing Home Sales data, along with the US bond yields, will influence the USD price dynamics. This, in turn, might produce some trading opportunities on the last day of the week.

From a technical perspective, the post-BoE strong move up has been along an upward sloping channel that points to a well-established short-term bullish trajectory. Meanwhile, RSI on the daily chart has moved on the verge of breaking into the overbought territory. Hence, any subsequent momentum beyond the 1.4000 mark is likely to confront stiff resistance and pause near the trend-channel hurdle, currently near the 1.4030-35 region. A convincing breakthrough will be seen as a fresh trigger for bullish traders and pave the way for an extension of the ongoing positive momentum.

On the flip side, any meaningful pullback below the daily swing lows, around mid-1.3900s might still be seen as a buying opportunity. This should help limit the downside near the 1.3900 round-figure mark. This is followed by the lower boundary of the mentioned channel, currently near the 1.3880 region, which if broken decisively might prompt some technical selling and set the stage for a near-term corrective pullback. 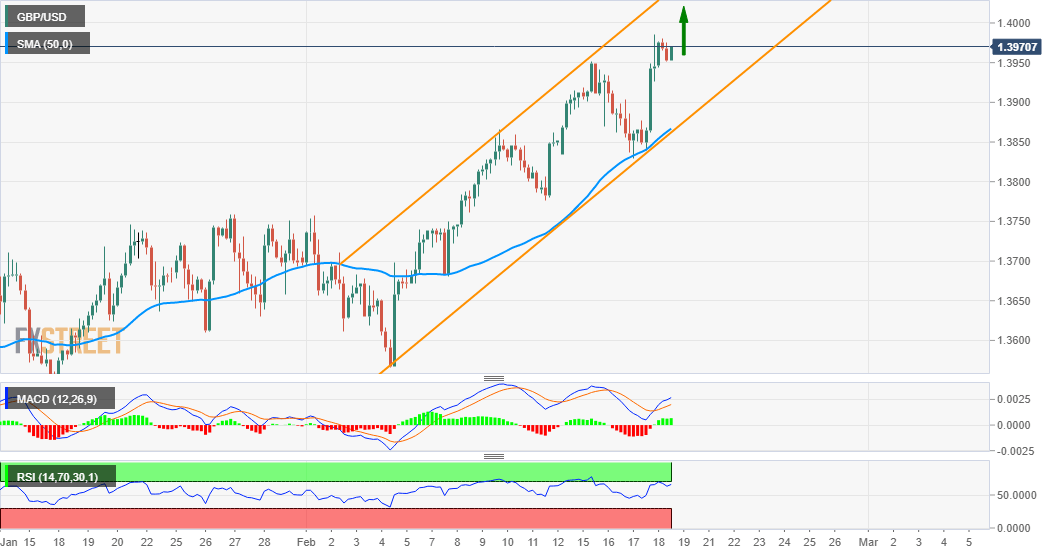