The GBP/USD pair stalled this week's retracement slide from the highest level since April 2018 and staged a goodish bounce from the vicinity of the 1.4100 mark on Wednesday. The British pound remained well supported by the optimistic outlook for the UK economic recovery amid the gradual easing of lockdown measures. In fact, UK Prime Minister Boris Johnson reiterated that there is nothing in the data at the moment that a delay to fully end restrictions from June 21 would be necessary. Adding to this, indications that the Bank of England could raise rates well into next year further acted as a tailwind for the sterling. The BoE policymaker Gertjan Vlieghe indicated last week that the central bank was likely to raise rates earlier if there is a smooth transition from furlough and the economy rebounds more quickly than expected.

On the other hand, firming expectations that the Fed will retain its ultra-lose monetary policy for a longer period failed to assist the US dollar to capitalize on its intraday positive move. Various FOMC officials have downplayed worries about runaway inflation and reiterated that any spike in prices would prove to be temporary. Investors now seem aligned with the Fed's stubbornly dovish view and have been scaling back their bets for an earlier than anticipated Fed lift-off. This, along with a softer tone surrounding the US Treasury bond yields and the underlying bullish sentiment in the equity markets, further undermined the safe-haven greenback. This was seen as another factor that contributed to the pair's intraday rally of over 70 pips. The momentum, however, lacked follow-through and ran out of steam during the Asian session on Thursday.

Market participants refrained from placing aggressive USD bearish bets and preferred to wait for a fresh catalyst from Friday's release of the closely-watched US monthly jobs report. This, in turn, capped the upside for the major, rather exerted some downward pressure. The pair was last seen hovering around mid-1.4100s as market participants now look forward to the final UK Services PMI for some impetus. Later during the early North American session, a slew of important US macro data will also be looked upon for some meaningful trading opportunities. The US economic docket highlights the releases of the ADP report on private-sector employment, the usual Initial Weekly Jobless Claims and the ISM Services PMI. This, along with the US bond yields, might influence the USD price dynamics heading into the key data risk.

From a technical perspective, the pair has been showing some resilience near the 1.4100 round-figure mark and oscillating in a familiar trading band over the past three weeks or so. This makes it prudent to wait for a convincing break through the mentioned range before positioning for the next leg of a directional move.

In the meantime, the 1.4100 mark might continue to protect the immediate downside, which if broken decisively might prompt some technical selling. The pair might then turn vulnerable to accelerate the corrective slide towards support marked by the lower boundary of a near two-month-old ascending channel, currently around the 1.4045 region. Some follow-through selling below the key 1.4000 psychological mark will shift the near-term bias in favour of bearish traders.

On the flip side, the 1.4200 mark now seems to act as an immediate hurdle. This is followed by the 1.4230-35 support zone. A sustained move beyond has the potential to push the pair further beyond YTD tops, around mid-1.4200s touched on Tuesday. The momentum might then allow bullish traders to aim to reclaim the 1.4300 round-figure mark and challenge trend-channel resistance, currently around the 1.4325-30 region. 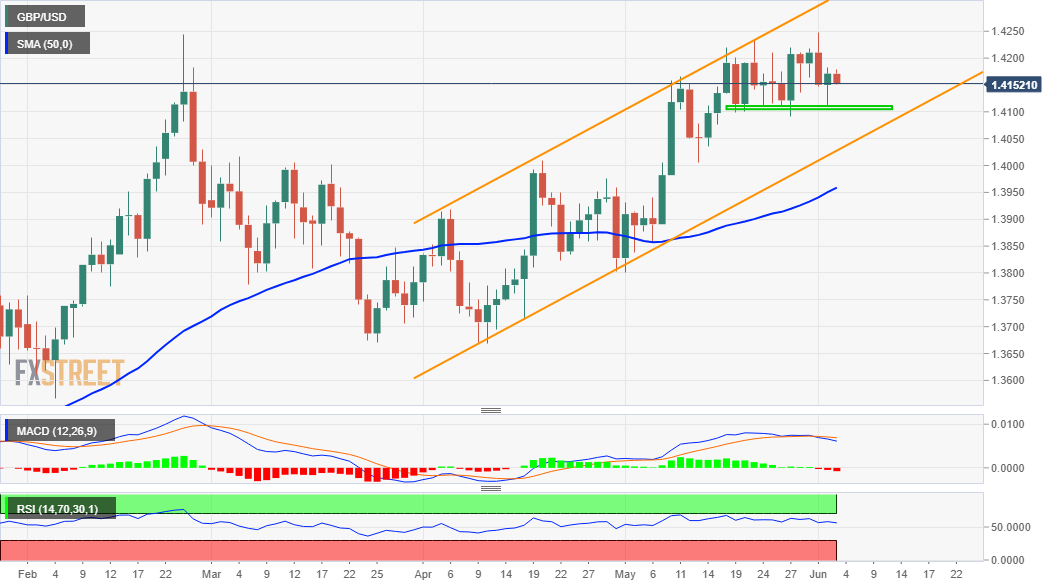