The pound initially gained further ground when news emerged that the UK government and EU had secured a Brexit deal. But in a classic case of “buy the rumour, sell the news,” sterling sold off from its highs quite rapidly. Some market participants undoubtedly booked profit while some looked for opportunistic short trades to take advantage of the overbought prices and amid expectations that the UK parliament will reject the deal on Saturday.

The DUP has already announced it cannot support the new arrangement, while the opposition party’s leader Jeremy Corbyn has called it "an even worse deal than Theresa May’s, which was overwhelmingly rejected." So it remains to be seen whether the new deal will be approved on Saturday, which means there is still a chance for a no-deal Brexit – although the more likely scenario would be for Prime Minister Boris Johnson to request a Brexit deadline extension, which then opens up more uncertainty.

So, there is a possibility that the pound crosses could gap lower at the open on Sunday night in the event that parliament rejects the deal on Saturday. This outcome could also impact risk assets negatively, so the likes of the major indices and yen and gold could all be in focus. The GBP/JPY is therefore one to watch for negative price action in the event the deal fails to pass on Saturday.

Technically, the GBP/JPY has reached potential resistance in the 140.00-141.00 region, so a pullback of some sort should not come as surprise. As well as old support, this area is where we have the 61.8% Fibonacci retracement level coming into play. So far, the pullback from the highs can be thought of as normal retracement in an uptrend. However, price is currently struggling to hold above Wednesday’s high at 140.10, which is potentially a bearish outcome. A close below support and the 200-day average at 138.70 would be bearish as that would create an inverted hammer on the daily. 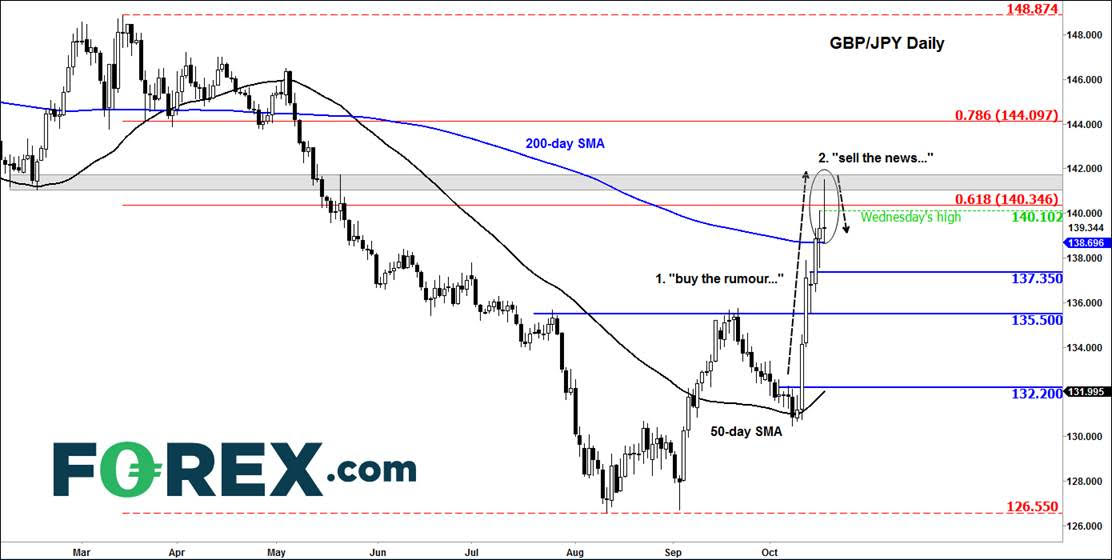