2017 is almost over. What did we learn about gold during this time?

Gold May Prosper in Good Times

First, gold may shine in unpleasant macroeconomic outlook. Generally, gold performs the best during economic slowdown or turmoil. In 2017, the economic conditions were far from recessionary climate. Global economic growth accelerated and became more synchronized among countries. The U.S. economy performed well, the unemployment rate achieved a record low, while inflation remained subdued. The Fed hiked interest rates three times, while the Republicans managed to pass a tax bill. And the U.S. stock market continued its rally, while the cryptocurrencies experienced a parabolic rise at the end of a year. Does it look like a supporting environment for gold? Not really. However, the price of the yellow metal has risen more than 12 percent in 2017, as one can see in the chart below. Perhaps it’s not very impressive, but not bad given the macroeconomic environment. And much better than a savings account or Treasuries. 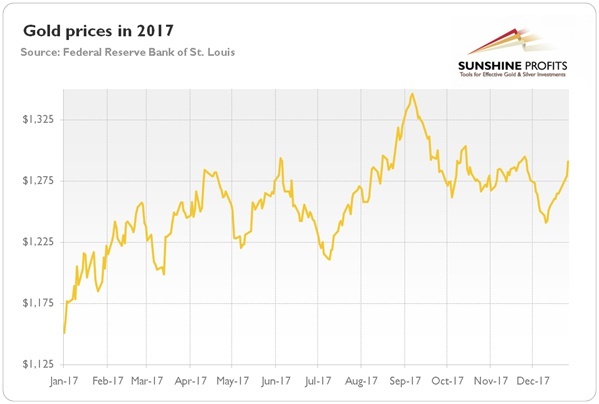 Gold Is Mostly Tied to the U.S. Dollar

The reason why gold gained more than 12 percent in 2017, despite an unpleasant macroeconomic environment for the precious metals, was a weak greenback. The broad trade-weighted U.S. dollar index fell from 128 to 120, or more than 6 percent. Real interest rates are also an important driver of the price of gold, but the correlation was significantly stronger with the greenback in 2017. And the level of yield of the inflation-protected 10-year Treasuries at the end of the year was similar to the level at the beginning of the year (about 0.5 percent). The conclusion is clear: the decline in the U.S. dollar’s value clearly supported the yellow metal over the last twelve months. It is not surprising given the fact that gold is a bet against the greenback. Hence, the key to gold’s future is the U.S. dollar. We will dig into the outlook for the greenback for 2018 in the upcoming edition of the Market Overview.

Gold Is Not a Perfect Hedge against Geopolitical Risks

2017 was perhaps not very politically turbulent, at least compared with 2016, when markets had to deal with the surprising outcomes of the Brexit referendum and the U.S. presidential election. However, the crisis over the Korean Peninsula revived. For many years, North Korea was a small and fusty country, but in 2017 it became a nuclear power able to threaten the U.S. with a hydrogen bomb. The price of gold reacted to the war of words between President Trump and Kim Jong-un. But the incidents related to North Korea failed to trigger anything but a short-term and limited response in the gold market. Investors should always remember this and do not make long-term investments in gold based on geopolitical risks. In other words, although gold may rise after some unexpected conflicts (especially if they threaten the U.S. economy), but long-term trends in the gold market are shaped by fundamental factors, such as the U.S. dollar’s strengthorreal interest rates instead of geopolitical threats.

The volatility of gold has been falling in 2017. As the chart below shows, the CBOE Gold ETF Volatility Index, which measures implied volatility calculated through call and put options, has declined from 16.23 to 10.73 over the year. 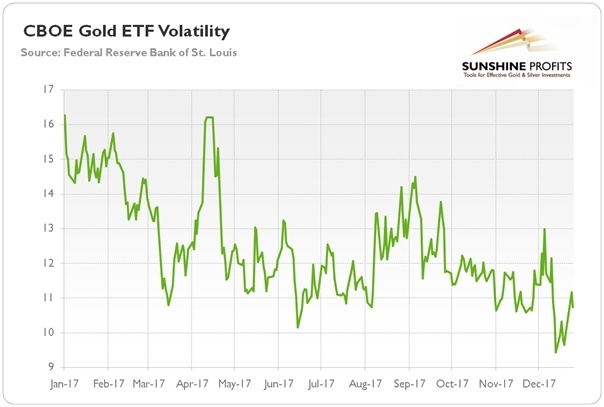 The low volatility in the gold market in 2017 (especially at the end of the year) was not something unusual, but it was a reflection of a general low volatility in the financial markets, partially due to the presence of central banks. Gold prices remained in a narrow trading range, as investors got used to the presidency of Trump and the Fed’s tightening cycle. However, it may be the calm before the storm. The big jump in the price of gold may follow the unusually quiet period in the gold market.

For long-term investors, low volatility is generally positive. However, the sideway trend may be discouraging. This is why we wish you a New Year with a more dynamic gold market and many profitable trading opportunities. Let your wealth shine!