The newest Fed’s statement and dot-plot indicated a much more hawkish tone among the FOMC members than the markets expected, and gold dropped.

On Wednesday (June 16, 2021), the FOMC has published its newest statement on monetary policy . The statement was barely changed. The main alteration is that the Fed has ceased saying that “the pandemic is causing tremendous human and economic hardship across the United States and around the world”. Furthermore, with the CPI annual rate jumping to 5% in May, the US central bank acknowledged that inflation is not any longer “running persistently below this longer-run goal”. Hence, both modifications are slightly hawkish , as the Fed noticed an improvement in the epidemiological situation, as well as higher inflation. Bad news for gold.

However, the statement was only slightly changed, so the investors focused more on the accompanying dot-plot and Powell’s press conference instead. According to the fresh economic projections , the Fed forecasts higher GDP growth and higher inflation this year, as the table below shows. 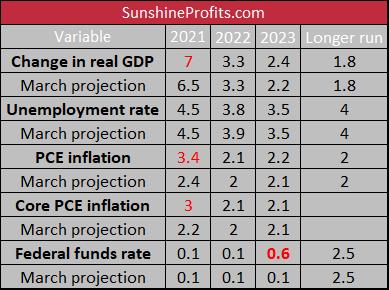 As one can see, the FOMC expects that the GDP will soar 7% in 2021, compared to a 6.5% rise expected in March. They also assume that the pace of economic growth will be slightly higher in 2023. Meanwhile, the Fed officials believe now that the PCE inflation (core PCE) will jump to 3.4% (3%) this year , compared to 2.4% (2.2%) seen in March. They also forecast a slightly lower unemployment rate in 2022.

But the most impactful change occurred in the expected path of the federal funds rate . The FOMC members now forecast that the US policy rate will be 0.6% at the end of 2023, an important upward change from 0.1% projected in March. In other words, the US central bankers believe that two interest rate hikes will be appropriate in 2023 . It means that they started to think about tapering, which is fundamentally negative for gold prices.

Indeed, Powell said during his post-meeting press conference that we can “think of this meeting that we had as the talking about talking about meeting [at which the Fed will start tapering], if you like”.

What does the recent FOMC meeting imply for the gold market? Well, the Fed struck again. As a result, the price of gold plunged. As the chart below shows, the London P.M. Fix slid from about $1,865 on Tuesday to $1779 on Thursday. 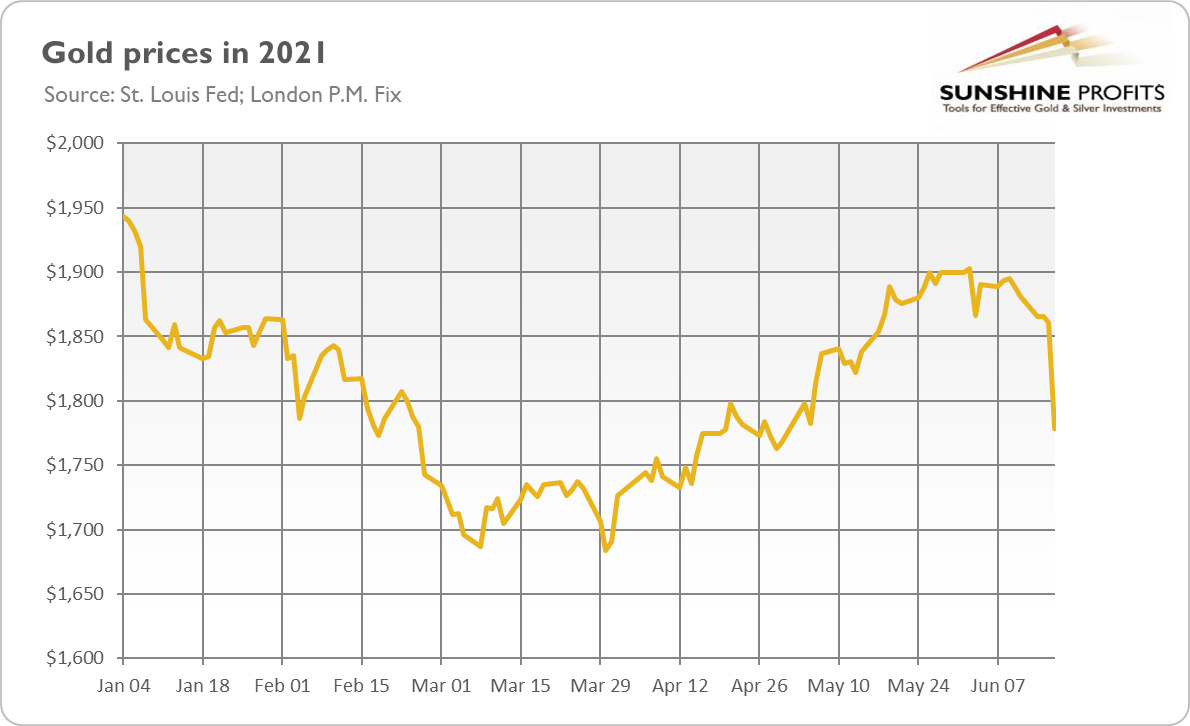 The reason is simple : the fresh dot-plot shows that a majority of the Fed officials currently forecasts two quarter-point rate hikes in 2023 . 13 of 18 FOMC members see some interest rate increases in 2023 compared to just 7 members in March. Moreover, 7 participants now predict some upward moves next year. These changes lifted market expectations of future interest rates . In consequence, the bond yields increased, which raised the opportunity costs of holding non-yielding bullion . Furthermore, the more hawkish stance of the Fed strengthened the US dollar, creating downward pressure on gold prices. In other words, the new economic outlook revealed some hawks among the FOMC members and that there might be less tolerance toward higher inflation than previously thought.

However, the bullish case for gold is not over yet . After all, the Fed maintained its very accommodative monetary policy, and it will not hike interest rates this year and probably not also in 2022. Additionally, the dot-plot is not the official projection of the future path of the federal funds rate, so it should be taken with a grain of salt. A lot may happen by 2023. Also, the Fed leadership seems to be more dovish than many of the regional Fed presidents.

Having said that, the hawkish Fed’s statement and hawkish economic projections are fundamentally negative for the yellow metal in the medium term . The chances of a replay of 2013 have increased. It seems that gold may struggle without an inflationary turmoil, stagflation , the dovish counter-strike at the Fed, or a debt crisis .