EURUSD has drifted down to a fresh four-day low at 1.0886, driven lower by a broad haven-bid for Dollars as Hong Kong re-emerges as a flash point in US-China, and West-China, relations. The narrow trade-weighted USDIndex (DXY) rose to a three-day high at 99.62, extending the rebound from the 18-day low seen on Wednesday at 99.01. EURUSD continues to trade in a broad consolidation range near the halfway mark of the volatile range that was seen during the height of the global market panic in March, which was marked by 1.0637 on the downside and 1.1494 on the upside. Expectations are for the pair to lack sustained directional bias for now, though political tensions among Eurozone members, coupled with the dollar’s role as a haven, suggest the risks are to the downside, as demonstrated in the H1 chart. Below we can see that there was a rejection of 1.1000 yesterday (1) and a retrace of the initial fall to the 50-hour moving average (2), followed by the sell-off during the Asian and European sessions today (3).

There is little divergence in central bank policy currently, with both the ECB and the Fed pursuing aggressively accommodative policy, with both Europe and the US facing significant economic headwinds from virus-containing lockdown measures. Both are amid the early stages of reopening from lockdowns. 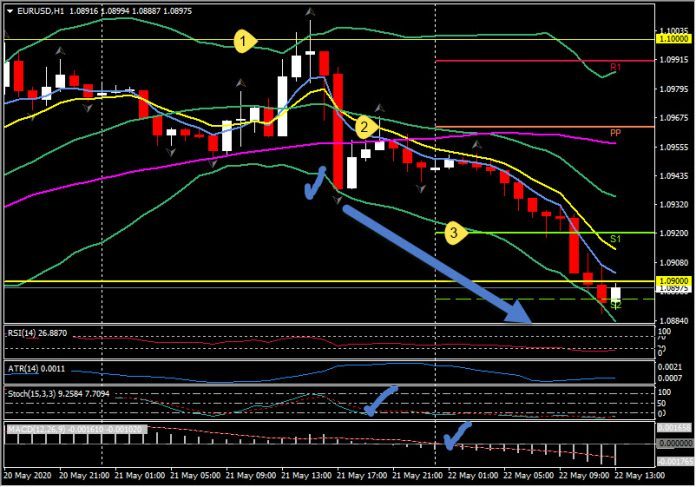