ECB policymakers will ask Lagarde to be tough on fragmentation

Widening spreads have the ECB alarmed. The Bloomberg article ECB Policymakers Will Ask Lagarde to Be Tough on Fragmentation is what inspired this post.

European Central Bank policymakers will this week ask President Christine Lagarde to use stronger language to signal that fragmentation won’t be allowed to happen and the borrowing costs of more vulnerable countries like Italy and Spain will be contained, according to people familiar with the matter.

Lagarde has said many times the central bank won’t allow financial conditions across the euro area to diverge significantly and is ready to do whatever is needed to avoid it. 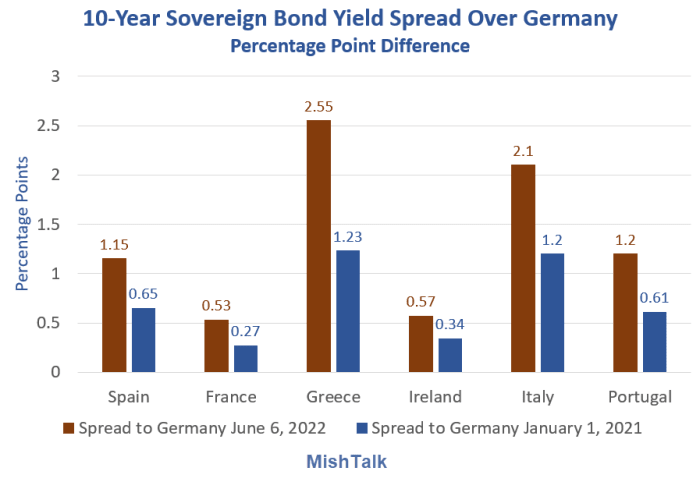 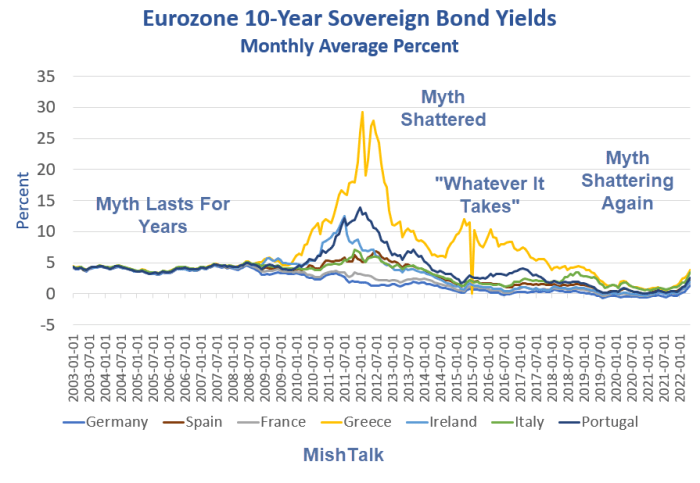 In 2015, when Greece 10-year bonds exploded to nearly 30 percent, then ECB president Mario Draghi (now Italy's Prime Minister) gave a speech announcing "We will do whatever it takes to save the Euro, and believe me it will be enough."

After the announcement yield spreads plunged.

Q: What did Draghi do?
A: Nothing!

Seriously, the ECB did nothing. The threat alone was somehow sufficient. Draghi restored faith in peripheral debt.

Lagarde has said many times the central bank won’t allow financial conditions across the euro area to diverge significantly and is ready to do whatever is needed to avoid it.

The Eurozone gets another test doesn't it?

The Euro itself is fundamentally flawed.

There is no one interest rate policy that makes sense for Greece, Spain, Italy, and Germany.

The sovereign debt risk is not the same and anyone with an ounce of common sense understands that.

To control spreads this time, I suspect the ECB will have to buy every bond of Greece, Spain, Italy, and Portugal.

That is not compatible with Quantitative Tightening or rising yields.

For the second time ECB presidents have to come to the rescue of Greece, Spain, Italy, and Portugal.

I am positive that another "We will do whatever it takes" announcement without doing anything will NOT suffice.

Controlling spreads is going to be damn hard to pull off with the ECB's interest rate at -0.50 percent and rising and quantitative tightening allegedly in the works.

Another Eurozone sovereign debt crisis is brewing and few see it.

Meanwhile, back in the USA, my June 3 "Hoot of the Day" was Biden Plans to Pay Down National Debt, Tackle Inflation

The bull market in bonds is over, and with that Danielle DiMartino Booth see a “Global Depression” Threat.

EUR/USD turns south towards 1.0150 ahead of EU GDP, Fed minutes

EUR/USD has come under renewed selling pressure below 1.0200 amid broad risk-aversion. The US dollar rebounds ahead of Fed minutes while the euro awaits Eurozone GDP. The shared currency remains weighed down by recession fears and gas crises.

GBP/USD drops below 1.2100 amid risk-aversion

GBP/USD is falling below 1.2100 in the European session on Wednesday as investors assess the implications of surging UK inflation on the BOE's next policy move. The US dollar finds demand amid souring risk sentiment ahead of US data and Fed minutes.