European stocks bounced back on Tuesday as the volatility in the market continued. In Germany, the DAX index rose by over 0.77% while in France, the CAC 40 index rose by 1%. The rebound happened after the relatively strong German business confidence data. According to the info Institute, confidence rose for the first time in seven months, reflecting an easing of the supply chain bottlenecks. It rose from 95.7 in January from the previous 94.8. Some of the top moving stocks in Europe were Credit Suisse, Royal Mail and Unilever. Credit Suisse and Royal Mail delivered weak results while Unilever announced that it will slash 1,500 jobs.

The Australian dollar tilted lower after the strong Australian consumer price index (CPI) data. The numbers showed that the country’s inflation rose from 0.8% in the second quarter to 1.35 in the fourth quarter. This increase led to an annualized gain of 3.55, which is the highest it has been in years. The trimmed and weighted mean CPIs increased to 2.6% and 2.7%, respectively. These numbers mean that the Reserve Bank of Australia (RBA) will turn hawkish when it meets in February. Analysts expect the bank will start hiking rates in the third quarter of the year.

Cryptocurrency prices attempted to rebound today after going through a tough period in the past few days. According to CoinGecko, Bitcoin has jumped by 8% in the past 24 hours while Ethereum and Binance Coin has risen by over 5% in the same period. The comeback is likely because of the strong performance of European equities and the buying-the-dip mentality. Some analysts believe that cryptocurrencies have moved to the oversold zone. The next key catalyst for Bitcoin and other cryptocurrencies will be the US consumer confidence data and the Federal Reserve decision.

The EURUSD pair has been in a strong bearish trend in the past few days. The pair declined to a low of 1.1280, which was the lowest level since 5th January. The pair is significantly lower than the ascending trendline shown in yellow. It has also moved below the 25-day moving average and the neckline of the head and shoulders pattern. Therefore, the pair will likely keep falling ahead of the Fed decision. 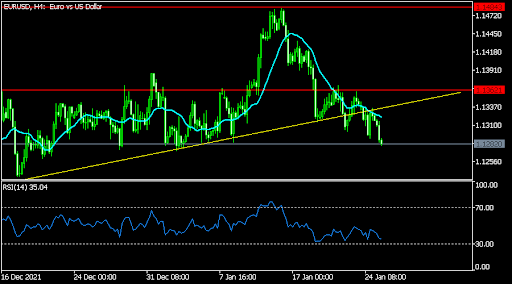 The GBPUSD pair remained under pressure today. It is trading at 1.3475, which is slightly above the key support level at 1.3440. It has formed a small bearish flag pattern and the pair is slightly above the 50% Fibonacci retracement level. It has also moved below the 25-day moving average while the Relative Strength Index (RSI) has been falling. Therefore, the pair will likely keep falling as bears target the next key support at 1.3450. 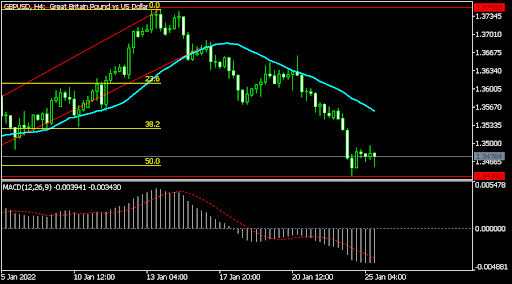 The ETHUSD pair stabilized today after falling sharply in the past few days. The pair is trading at 2,433, which is higher than this week’s low of 2,151. On the daily chart, the pair is still below the 25-day and 50-day moving averages. It has also moved below the 61.8% Fibonacci retracement level. Therefore, the pair will likely resume the bullish trend, with the next key support at 2,100. 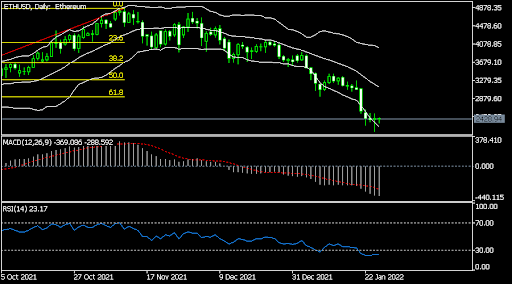