The EUR/USD pair started the week under strong bearish pressure and slumped to its weakest level since July 2020 at 1.1263 on Wednesday as the greenback continued to gather strength on inflation fears. The pair then managed to stage a rebound and climbed toward 1.1400 on Thursday as the 10-year US Treasury bond yield began turning south in the second half of the week. Nevertheless, European Central Bank (ECB) President Christine Lagarde’s remarks on the policy outlook ahead of the weekend forced the pair to lose its traction. With Austria announcing a nationwide lockdown due to the rising number of coronavirus cases on Friday, EUR/USD renewed 2021-lows below 1.1300 before steadying near that level. For the week, the pair lost more than 1% for the second straight time.

While testifying before the Economic and Monetary Affairs Committee of the European Parliament on Monday, Lagarde reiterated that conditions for a rate hike were “very unlikely” to be met in 2022. In the absence of high-tier macroeconomic data releases, Lagarde’s dovish comments weighed on the shared currency.

On Tuesday, the data from the US revealed that the Import Price Index rose by 10.7% on a yearly basis in October. Additionally, Retail Sales increased by 1.7% on a monthly basis in the same period, surpassing market expectations of 1.4%. Boosted by these readings, the 10-year US T-bond yield climbed to its highest level since late October and allowed the dollar to continue to outperform its rivals.

The unabated USD strength caused EUR/USD to extend its slide to a fresh 16-month low during the Asian session on Wednesday. Eurostat reported that the annual Consumer Price Index (CPI) in the euro area stood at 4.1% in October. Investors largely ignored this print as it matched the flash estimate and the market consensus. In the second half of the day, the 10-year US T-bond yield fell below 1.6% and triggered a modest rebound in EUR/USD.

Meanwhile, ECB Governing Council Member Isabel Schnabel said that the ECB's decision to continue to buy bonds was a sign that a rate hike was not imminent. Schnabel further added that the rise in inflation was a welcome development.

Finally, Lagarde crossed the wires again on Friday and argued that it wouldn’t make sense to tighten the policy prematurely when inflation pressures are expected to fade. “Tighter policy would only exacerbate the contractionary effect on the economy,” Lagarde said.

On a concerning note, Austria announced that it will impose a nationwide lockdown that will last at least ten days starting Monday. Moreover, German Health Minister Jens Spahn said controls are needed in Germany to stop the increase in confirmed coronavirus cases. When asked about the possibility of a full lockdown, Spahn said they were in a situation where they can’t rule anything out. Money markets, who were pricing a 20 basis points ECB rate hike by the end of 2022, are now not sure whether the ECB can afford to tighten its policy.

On Tuesday, IHS Markit will release the preliminary Manufacturing and Services PMI surveys for the euro area and Germany. If the data reveal that the economic recovery in the eurozone remains healthy, investors could continue to price in an ECB rate hike in 2022 which would help the common currency find demand. On the other hand, soft prints could weigh on the euro.

On Wednesday, several high-impact data releases will be featured in the US economic docket, including October Durable Goods Orders, third-quarter GDP (second estimate) and the Personal Consumption Expenditures (PCE) Price Index. Market participants will pay close attention to the PCE Price Index data, the Federal Reserve’s preferred gauge of inflation. Earlier in the month, the stronger-than-expected CPI print triggered a rally in US T-bond yields and the US Dollar Index. A similar market reaction could be seen if the annual core PCE figure continues to rise.

On Thursday, the Account of the ECB’s Monetary Policy Meeting is not expected to offer any fresh insights into the policy outlook. Third-quarter Gross Domestic Product data from Germany will be looked upon for fresh impetus as well.

The market action is likely to remain subdued for the rest of the week due to the Thanksgiving holiday in the US.

In short, EUR/USD is unlikely to stage a decisive recovery in the near term with the policy divergence between the ECB and the Fed favouring the dollar over the common currency. Even if the pair were to show some signs of life on upbeat European data, it wouldn’t be surprising to see sellers defending key technical levels. 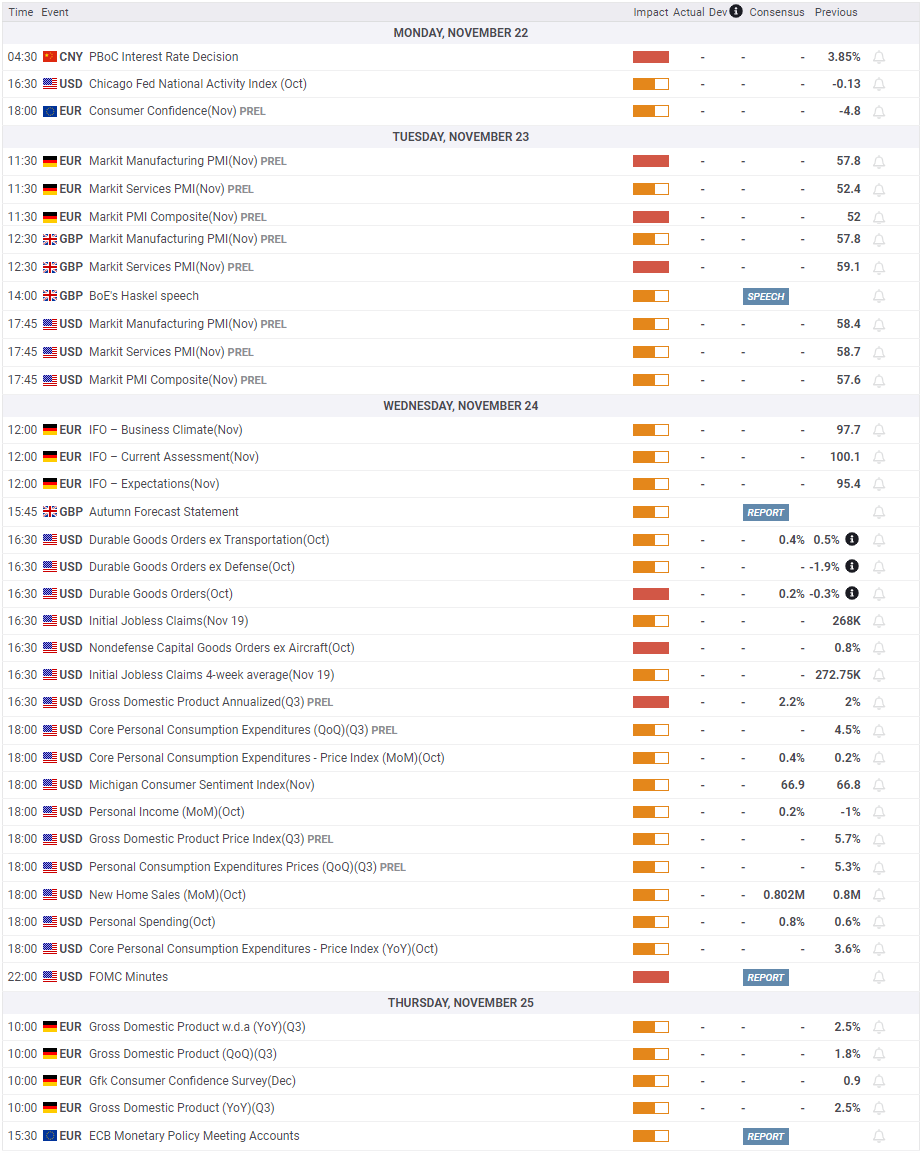 On the daily chart, the Relative Strength Index (RSI) indicator returned to 30 following the technical rebound witnessed on Thursday, showing oversold conditions. In case the pair stages another rebound, it is likely to encounter resistance as 1.1370 (static level), 1.1450 (psychological level) and 1.1500 (20-day SMA). Unless buyers manage to flip 1.1500 into a support, the pair's near-term bearish bias will remain intact.

The FXStreet Forecast Poll suggests that EUR/USD is likely to stay in a consolidation phase above 1.1300. Surprisingly, the one-month view remains strongly bullish with an average target of 1.1514. 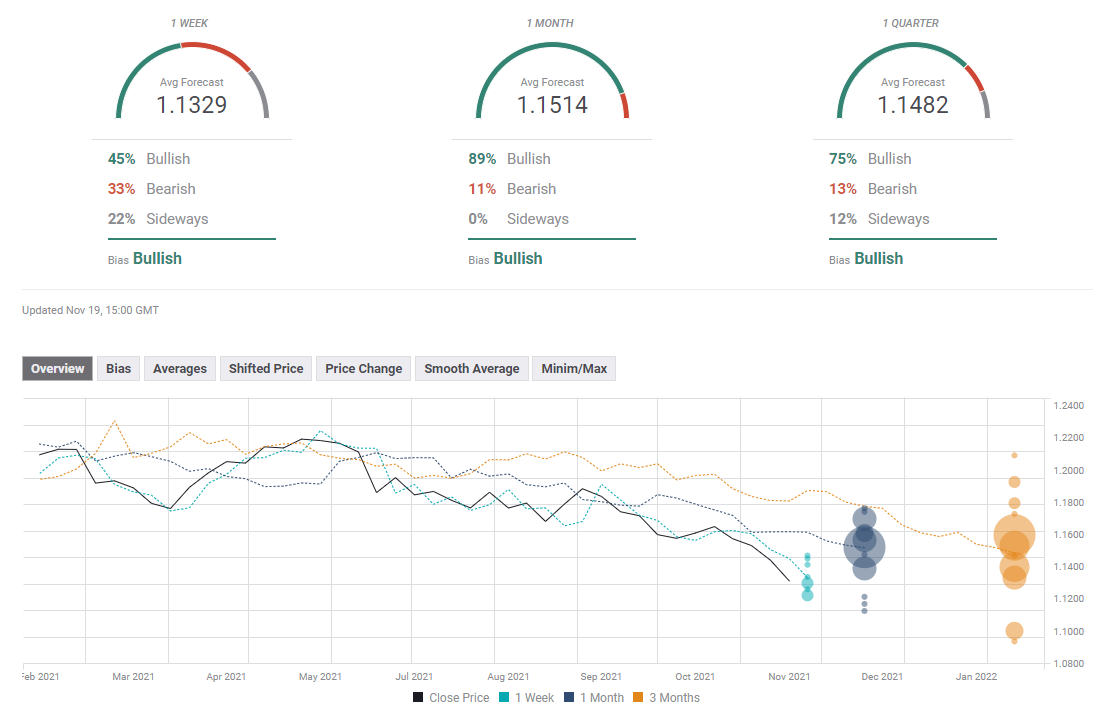