The EUR/USD pair rallied sharply on Monday morning, only to erase all of the gains during the US session, and it closed in negative territory, likely undermined by the mess in China.

After that, the dollar saw a widespread dip that didn't seem to be caused by any particular news, leading to a significant comeback of EUR/USD on Tuesday morning. Some observers attributed the improvement in sentiment to the optimism that the turbulence in China will ultimately result in the expected relaxation of the nation's zero-COVID policy.

Therefore, the euro-dollar pair traded half a percent higher during Tuesday's London session, changing hands near 1.04.

According to information released on Tuesday by the European Commission, the Economic Sentiment Indicator (ESI) for the Euro area increased from 92.7 in October to 93.7 in November. This result was just higher than the 93.5 market forecast. The ESI increased for the EU by 1 point to 92.2.

Further information on the report showed that the Euro Area's Industrial Confidence fell to -2 from -1.2, and the Services Confidence increased a little to 2.3 from 2.1.

Moreover, in November, consumer inflation in Spain increased by 6.8% compared to a year earlier, less than the 7.3% increase in October.

Furthermore, the federal state of North Rhine-Westphalia, the most populous state in Germany, revealed that consumer prices decreased 0.8% on the month, a far more significant decrease than the 0.2% experts had predicted and a striking turnaround from October's 1.2% gain.

This strengthens predictions for a more significant slowdown in European prices before Wednesday's preliminary measurement of inflation in the Eurozone for November.

The Eurozone's inflation rate is projected to be 10.4% in November, a slight decrease from the 10.6% recorded in October, although these figures indicate a more significant decline may be possible.

"The question is whether inflation will fall back from the highs reached (not far from 11% year-on-year) and allow the European Central Bank to ease its hawkish rhetoric a bit," analysts at ING said.

As a result, they expect the EUR/USD pair to fall back toward the 1.02 area in the second half of the week.

In addition, data from the September Housing Price Index and the Conference Board's Consumer Confidence Index will be part of the US economic calendar later today.

Technically speaking, the pair is having trouble staying above the key resistance of the 200-day moving average, currently near 1.038. The next target for bulls will be at this week’s highs near 1.0480.

On the downside, the support is seen at the previous week’s lows at around 1.0230. Until the pair decides and posts a break of those two levels, we might see price action sideways. 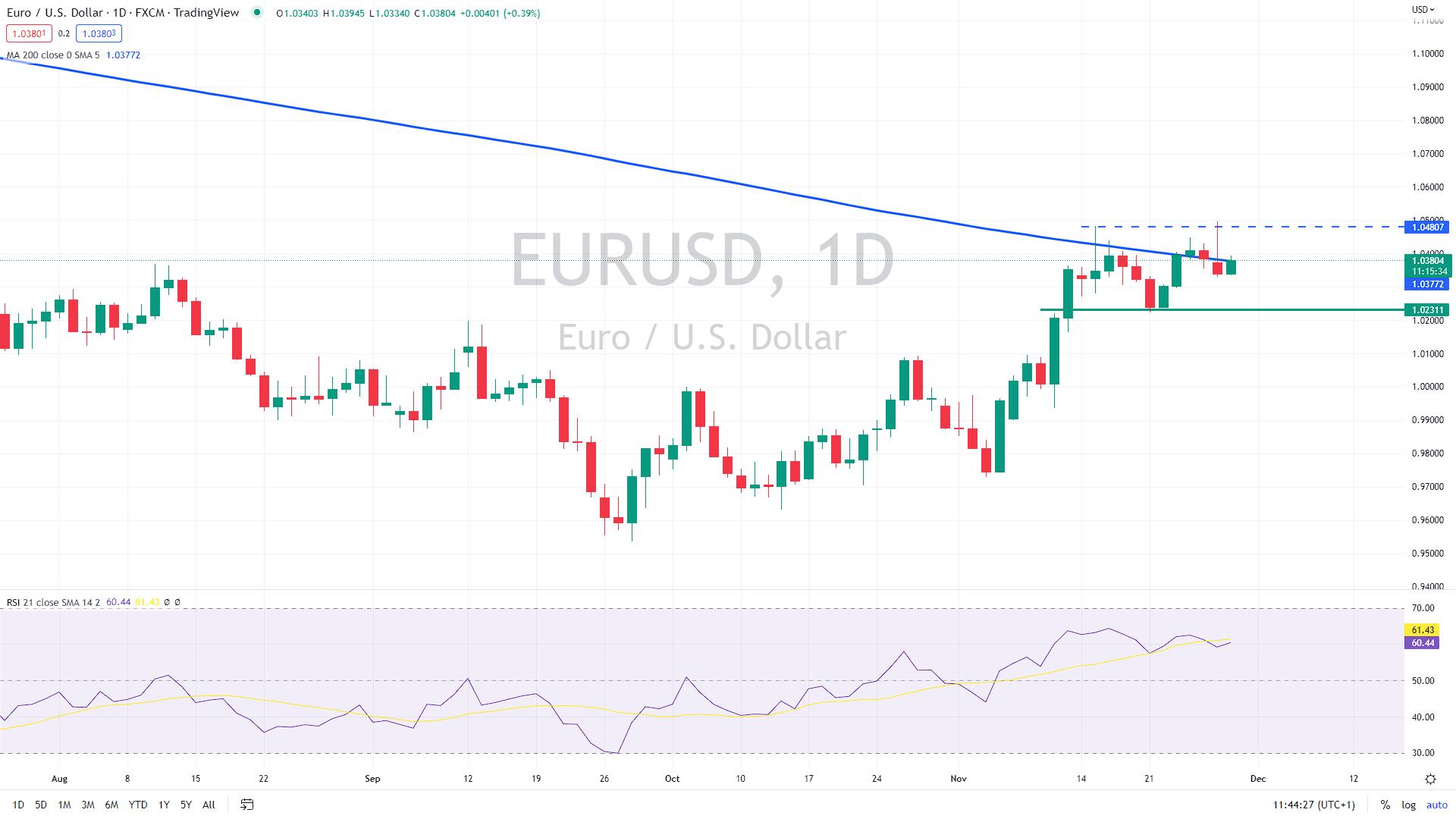 The Bank of England (BoE) raised its policy rate by 50 bps to 4% as expected and noted that it could further tighten the policy if needed, helping GBP/USD rebound modestly. Eyes on Governor Bailey's press conference and the European Central Bank's (ECB) policy announcements.

EUR/USD is trading in a narrow channel at around 1.1000, as buyers stay on the sidelines ahead of the ECB policy decision. The pair is sitting close to the highest level in 10 months, as the US Dollar licks the dovish Fed decision-inflicted wounds.