No taper – and therefore no tantrum in markets, but a positive mood that has been weighing on the safe-haven dollar and sending EUR/USD to 1.2150, the highest since late February. Traders have no time to rest before the next top-tier US event.

The Federal Reserve left its interest rate unchanged as expected in its April decision, and stressed that any pickup in inflation is transitory even though acknowledging the economic improvement. Reducing the pace of buying bonds from the current $120 billion/month was not even on the agenda – and that means further dollar devaluation.

Powell Analysis: The five dovish comments that down the dollar for longer

Jerome Powell, Chairman of the Federal Reserve, stressed that millions of Americans are out of work and that inflation is due to base effects and bottlenecks, which will likely be resolved. He also said the economy has a "long way to go." Did he receive Thursday's Gross Domestic Product figures in advance?

The economic calendar is pointing to a considerable annualized increase of 6.5% in US GDP in the first quarter of 2021. The year began with a harsh upswing of COVID-19, continued with a "deep freeze" storm but then turned around.

While there is a chance for GDP to fall short of investors' expectations, the euro is well-positioned to take advantage of a minor miss in US data and may weather upbeat figures. The old continent's vaccination campaign has picked up markedly and infections are falling. German and Spanish inflation figures are unlikely to ruin the rally, at least for now.

President Joe Biden presented another tax and spend plan worth $1.8 trillion – even before Congress passed his proposed $2.25 trillion program focused on infrastructure. Markets have shrugged off the news, as any grand schemes would have a hard time mustering a majority on Capitol Hill.

All in all, the broader trend is to the upside, but a short-lived correction cannot be ruled out. 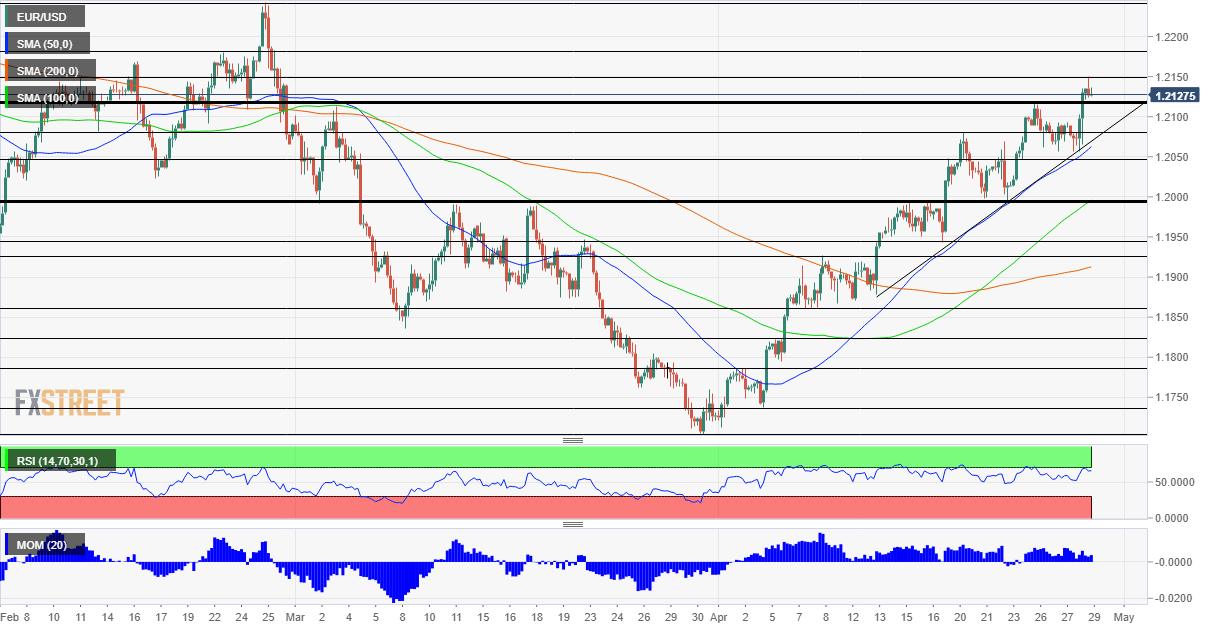 Euro/dollar is trending higher since bottoming out early in April. It has recently been trading above an uptrend support line that follows the 50 Simple Moving Average. Momentum remains to the upside and the Relative Strength Index (RSI) is below 70 – thus outside overbought conditions.

Overall, bulls are in the driver's seat.