The EUR/USD pair had a good two-way move on Tuesday and was primarily influenced by the US Dollar price dynamics. The greenback started the day on a strong note, albeit started losing ground during the US trading session on the back of a sharp fall in the US Treasury bond yields. The pair witnessed a sudden turnaround and built on slightly better than expected German ZEW economic sentiment-led attempted bounce from an intraday low level of 1.1276.

The USD selling remained unabated, rather seemed unaffected by Cleveland Fed President Loretta Mester's comments, saying that the Fed may need to raise interest rates in 2019 but could still end its efforts to trim its massive balance sheet before the end of the year. The pair surged over 80-pips intraday to hit 1-1/2 week tops, though growing market concerns about the health of Euro-zone economy kept a lid on any runaway rally.

The pair now seems to have entered a bullish consolidation phase and was seen oscillating in a narrow trading band through the Asian session on Wednesday. In absence of any major market moving economic releases, either from the Euro-zone or the US, the key focus will be on the release of the latest FOMC meeting minutes. After a dovish assessment of the latest FOMC statement, the minutes will be looked upon for fresh insight over the central bank's monetary policy outlook. The Fed's anticipated rate hike path for 2019 would influence the near-term USD price dynamics and eventually provide a fresh directional impetus to the major.

Meanwhile, looking at the recent price action, the pair has repeatedly failed to capitalize on its attempted recovery moves and the technical picture remains biased in favour of bearish traders. Hence, any subsequent up-move seems more likely to remain capped at 50-day SMA, around the 1.1385 region, which if cleared decisively might trigger a short-covering bounce towards retesting near five-month-old descending trend-line hurdle, currently near the 1.1470 region.

On the flip side, the 1.1310-1.1300 region now becomes immediate strong support to defend, which if broken could accelerate the fall further towards the 1.1260-55 horizontal support. A follow-through selling will reinforce the bearish outlook and drag the pair back towards multi-month lows, around the 1.1215 region. The downward trajectory could further get extended, even below the 1.1200 handle, towards testing its next major support near mid-1.1100s. 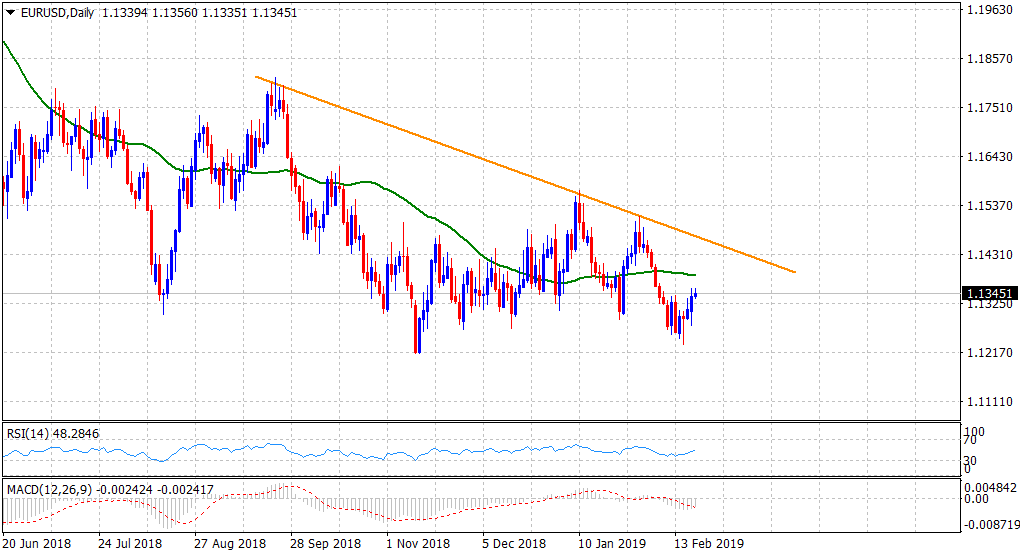