Black Friday is here and the euro may seem like a bargain – if it were not for Germany's coronavirus situation. Europe's largest economy recorded its one-millionth COVID-19 case, active infections remain high and the curve is not bending lower. Chancellor Angela Merkel and regional leaders agreed to extend the lockdown through December 20 and easing could have to wait for after Christmas.

While France and Spain suffered worse second waves, their polities have successfully bent down the curve and are reopening. Overall, covid cases are falling in the EU while they continue rising in the US. 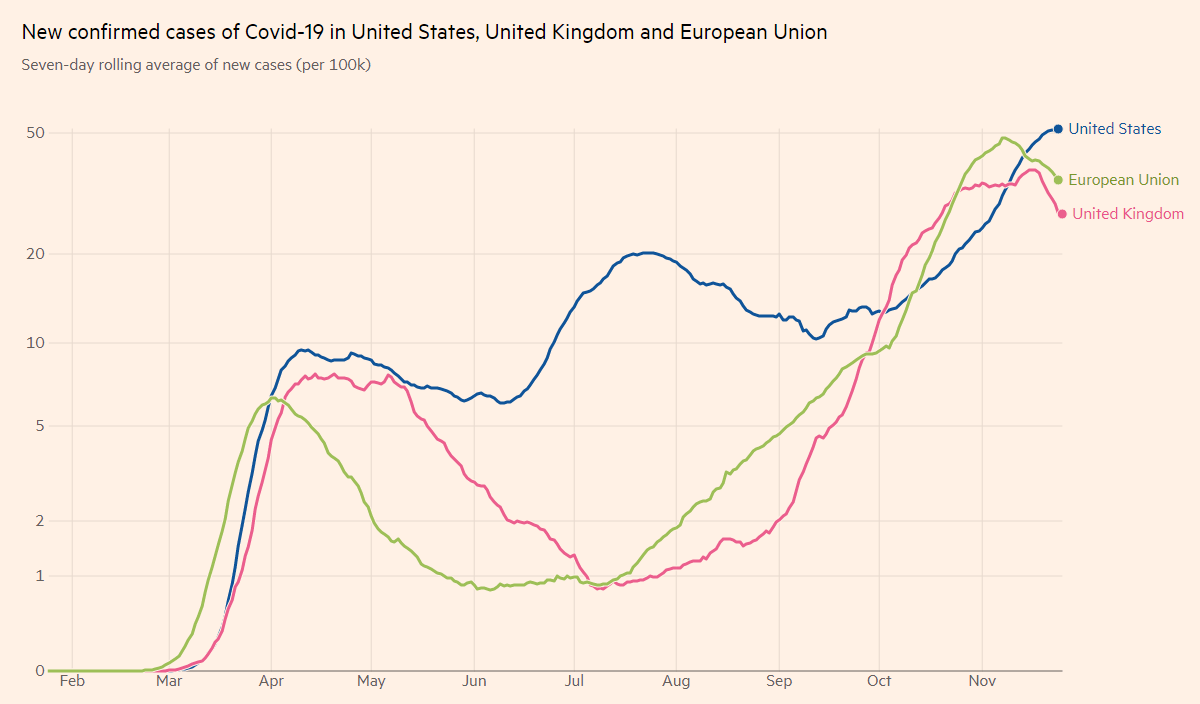 Americans have been gobbling turkeys for Thanksgiving amid a rapid spread of the disease, with yet another record in hospitalizations, above 90,000 as of Thursday. However, markets are encouraged by President Donald Trump's comments that he will leave the White House if President-elect Joe Biden wins the Electoral College.

Trump continued floating unsubstantiated claims of fraud, accusations that courts have been dismissing. Biden is set to present his economic team next week, with former Fed Chair Janet Yellen designated as Treasury Secretary.

Investors remain hopeful that vaccines will be approved soon, shrugging off confusion about the AstraZeneca/University of Oxford figures. The project reported an efficacy rate of 90% under a lower dose regimen, yet this encouraging news was later mired by an admission that this variant of the Phase 3 trial was made by accident. Moreover, it was given only to people under 55 years old.

While more data is awaited from AstraZeneca, regulators in the UK are likely to push through with approving the immunization scheme. In the US, the Pfizer/BioNTech effort awaits authorization.

Overall, markets are cautiously optimistic and this atmosphere favors gains for EUR/USD. On the other hand, Germany's virus situation is curbing the euro's gains.

The economic calendar is nearly empty, leaving room for covid and political headlines to rock markets on Black Friday.

Euro/dollar continues benefiting from upside momentum on the four-hour chart and the Relative Strength Index is below 70 – outside overbought conditions. The world's most popular currency pair is also holding up above the 50, 100 and 200 Simple Moving Averages.

Bulls remain in full control amid the upward movement.

More Markets return to normal, and traders may be loving it