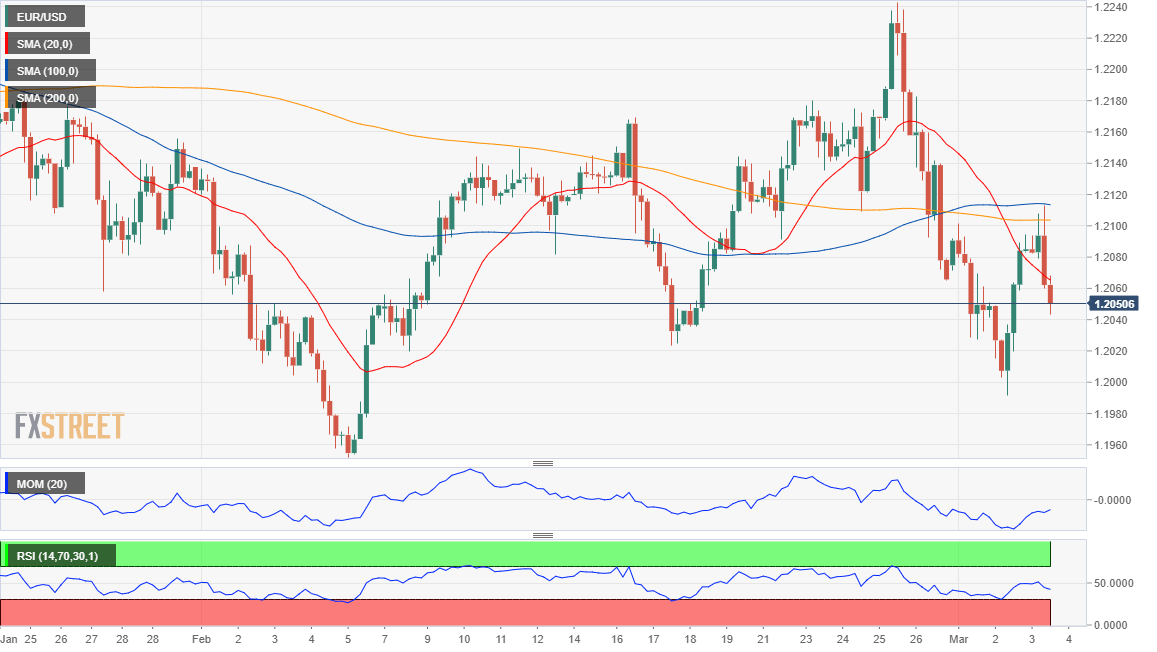 The EUR/USD pair reached 1.2112 but is quickly retreating ahead of the US opening, with the dollar once again founding demand amid higher government bond yields. The pair hit the mentioned daily high after news made the rounds, indicating that the ECB reportedly said that they see no need for drastic action to combat rising bond yields. The same headline boosted US Treasury yields to fresh weekly highs, with that on the 10-year note at fresh weekly highs around 1.47%.

Markit published the February final Services PMIs for the euro area, which showed that output in the sector remained in contraction territory, declining for the sixth consecutive month. The German index was downwardly revised to 45.7, although the final EU figure printed at 45.7, slightly better than previously estimated.

The US has just published the ADP survey on private jobs creation. The report showed that 117K positions were added in February, below the expected 177K. January reading was upwardly revised to 195K from 174K. Markit will also publish the US Services PMI, foreseen at 58.9, while the country will release the official ISM services index, expected at 58.7.

The EUR/USD pair trades in the 1.2050 price zone, poised to extend its decline. The 4-hour chart shows that it met sellers around its 100 and 200 SMA, now back below a bearish 20 SMA. Technical indicators turned south and are back within negative levels indicating increased bearish interest. Further declines are to be expected on a break below 1.2015, the immediate support.

EUR/USD advances toward 1.20 amid an improving market mood

EUR/USD is rising toward 1.20, paring its losses as falling returns on US Treasuries push the dollar lower. Optimism about vaccines and a stronger global economy weigh on the greenback as well. US Building Permits, Housing Starts and Consumer Confidence are eyed.

GBP/USD rises toward 1.38 as the dollar weakens with yields

GBP/USD is trading closer to 1.38, recovering from the lows as falling US Treasury yields are dragging the dollar down ahead of several data releases. Sterling continues benefiting from Britain's vaccination campaign.

Gold has been trending higher after taking support near the double bottom formation on the daily chart. However, XAU/USD now faces stiff resistance near the $1,775 hurdle. MACD indicator tilts in favor of bulls.