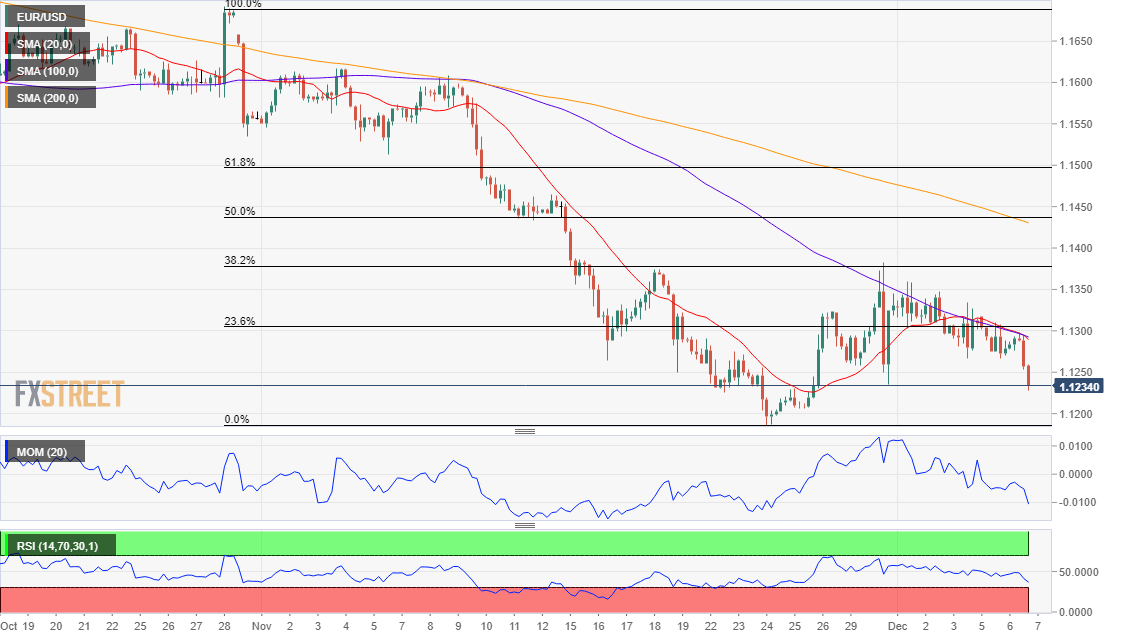 The EUR/USD pair trades at fresh weekly lows in the 1.1230 price zone, as the greenback firmly advances against its European rivals, as yields pressure their weekly highs while global stocks maintain their positive momentum. Commodity-linked currencies, on the other hand, are firmly up against the dollar, following the lead of equities while also supported by soaring oil prices.

The Union had a busy macroeconomic calendar, which anyway had a limited impact on prices. Generally speaking, data failed to impress, as the EU Q3 Gross Domestic Product was confirmed at 2.2% QoQ, while German Industrial Production contracted 0.6% YoY, much worse than the 8.8% advance expected. Additionally, the German ZEW Survey on Economic Sentiment improved to 29.9 in December and to 26.8 for the EU, although the assessment of the current situation plummeted to -7.4 vs the 5 anticipated by markets.

Meanwhile, the US published the October Trade Balance, which posted a deficit of $83.2 billion. Also, Q3 Nonfarm Productivity resulted at -5.2%, while Unit Labor Costs for the same period improved to 9.6%.

From a technical point of view, the EUR/USD pair is poised to accelerate its slump. The daily chart shows that sellers rejected advances near a firmly bearish 20 SMA for a sixth consecutive day, while, in the mentioned time frame, technical indicators resumed their declines within negative levels.

In the near term, and according to the 4-hour chart, the bearish case is even clearer, as technical indicators head south almost vertically below their midlines, reflecting strong selling interest. Additionally, the 20 and 100 SMAs maintain their bearish slopes, converging at around 1.1300. The pair is poised to test the 1.1200 level, while a break below it exposes the 1.1160 price zone, where the pair bottomed on June 2020.

NFTs exploded in popularity in 2021, driving Meta to offer users the feature to create, display and sell digital collectibles and art on its social media platforms. Meta is developing the feature to enable the multi-billion userbase to delve into NFTs.