EUR/USD is showing little movement on Friday, continuing the lack of activity seen on Thursday. Currently, the pair is trading at 1.1280, up 0.03% on the day. On the release front, there are no major German or eurozone events. The German Wholesale Price Index slowed to 0.3% in May, down from 0.6% a month earlier. In France CPI dropped to 0.1%, its lowest level in three months. In the U.S., the key events are the May retail sales reports. Core retail sales are projected to climb to 0.5%, after a weak gain of 0.1% a month earlier. Retail sales are expected to rebound to 0.7%, after a reading of -0.2% in April. The week winds up with the UoM Consumer Sentiment report, which is expected to fall to 98.1, after an outstanding reading of 102.4 in the previous release.

The slowdown in eurozone is alive and well, as underlined by weak eurozone numbers on Thursday. German CPI gained just 0.2% in May, compared to April. With the eurozone’s locomotive showing weak inflation, the ECB is not under any pressure to raise interest rates anytime soon. In March, the ECB changed its forward guidance on rates, saying that it expected rates to remain unchanged throughout 2019. Previously, the bank had said it would not alter rates prior to the summer of 2019. Manufacturing remains depressed, as eurozone industrial production declined 0.5%, marking a third straight decline. The escalation in global trade tensions, particularly between the U.S. and China, have reduced the demand for German and eurozone exports and dampened manufacturing activity.

Consumer inflation numbers for May were soft, but the markets are counting on better news from consumer spending data. Retail sales and core retail sales are expected to rebound in May, and these numbers could play a crucial role in the Federal Reserve’s forward guidance for rates. The markets are prepared for a rate cut, possibly two, in the second half of the year. The CME Group has set the odds of a July cut at 62% and another cut in September at 55%. Lower interest rates make the U.S. dollar less attractive to investors, so some headwinds could be ahead for the greenback. 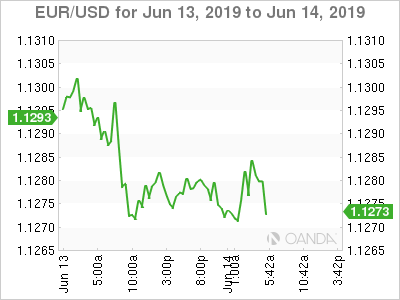