The EUR/USD pair found a decent support near mid-1.1900s, or over two-month lows and staged a solid bounce on the last trading day of the week. The uptick was exclusively sponsored by the emergence of fresh selling around the US dollar, which lost some additional ground following the release of mixed US monthly jobs report. The unemployment rate unexpectedly dropped to 6.3% from 6.7% previous but was largely offset by a rather unimpressive headline NFP print. The US economy added only 49K jobs in January and the previous month's reading was also revised down to show a loss of 227K jobs as against 140K reported earlier.

The data forced investors to scale back bets on any further rebound in the greenback, though strengthened the case for more fiscal support. Bets for a massive US stimulus package increased further after the US Senate approved a budget resolution on Friday to fast track the President Joe Biden's proposed $1.9 trillion coronavirus relief plan to be approved without Republican support. Expectations for a larger government borrowing pushed the yield on the benchmark 10-year US government bond to the highest level in nearly one year on Monday. This, in turn, extended some support to the USD and capped gains for the major.

That said, the underlying bullish sentiment in the financial markets undermined the safe-haven USD and helped limit any meaningful downside for the major. The pair was seen trading below mid-1.2000s through the Asian session as market participants now look forward to the release of German Industrial Production figures for some impetus. Meanwhile, there isn't any major market-moving economic data due for release from the US. Hence, the US stimulus headlines and the US bond yields, along with the broader market risk sentiment will influence the USD price dynamics and produce some meaningful trading opportunities.

From a technical perspective, the attempted recovery struggled to lift the pair further beyond a previous strong support breakpoint, now turned resistance, near the 1.2055-60 region. This should act as a key pivotal point for short-term traders. A sustained move beyond might prompt some short-covering move and assist the pair to aim back to reclaim the 1.2100 round-figure mark. The momentum could further get extended towards the 1.2135-40 supply zone, which if cleared decisively will negate any near-term bearish bias.

On the flip side, the key 1.2000 psychological mark now seems to protect the immediate downside. Any subsequent fall might continue to find decent support near the 1.1950 area. Some follow-through selling will reaffirm the near-term negative bias and turn the pair vulnerable to break below the 1.1900 mark, towards testing the next major support near the 1.1860-55 region. 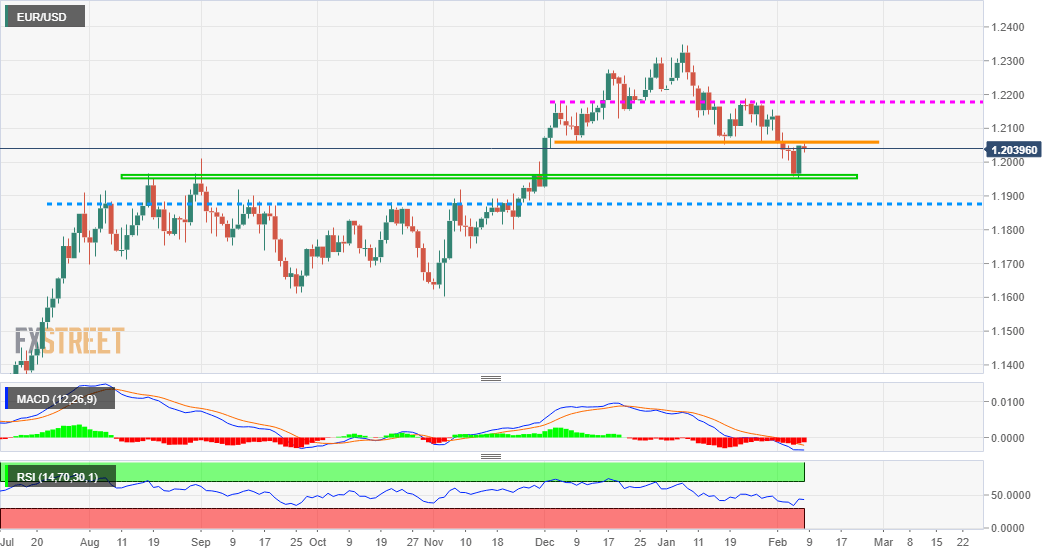