The substantial rise in energy costs being seen in European economies undeniably represents a headwind to the economic recovery, notably through its negative impact on household spending. In 2015 -" the most recent year for which Eurostat data are available -" at the aggregate eurozone level direct energy spending represented between 9% and 10% of total household spending, making it the third-largest cost item after food and housing.

The weight in total consumption of spending on “electricity, gas and other fuels”, which is defined by France Strategy as ‘pre-committed spending’1, is negatively correlated with the income level of households. However, this is not the case for spending related to the “use of private vehicles” (for which fuel constitutes the majority of total costs), which is considered as a ‘weakly compressible’ expenditure, and which takes a greater share of total spending for the middle classes and the wealthiest. Given that a sizeable share of the less well-off own no car, or fewer cars, the average weight of this expenditure item for the first quintile is inevitably lower.

However, given the low savings rate of households at the lower end of the income distribution, the latter risk being forced to reduce their spending in the face of the current energy shock, which would weigh on aggregate consumption.

It is worth noting that there are substantial differences in the breakdown of spending between countries. Electricity bills make up a higher share of spending -" across all income groups -" in Germany than in France or Spain2; this is due to the ‘green’ surcharge in Europe’s largest economy, although this will be cut from 6.5% to 3.7% in January 2022. In France and Spain, motor fuel costs have a relatively larger impact on how consumers spend their money.. 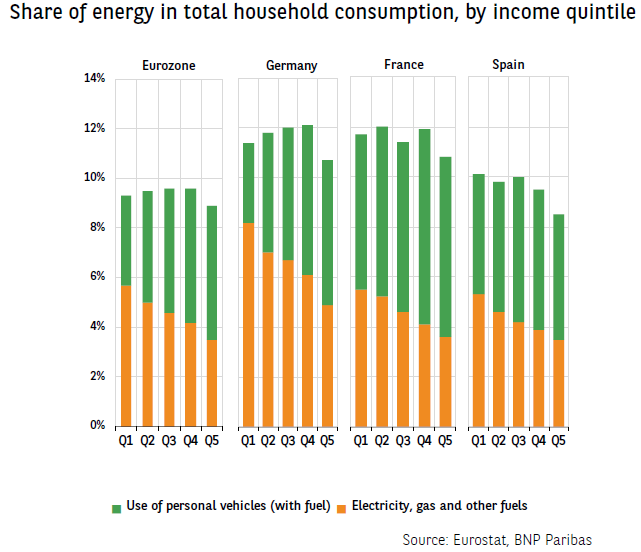