If you look at the manufacturing data only, the relative strength of the jobs figures surprised. Another positive development were the upward revisions for August and July. The unemployment rate again dropped, this time to 3.5 percent. What will that mean for the Fed and gold?

The U.S. created only 136,000 jobs in September, following an increase of 168,000 in August (after an upward revision). The nonfarm payrolls were short of the analysts’ forecast of 150,000. The gains were widespread, spearheaded by education and health services (+40,000) and professional and business services (+34,000). Manufacturing, which is in recession, and retail trade, which faces overcapacity, cut jobs.

However, the weak headline number was accompanied by upward revisions in August and July. Counting these, employment gains in these two months combined were 45,000 higher than previously reported. Consequently, the job gains have averaged 157,000 per month over the last three months, and 161,000 so far this year, still significantly below the average monthly gain of 223,000 in 2018.

Although the pace of hiring has slowed (see the chart below), the U.S. economy is still creating jobs at a reasonable pace. Indeed, the job creation pushed the unemployment rate down, from 3.7 to 3.5 percent, the lowest level since 1969. It means that the U.S. labor market is likely to further contribute to the longest economic expansion on record, at least for the time being. 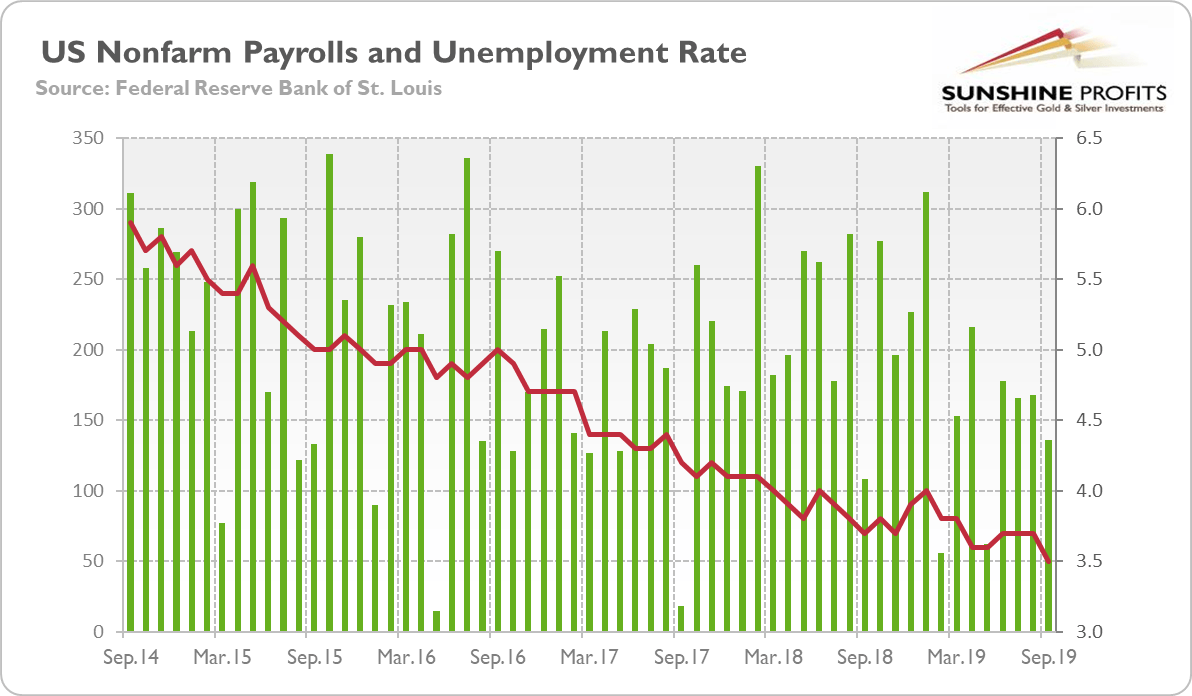 The labor force participation and the employment-population ratio were little changed. It means that the decrease in the unemployment rate was not caused by people dropping from the labor market. Meanwhile, the average hourly earnings for all employees on private nonfarm payrolls have increased 2.9 percent over the last twelve months, which is a decline from the August 3.2 percent rise. This slowdown in the wage inflation should not significantly impact the Fed’s stance, however.

Hence, the U.S. labor market shows resilience in general. The recession in manufacturing sector has not translated into higher unemployment rate, at least not yet. As a result, the overall economy is still doing relatively well, which is bad news for gold prices.

The latest Employment Situation Report does not support expectations of another interest rate cut in October. The Fed has reduced the federal funds rate twice this year as an insurance against the possible recession. The U.S. labor market does not signal an economic downturn and does not justify a further interest rate cut. That’s not the conclusion that the gold bulls would like to hear. It seems that they need some new, positive fundamental developments to take prices higher.

However, the case is not lost. The precious metals investors should remember that the unemployment rate is more of a lagging rather than a leading indicator. So any potential economic weakness will be revealed in the employment report with a certain lag.

And the Fed may still deliver another interest rate cut, the solid employment situation nonetheless. After all, both the 2019 easing moves occurred not because of, but despite the signals coming from the labor market. The market odds of the 25-basis point interest rate cut in October stand at almost 75 percent! Tomorrow, the minutes from the recent FOMC meeting will be published – and they could provide some insights into the Committee’s thinking. If the minutes are more dovish than expected, the yellow metal should shine. But if they are more hawkish than expected, the gold prices could drop.