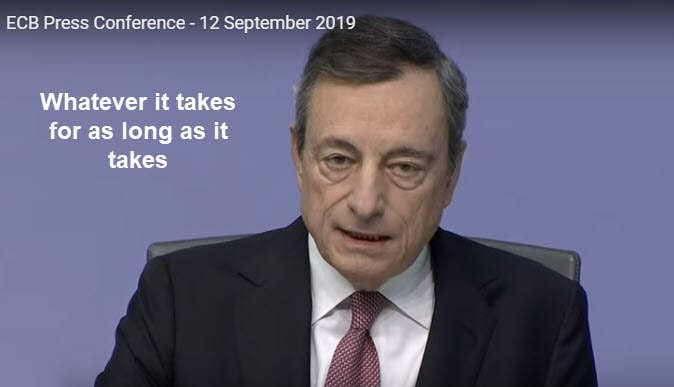 As Long As It Takes

(2) Net purchases will be restarted under the Governing Council’s asset purchase programme (APP) at a monthly pace of €20 billion as from 1 November. The Governing Council expects them to run for as long as necessary to reinforce the accommodative impact of its policy rates, and to end shortly before it starts raising the key ECB interest rates.

(3) Reinvestments of the principal payments from maturing securities purchased under the APP will continue, in full, for an extended period of time past the date when the Governing Council starts raising the key ECB interest rates, and in any case for as long as necessary to maintain favourable liquidity conditions and an ample degree of monetary accommodation.

(4) The modalities of the new series of quarterly targeted longer-term refinancing operations (TLTRO III) will be changed to preserve favourable bank lending conditions, ensure the smooth transmission of monetary policy and further support the accommodative stance of monetary policy.

(5) In order to support the bank-based transmission of monetary policy, a two-tier system for reserve remuneration will be introduced, in which part of banks’ holdings of excess liquidity will be exempt from the negative deposit facility rate.

In the Press Conference Introductory Statement the ECB commented on the "continued shortfall of inflation with respect to our aim", noting that "incoming information indicates a more protracted weakness of the euro area economy and muted inflationary pressures."

"The risks surrounding the euro area growth outlook remain tilted to the downside. These risks mainly pertain to the prolonged presence of uncertainties, related to geopolitical factors, the rising threat of protectionism and vulnerabilities in emerging markets," said Mario Draghi.

No surprise after the ECB cut.

The head of the Denmark Central Bank is Lars Rohde.

Trump should offer the Danes a deal ... send Lars to the U.S. to run the Fed and they can keep Greenland.

Trump complained about the strong dollar, Euro depreciation, and Europe getting paid to borrow money.

European Central Bank, acting quickly, Cuts Rates 10 Basis Points. They are trying, and succeeding, in depreciating the Euro against the VERY strong Dollar, hurting U.S. exports.... And the Fed sits, and sits, and sits. They get paid to borrow money, while we are paying interest!

A few days ago, Eric Dor, Director of Economic Studies at the IESEG School of Management in Paris emailed an article with some interesting charts regarding the Counterproductive Interest Rate Policy of the ECB.

Shortly after posting Dor's take, Lacy Hunt at Hoisington Management, pinged me with these comments.

"Dor's article is outstanding. This is consistent with the great theoretical economics of the late Stanford economist Ronald McKinnon who argued that even before interest rates fall below zero, the counterproductive feedback loops outweigh the benefits of the lower rates even if the interest rates are lower in real as well as nominal terms. If you are not familiar with McKinnon's economics, I strongly urge you to do so." 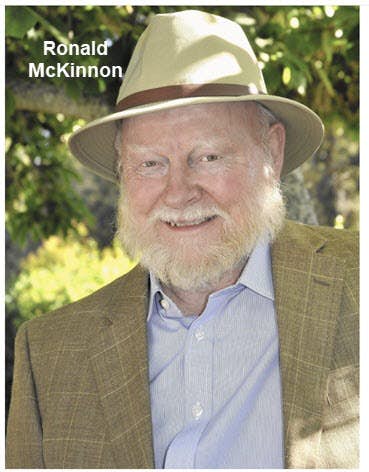 Ronald McKinnon, a retired professor of economics at Stanford University who warned Federal Reserve policy makers including former Chairman Ben Bernanke that its large-scale asset purchases would harm the economy, has died. He was 79.

McKinnon specialized in international trade and finance, economic development and monetary theory and policy during his five decades at Stanford. The author of numerous academic papers, he also wrote eight books, including “The Unloved Dollar Standard: From Bretton Woods to the Rise of China” (2013). In addition, he worked as a consultant to central banks, the World Bank and the International Monetary Fund.

In the early 1970s, McKinnon helped introduce the concept of financial repression, the idea that government intervention in credit markets impedes economic growth.

In 2010 McKinnon was one of 23 economists and investors who wrote an open letter to Bernanke, then the Fed’s chairman, calling for him to end the central bank’s quantitative easing program of buying bonds to keep interest rates low.

“We disagree with the view that inflation needs to be pushed higher, and worry that another round of asset purchases, with interest rates still near zero over a year into the recovery, will distort financial markets and greatly complicate future Fed efforts to normalize monetary policy,” the letter said.

In addition to his scholarly work, McKinnon wrote opinion pieces for the Wall Street Journal, the Financial Times and other financial publications. He was critical of U.S. government pressure on China to speed up the appreciation of its currency to end trade imbalances between the two countries.

“Focusing on the yuan-dollar rate is a serious distraction, and it’s time for the U.S. to back off from bashing China over problems that are born mostly at home,” he wrote in a 2010 Bloomberg News column.

Thanks to Lacy Hunt for throwing a well-deserved spotlight on Ronald McKinnon.