After a barrage of 75 bps hikes over the past four FOMC meetings, we look for the Committee to tighten policy at a slower pace in December and raise the fed funds target range 50 bps to 4.25-4.50%.

The downshift in the pace of tightening follows signs that inflation is finally beginning to ease. All three of the major U.S. inflation indices came in cooler than expected in October. That said, the November employment report showed that the labor market remains very tight, which argues for another rate hike in excess of only 25 bps.

Although the recent moderation in price growth is encouraging, it is merely an initial step in what is still likely to be a difficult journey in returning inflation to the Fed's 2% target on a sustained basis. Policymakers appear weary of reading too much into a single month's data given inflation has proved more persistent than expected this past year.

The post-meeting statement and the quarterly update to the Summary of Economic Projections (SEP) are both likely to signal that the tightening cycle is far from over as a result. We look for the statement to maintain that “ongoing increases” in the fed funds target will likely be appropriate, but that message is likely to ring louder via the “dot plot”. We expect the median estimate for the fed funds target range at the end of 2023 to reach 5.00-5.25%, 50 bps higher than projected in September, and about 15-20 bps above what markets currently project.

Despite the palpable relief on inflation in October, FOMC projections for price growth over the next year are likely to be little changed. But, we expect the SEP to show modestly weaker economic projections in the form of lower estimates for GDP growth and higher estimates for the unemployment rate. Together, these adjustments will suggest that policymakers view the path to wringing out inflation without tipping the economy into a recession as remaining narrow.

Easing up off the brake ever so slightly

Resilient economic growth amid inflation that is still far too hot is keeping the FOMC firmly in tightening mode. A moderating pace of economic activity alongside glimmers of inflation finally heading lower lead us to expect the FOMC will proceed more slowly at its upcoming meeting on December 14. After four consecutive 75 bps hikes, we look for the Committee to raise the fed funds rate by 50 bps to a range of 4.00-4.50%.

Economic activity since the FOMC last met on November 2 has shown few signs of buckling outside the most cyclically-sensitive sectors of housing and manufacturing. Consumers appear indefatigable, with real spending picking up in October and rising at a 4.8% annualized clip the past three months. Job growth remains strong. Nonfarm payrolls rose by 263K in November which has helped to keep the labor market tight (Figure 1). Notably, inflation shows signs of finally starting to ease. In contrast to data ahead of the November meeting, the most recent reading of all three of the major U.S. inflation indices – the Consumer Price Index (CPI), PCE deflator and Producer Price Index – came in below expectations on both a headline and core basis. 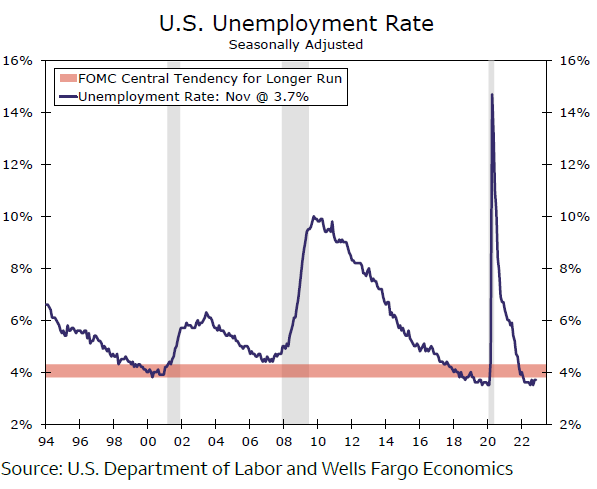 The Committee will see one more key inflation report with the release of the November CPI on Tuesday, December 13 a few hours before the two-day meeting kicks off. But despite the potential for a surprise, one way or the other, in today's volatile inflation environment, we do not expect it to sway the FOMC from a 50 bps hike. The FOMC established a buffer between a single policy move and single data print by highlighting the cumulative amount of tightening done this year along with the lagged effects of monetary policy changes in the November post-meeting statement.

Gold trapped bulls into the Fed and NFP Premium

Gold prices steadied, with gains capped by the stronger dollar and analysts at TD Securities argued that the yellow metal need only close above the $1,935 range to catalyze a marginal buying program, whereas a close below the $1,890 mark is required to spark a trend follower selling flow.