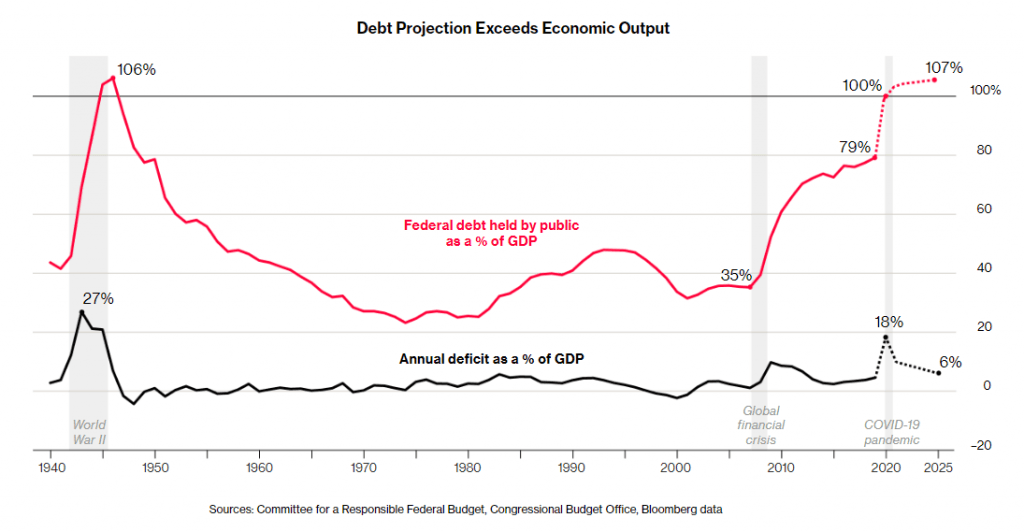 The first chart above shows that the U.S. budget deficit did not amount to double-digit negative figures for multiple years. Nonetheless, 2020 was different due to COVID-19. Stimulus spending and lower revenues from the recession could trigger a double-digit deficit. Total national debt is the other important metric that shows when government spending encountered a head-on collision historically. The U.S. is probably crossing a 100% debt-to-GDP ratio. This metric had a historical default probability of about 2.2%. 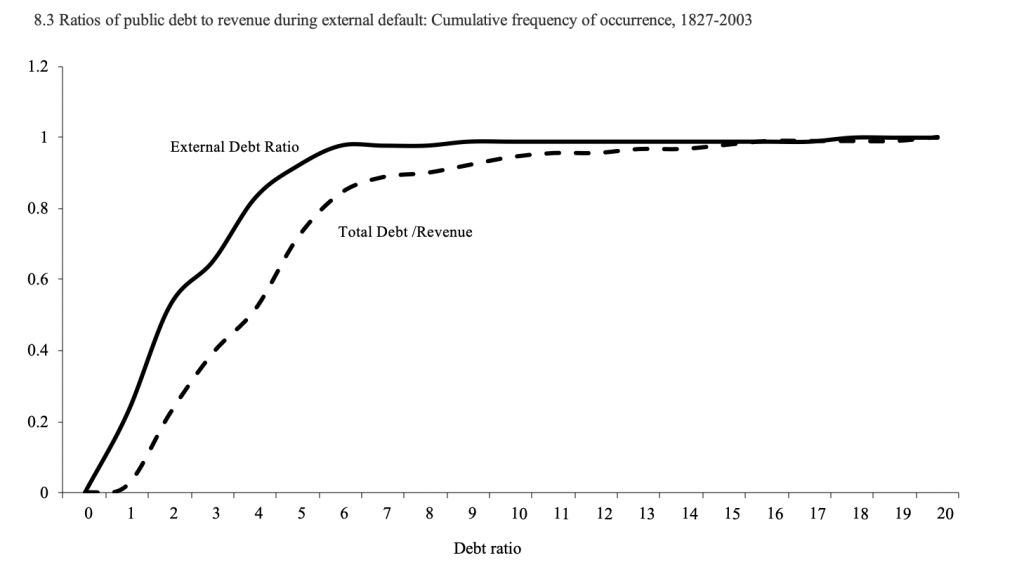 Both metrics, budget deficit and government debt, do not hint to default or hyperinflation in the U.S. near term. The wildcard remains monetary policy, which will bring the Fed’s balance sheet to roughly 10 trillion this year. That amounts to another 47% of the total GDP. It needs to be added to the big picture and sends a clear message that the U.S. government cannot afford to spend the next decade as it did during the past one. Otherwise, total federal debt enters the 2-3 debt-to-GDP ratio band, which has about 50% odds of a significant shock to the financial system.

To put that into everyday language: The U.S. is on a mid-term path to either default or hyperinflation unless its spending policy changes significantly. The “free money” environment that allows governments to take debt at no or even negative cost is unsustainable. The U.S. and Western economies have reached historically high levels of leverage. Further debt-driven growth seems less likely than a deleveraging process in the near future. Growth has been subdued in comparable situations historically. The best results (least painful) occurred in periods of moderate inflation. It should be therefore quite tempting for policymakers to target an inflation rate of 4-5% along with economic growth. This figure effectively halves the total debt burden during a 10-year period.

The problem is that the complexity of the real world makes it harder to achieve this target. Moreover, there are natural conflicts of interest between politicians who get elected for 4-5 year terms and long-term economic goals. Keynesian policymaking has not been properly applied in recent history. The US economy went with a sizable Debt/GDP position into the global financial crisis 2007-2008. A long economic expansion preceded this financial crisis. Again, the same thing happened into the 2020 crisis. Diligent Keynesian politics would have resulted in a very strong financial position of the Government going into both crisis. Obviously, no politician wants to take the foot off the gas pedal and rather individualize economic success to their own account. Similarly, central banks around the world expanded their mandate. Today, they are more powerful than ever before. Not only central bank balance sheets increased but also borders of what is acceptable and what not get shifted. The BoJ and SNB have, for example, bought risky assets such as equities. As a result fiscal and monetary positions increased during economic expansions and contractions.

The bottom line is that the US faces a high and increasing debt level. Some moderate inflation is the best way out. Central banks have a terrible track record in identifying asset bubbles as well as cycle turns. This makes inflation likely as soon as animal spirits return to the economy. It will probably overshoot the preferred targets of policymakers. Therefore, some high single-digit inflation in the U.S. won’t be big a surprise.

GBP/USD bears the burden of risk-aversion while snapping a three-day winning streak above 1.41 ahead of the London open. That said, the cautious sentiment ahead of the key UK Q1 GDP and the US CPI weigh on the cable.