It was certainly a busy day in the economic space on Wednesday.

Early hours witnessed annual inflation (CPI) slow in October to 6.9%, following a 7.3% increase in September, according to the Australian Bureau of Statistics. Price rises were greatest in housing (10.5%), food and non-alcoholic beverages (+8.9%), furnishings, household equipment and services (+7.8%) and transport (+7.4%). The aftermath of the release observed a moderate spike lower in the AUD/USD currency pair to a low of $0.6670, though price retested pre-announcement levels shortly after and rallied to dethrone $0.67. Post the inflation print, the ASX 200 also observed an acceleration to the upside, rallying 0.6% in the space of 20 minutes before levelling off around 7,279.

“This month’s annual movement of 6.9 per cent is lower than the 7.3 per cent movement in September, however CPI inflation remains high.”

“Typically, annual updates to the weights have limited impact on the overall CPI. This year, however, the significant changes in spending patterns over 2021 and 2022 meant that the reweight had a larger impact on the CPI than usual. The annual movement of the monthly CPI indicator in October, using the previous weights, would have been 7.1 per cent compared to 6.9 per cent using the new weights.” 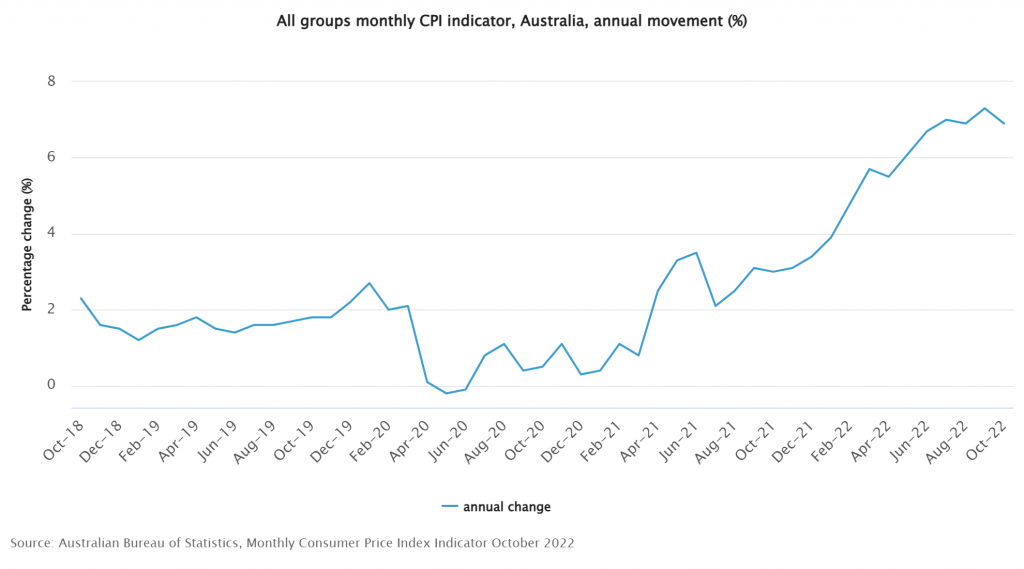 Mid-morning trading in London greeted the latest euro area inflation. On a year-over-year basis, the consumer prices index (CPI) eased to 10.0% in November, down from 10.6% in October and beating economists’ estimates of a 10.4% increase. According to Eurostat, energy prices slowed to 34.9% in November from October’s 41.5% print. There was, however, a moderate increase in prices for food, alcohol and tobacco, rising to 13.6% on the month from 13.1% in October. This underpins the possibility for a smaller rate hike at 15 December meeting, with markets currently pricing in a 56.5% probability for a 50 basis-point increase over a 43.5% chance of another 75 basis-point hike.

Netherlands saw the largest deceleration in consumer price increase, slowing from 16.8% for October to 11.2% in November. Latvia, Lithuania and Estonia currently have the highest annual inflation—all in the low 20s—with France, Malta and Luxembourg boasting the lowest annual inflation rates of between 7.1% and 7.3%.

US ADP payrolls surprises to the downside

Over in the US, we saw that payrolls, according to the payroll processing firm ADP, slowed considerably in November, adding a paltry 127,000 new payrolls, down from 239,000 in October, and far under the consensus median estimate of 200,000.

“Turning points can be hard to capture in the labor market, but our data suggest that Federal Reserve tightening is having an impact on job creation and pay gains,” said Nela Richardson, chief economist, ADP. “In addition, companies are no longer in hyper-replacement mode. Fewer people are quitting and the post-pandemic recovery is stabilizing.”

Job openings—the total number of open and available positions—in the US nudged lower to 10.3 million in October, according to the US Bureau of Labour Statistics. This follows September’s downwardly revised increase of 10.69 million and almost matched economists’ median estimate of 10.3 million. This also shows the labour market is displaying signs of cooling as the US Federal Reserve is poised to raise the Fed Funds Target range in mid-December by 50 basis points to 4.25-4.50%, according to Fed Funds futures data.