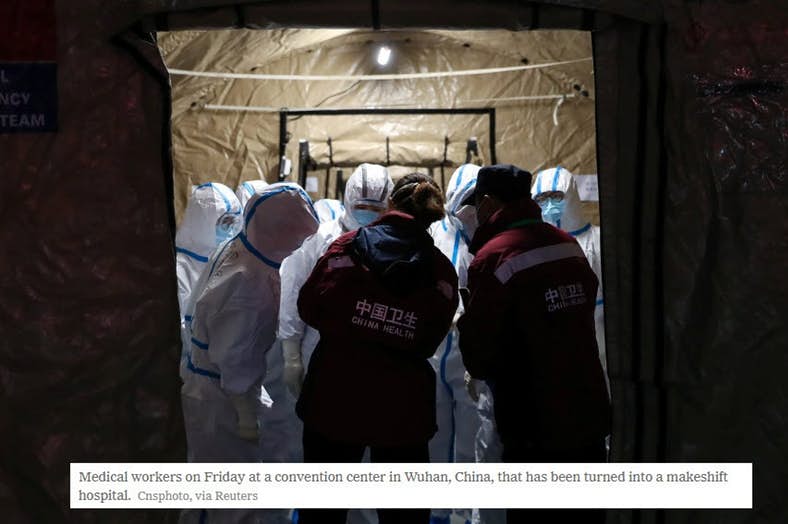 One of the coronavirus fears was the possibility of super-spreaders. That possible fear is now reality,

A New Report on 138 Coronavirus Cases Reveals Disturbing Details including the emergence of a super-spreader.

One patient, admitted to a hospital in Wuhan, China, infected at least 10 health care workers and four other patients [actual suspect total is 57 see study below].

The patient who infected so many health workers had been placed in a surgical ward because of abdominal symptoms, and the coronavirus was not initially suspected. Four other patients in that ward also contracted the disease, presumably from the first patient.

The incident was a chilling reminder of the “super-spreaders” in outbreaks of other coronavirus diseases, SARS and MERS — patients who infected huge numbers of other people, sometimes dozens. The phenomenon is poorly understood and unpredictable, an epidemiologist’s nightmare. Super-spreaders led to considerable transmission of MERS and SARS inside hospitals.

The JAMA Report, published on Friday, is among the most comprehensive articles to date about people infected with the newly identified virus.

Of the 138 patients, 57 (41.3%) were presumed to have been infected in hospital, including 17 patients (12.3%) who were already hospitalized for other reasons and 40 health care workers (29%). Of the hospitalized patients, 7 patients were from the surgical department, 5 were from internal medicine, and 5 were from the oncology department. Of the infected health care workers, 31 (77.5%) worked on general wards, 7 (17.5%) in the emergency department, and 2 (5%) in the ICU. One patient in the current study presented with abdominal symptoms and was admitted to the surgical department. More than 10 health care workers in this department were presumed to have been infected by this patient. Patient-to-patient transmission also was presumed to have occurred, and at least 4 hospitalized patients in the same ward were infected, and all presented with atypical abdominal symptoms. One of the 4 patients had fever and was diagnosed as having nCoV infection during hospitalization. Then, the patient was isolated. Subsequently, the other 3 patients in the same ward had fever, presented with abdominal symptoms, and were diagnosed as having nCoV infection.

The data in this study suggest rapid person-to-person transmission of 2019-nCoV may have occurred. The main reason is derived from the estimation of the basic reproductive number (R0) based on a previous study.

In this single-center case series of 138 hospitalized patients with confirmed NCIP in Wuhan, China, presumed hospital-related transmission of 2019-nCoV was suspected in 41% of patients, 26% of patients received ICU care, and mortality was 4.3%.

"Fatality rate in a normal Flu is about 0.1%. When you get into the pandemics, of 1957 and 1968, it goes up to 0.8% to 1.2%. The 1918 pandemic, the famous Spanish Flu, you go up to as much as 2.0%. ... I think I can say we don't know everything about this virus, but it is evolving in a way that it looks like it is adapting itself to infecting much better but we are going to start seeing a diminution in the overall death rate. ... The r0 of this one is supposedly somewhere around 2.0, 2.5, 3.0 depending upon how you model it. Which means that it is a virus that is quite good at transmitting from one person to another."

First US and Japanese Deaths 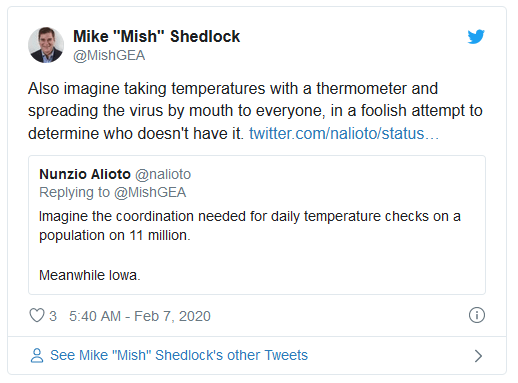 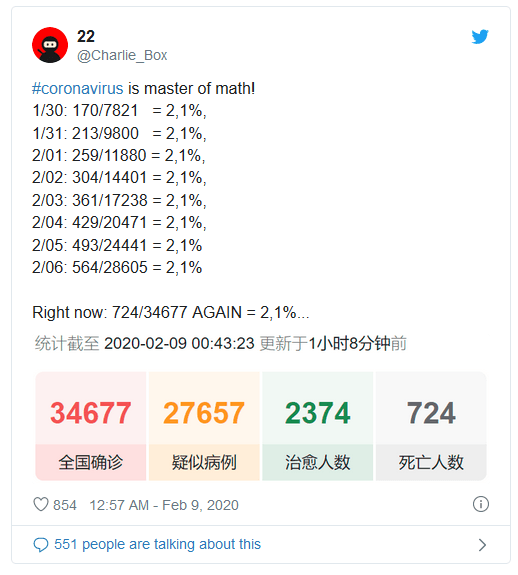 Or Not Enough Test Kits? 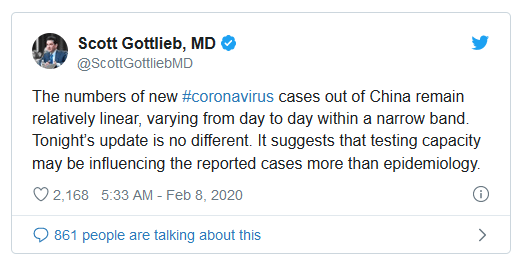 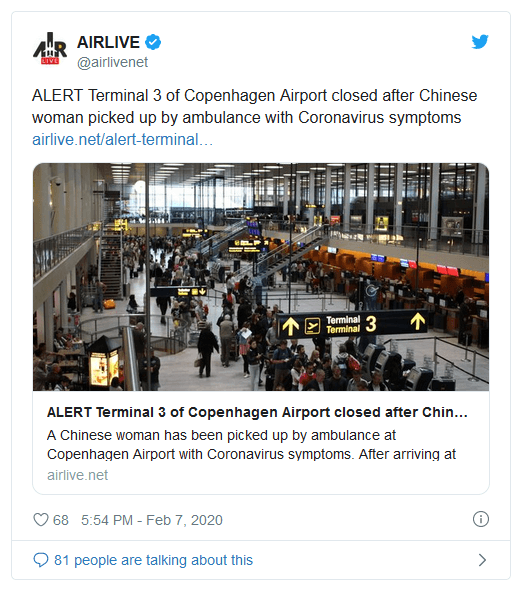 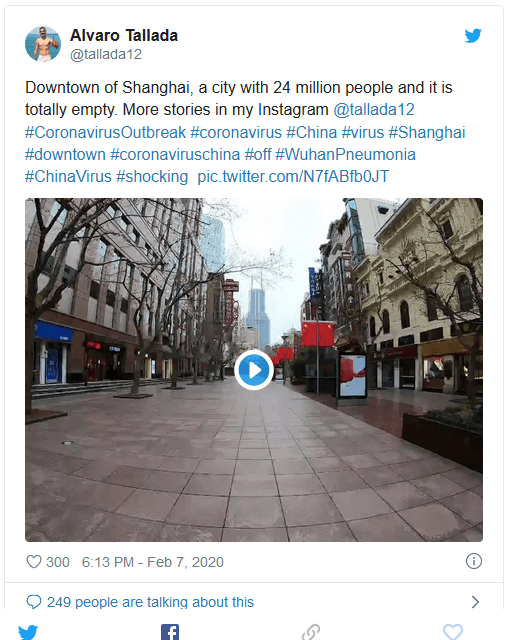 Downtown of Shanghai, a city with 24 million people and it is totally empty! 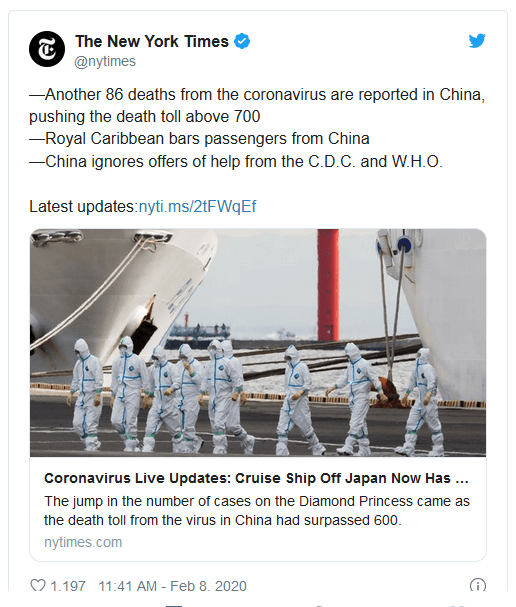 China ignores offers of help from the C.D.C. and W.H.O.

China probably wants and needs US assistance, but it absolutely does not want US reporting or any investigation into the alleged number of deaths.

The streets in Shanghai, population 24 million, are empty.

60 million people are quarantined not even able to leave their houses. That is equivalent to no one in California, Illinois, and Wisconsin being locked in, unable to go to work. The economic hit will be enormous.

I just cannot believe this would happen over the reported 700 dead.

In case you missed it, please see 50,000 New Coronavirus Infections Per Day in China.

EUR/USD is trading around 1.1350, paring back gains amid a rebound in the US dollar. The data published by Eurostat showed on Thursday that the annual CPI in the euro area was 5% in December, matching the market expectation and the flash estimate. Investors await ECB's December Meeting Accounts and mid-tier US data.

DOGE price has seen three major uptrends face blockade around the same hurdle. The most recent rally failed to breach this barrier, leading to a steep correction.