Consumer prices rose 0.1% in January, with the year-ago rate increasing to 2.5%. Excluding food and energy, the trend in inflation remained steady, likely keeping the Fed on the sidelines for the foreseeable future.

Coming in a little lower than expected, the headline Consumer Price Index (CPI) increased 0.1% month-over-month in January, ending a three-month string of 0.2% gains. A low year-ago base, however, took the year-over-year rate up to 2.5% from 2.3% in December—making the strongest annual pace since October 2018.

Taking a closer look at the components, energy prices decreased 0.7% on the month, led by a 1.6% drop in gasoline prices. Food costs rose 0.2% for the second straight month, largely driven by higher food away from home prices. 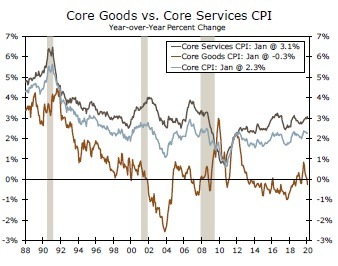 The year-over-year rate of core CPI remained steady at 2.3% in January, with the three-month annualized rate also picking up to the same pace. That three-month annualized rate is still a substantially lower pace than the recent peak at 3.1% in August 2019, and suggests the annual pace of core CPI inflation will remain little changed from its current trend in the coming months.

On balance, the CPI performance shows that the trend in inflation remains steady at the start of 2020. January's core inflation suggests the underlying trend, while in line with the Fed's target in recent months, is still not running at levels that would materially change its outlook. Fed Chair Powell intimated as much at this week's semi-annual monetary policy testimony before both houses of Congress. In his prepared remarks, Powell suggested that the recent inflation cool streak is transitory and inflation should move closer to the 2% target "over the next few months" once the low readings from early 2019 drop out of the year-over-year calculation. In our opinion, however, renewed pressure on oil prices will delay the return of PCE inflation—the Fed's preferred measure of inflation—to 2% even as core PCE begins to climb again in Q1. We have revised our headline inflation forecast lower based on our expectation for lower oil prices this year, though we have kept our core inflation projections unchanged. Like the Fed, we still expect core PCE inflation to rise slightly in the coming months, yet remain just shy of the 2% target. While the potential economic ramifications of the coronavirus increase the probability the Fed will need to become more supportive, based on what we know now and our base case assumptions for the coronavirus outbreak—a noticeable, yet manageable U.S. economic impact—we look for the FOMC to remain on the sidelines for the foreseeable future.