In the 2015 October edition of the Market Overview, we analyzed the impact of the Chinese slowdown, as well as the stock market crash and the devaluation of yuan, on the gold market. Two years later, it is worth providing investors with an update about the second biggest economy in the world, especially since the 19th National Congress of the Communist Party of China will be held in October.

It will be a key gathering leading to a massive leadership change as five of the seven members of the Politburo Standing Committee, China’s most powerful ruling body, are due to retire. The congress will serve as a test of President Xi Jinping’s power, and who gets promoted may also have significant global impact. Investors expect that the Congress will accelerate implementation of pro-market reforms, but these hopes may be too optimistic, as Xi has already announced the growth target of at least 6.5 percent through at least 2020, which could be hard to achieve while introducing structural reforms.

Anyway, the economic stance adopted by the new leaders will be crucial given China’s recent economic slowdown. As one can see in the chart below, the real GDP growth rate declined from double-digit numbers to 6-7 percent. 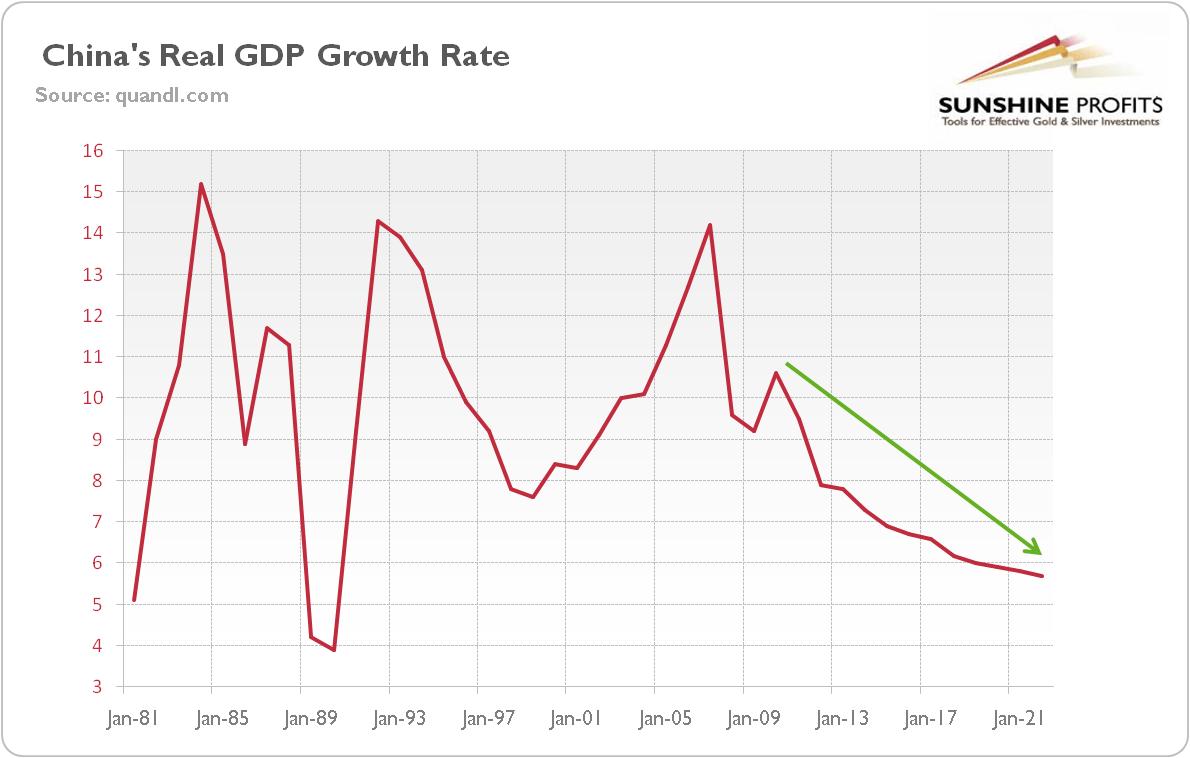 Although unpleasant, the deceleration is not necessarily alarming, given the country’s transition from investment-driven growth to consumption. It’s quite normal that over time there are diminishing returns to further investments. And given that growth was based on unsustainable levels of investment, the switch to a more consumption-led model is actually warranted.

This does not mean that there are no grounds for concern. For example, the rise of the shadow banking system, which operates beyond the regulations, is worrisome. Its share of total credit soared from 10 percent in 2006 to 33 percent currently, leading to an excessive risk-taking and unjustified valuations of different assets, especially real estate.

Another alarming but linked problem is the level of debt. China’s total non-financial sector debt – whichincludes household, corporate and government debt – was 242 percent in 2016 and isexpectedto reachalmost 300 percent of GDP by 2022, according to the IMF. In particular, corporate credit growth has been excessive in recent years, as China’s corporate debt has soared to about 170 percent of GDP, according to the BIS. Although the public debt is smaller problem than the corporate debt, S&P lowered China’s sovereign credit grade from AA- to A+ in September, following a similar Moody’s cut in May.

The high indebtedness increases the risk of a financial turmoil or significantly slower growth in the future at least. And slower growth may spur a debt crisis as troubles set in when people borrow money expecting an average 7 percent annual growth but get only half of that.

Such a scenario could spur some safe-haven demand for gold, but the currency channel should be negative for the yellow metal. Unless there is a serious contagion effect, investors would probably pull into the U.S. dollar. At least, this is what they used to do during financial crises (especially in emerging markets), as the greenback has been viewed as the safe-haven currency for nearly a century. However, since Trump’s chaotic and ineffective administration has severely undermined confidence in the U.S. dollar, this may no longer be the case (which is good for gold).

Summing up, the Chinese economy is in transition and a lot challenges lie ahead of the country. A common view is that the China’s economic success has been based on an unsustainable basis and the collapse is imminent. Although growth is slower while the indebtedness is rising, which could be a toxic mix in the medium-term, the sky is not yet falling. Given China’s low dependence exposure to foreign debt and the fact that most of corporate debt has been incurred by state-owned enterprises, the fears about the imminent financial crisis in China seem to be overblown with respect to the near future. In other words, the condition of the Chinese economy is not as bad as it often is perceived. Drawing the analogy between China today and Japan in the 1980s is tempting, especially given rising debt, the real estate bubble and zombie companies in both economies, but there are also important differences, such as the stage of development or the exchange rate policy. Gold investors should, thus, remember about medium-term risks, but they should not take their short-term decisions about purchasing gold based solely on the doom scenarios for China.