The Canadian Dollar has definitely been in the spotlight the past two weeks as it has held onto an unexpectedly long bull run. How long can the Loonie last on its current trajectory? Will it continue its magnificent run, or will its proponents start to pull up on the reins?

Effectively, Canadian bears were demolished as the CAD strengthened against its trading partners.

The prolonged bullishness was set off by the Hawkish tone of the Canadian Central Bank at the end of the preceding week. For one, the Central Bank announced on April 23 that they would be cutting the value of bonds that it buys each week because the economy appears to be recovering. further, the bank also hinted that it was considering interact rate hikes sooner than initially anticipated.

The market accepted this unambiguously good news, the first good news in quite some time, and the CAD began to take off.

The week after the Friday announcement, CAD bulls had the incentive to push even higher as expectations of higher oil and commodity prices began to filter into their decision-making. In a huge sign of confidence for oil prices, Goldman Sachs revised up their 2021 price predictions for WTI Crude by approximately 20 dollars a barrel.

The opportunity was there for a week-long run, and it was whole-heartedly taken by CAD bulls. 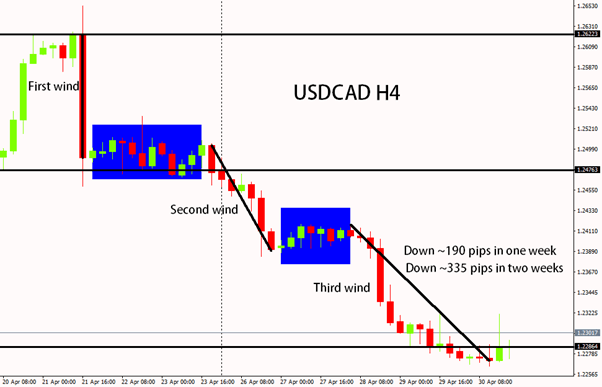 An indication as to how the markets will open on Monday May 3 can be taken from how they closed out on Friday April 30. Below is the USDCAD M30 chart pulled from BlackBull Markets’ MT4 platform. 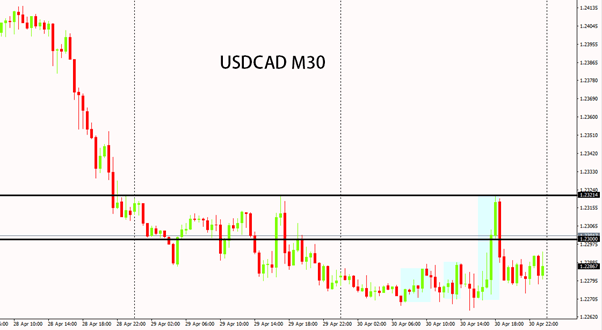 Halfway through Friday, the USD bulls began to regroup to retake the 1.23000 level. A level that they had dubiously enjoyed the day before. This was a short-lived run as they were pushed back before the end of the trading session.

Since late Thursday, either side has not been able to push much in one direction without a sharp correction occurring in the other. Aside from the occasional anomaly, I think the pair may sit at its current level for the medium to short term.

Shifting our attention to economic reports due this coming week:

Several important US reports will be dropped including Balance of Trade for March (Tuesday) and Non-Farm Payrolls for April (Friday). However, Federal Reserve Chairman Jerome Powell iterated numerous times last week during his national address, that the Bank has no impetus to reconsider its Stimulus Spending or record-low interest rate. This all speaks to the Fed's neutral, if not dovish, sentiment for the US economy.

Across the border, the most important report out of Canada is the Balance of Trade for March (Tuesday). A deficit of CAD1.2 billion is expected for the month and will, in all likelihood, fulfill those expectations. It will be interesting to see the effect that rising oil and commodity prices have on the April balance.