For the first time in nearly 30 years the Chinese central bank and the Banking Regulatory Commission announced it would take control of one of its banks. The troubled Mongolia-based Baoshang Bank had assets of 576 billion yuan ($84 billion) and its seizure is indicative of the deteriorating health of small-scale banks, mostly in rural areas and in smaller cities, as China’s economy slows.

The turmoil surrounding its conservatorship has led interbank lending rates to spike, forcing the Bank of China to inject billions of yuan to quell the fear of systemic contagion. For years China’s regional banks have used shadow-financing to obfuscate their exposure to precarious borrowers. While China has made an effort to rein in shadow-banking activity, this is the first time in decades that regulators have assumed control of a bank in this way. In 2015 and 2016, they recapitalized lenders and merged stronger banks with weaker ones, but these restructuring efforts were disorganized, inadequate, and didn’t address the main issue at hand...insolvency.

According to data compiled by Bloomberg, for the first four months of the year companies defaulted on 39.2 billion yuan ($5.8 billion) of domestic bonds. This is 3.4 times the total for the same period during 2018.

With the solvency issues plaguing the smaller banks and the rise in defaults, it is becoming evident that funding needs for China’s major commercial banks are becoming intractable for Beijing. The PBOC is running low on the U.S. dollars it needs for activities both at home and abroad. In 2013, China’s four largest commercial banks had around $125 billion more worth of dollar assets than liabilities. But today they owe more dollars to creditors and customers than are owed to them. 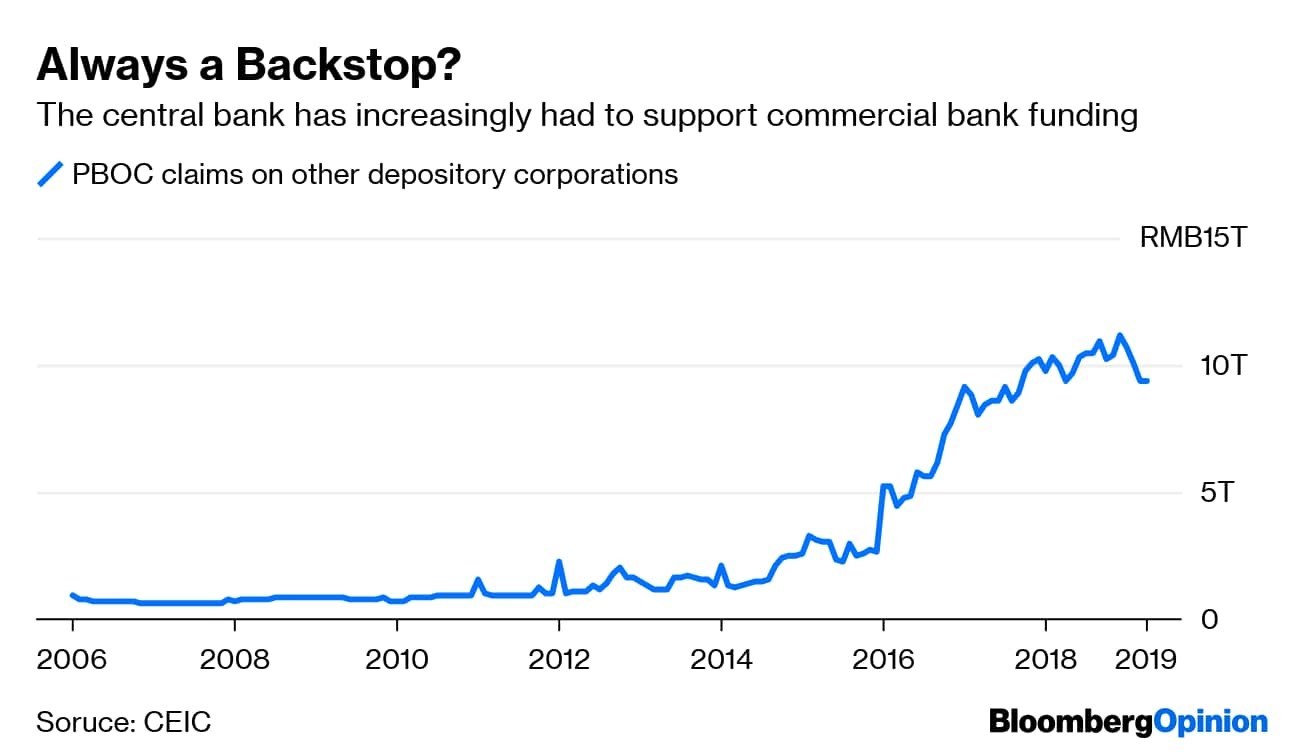 Making things even worse for the Chinese banking system is that its problems extend beyond mainland China; there is a looming banking crisis in Hong Kong as well.

Hong Kong pegs its currency to the US dollar and therefore has been overaccommodative with their monetary policy since 2008. This has led to a massive bubble in real estate. Hayman Capital’s Kyle Bass believes Hong Kong is reminiscent of Iceland, Ireland, and Cyprus, whose banking systems imploded during the European banking crisis. The commonality was that each country had allowed their banking sectors to grow to almost 1,000% of GDP, leaving them vulnerable to the smallest economic hiccup. Bass believes that Hong Kong is in a similar situation with its banking system sitting as one of the most levered in the world at approximately “850% of GDP (with 280% of GDP being lent directly into mainland China)”.

Mainland China would be directly on the hook for Hong Kong’s failure as the two largest banks in that nation (Standard Chartered and HSBC) were once filled with British depositors, but now have mostly Chinese obligations.

China’s government has operated its economy much like a Ponzi scheme. It has been stimulating growth by printing money and issuing debt since the year 2000. This is much the same throughout the developed world. But this practice has been on steroids in since 2009. For example, M2 money supply in has skyrocketed by over 133 trillion Chinese Yuan, nearly $20 trillion during that timeframe. But during that same period, China’s annual GDP grew by approximately only $8.4 trillion—proving much of that debt issuance was of the non-productive variety. Therefore, it takes an ever-increasing supply of new money and debt to grow its economy and continue the economic charade. 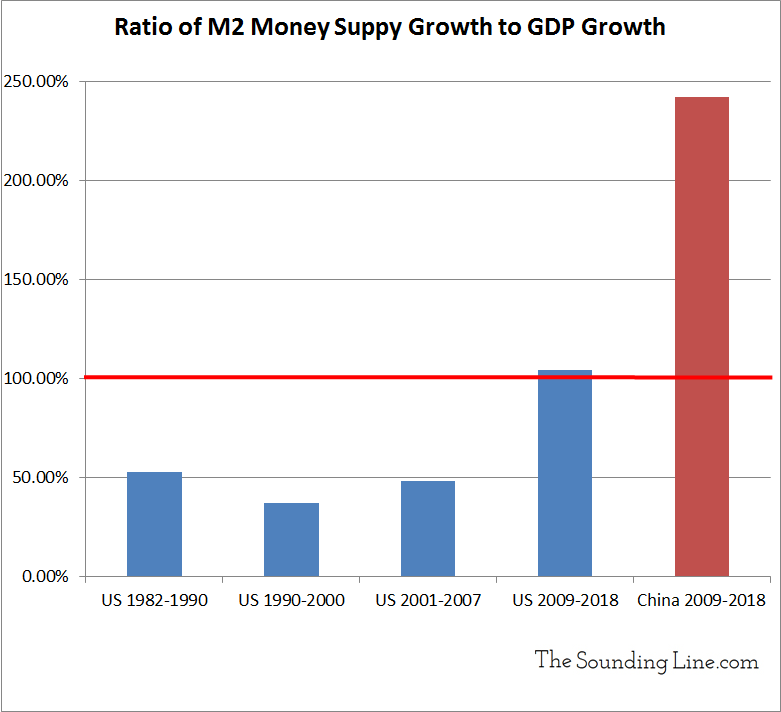 China is in the midst of one of the largest financial bubbles in modern history. The ratio of banking assets to GDP is much higher than the US at the top of the housing bubble and higher than the EU right before its sovereign debt crisis in 2012.

Still, there are many in the market who believe that with the impressive $3.2 trillion pile of foreign exchange (FX) reserves held by China, nothing can go wrong. Those people should note that that figure was $4.0 trillion not long ago and is currently declining at a rate of $100 billion per month.

China is just now experiencing cracks in its banking system that will test their newly established deposit insurance system, making a run on the banks a real possibility. For the Chinese government to save the banks it may have to destroy their currency in the process. As it stands right now, the yuan is getting close to breaking the all-important 7 per dollar key psychological level. If this level is indeed breached, you may see a massive flight of capital out of the Chinese yuan. 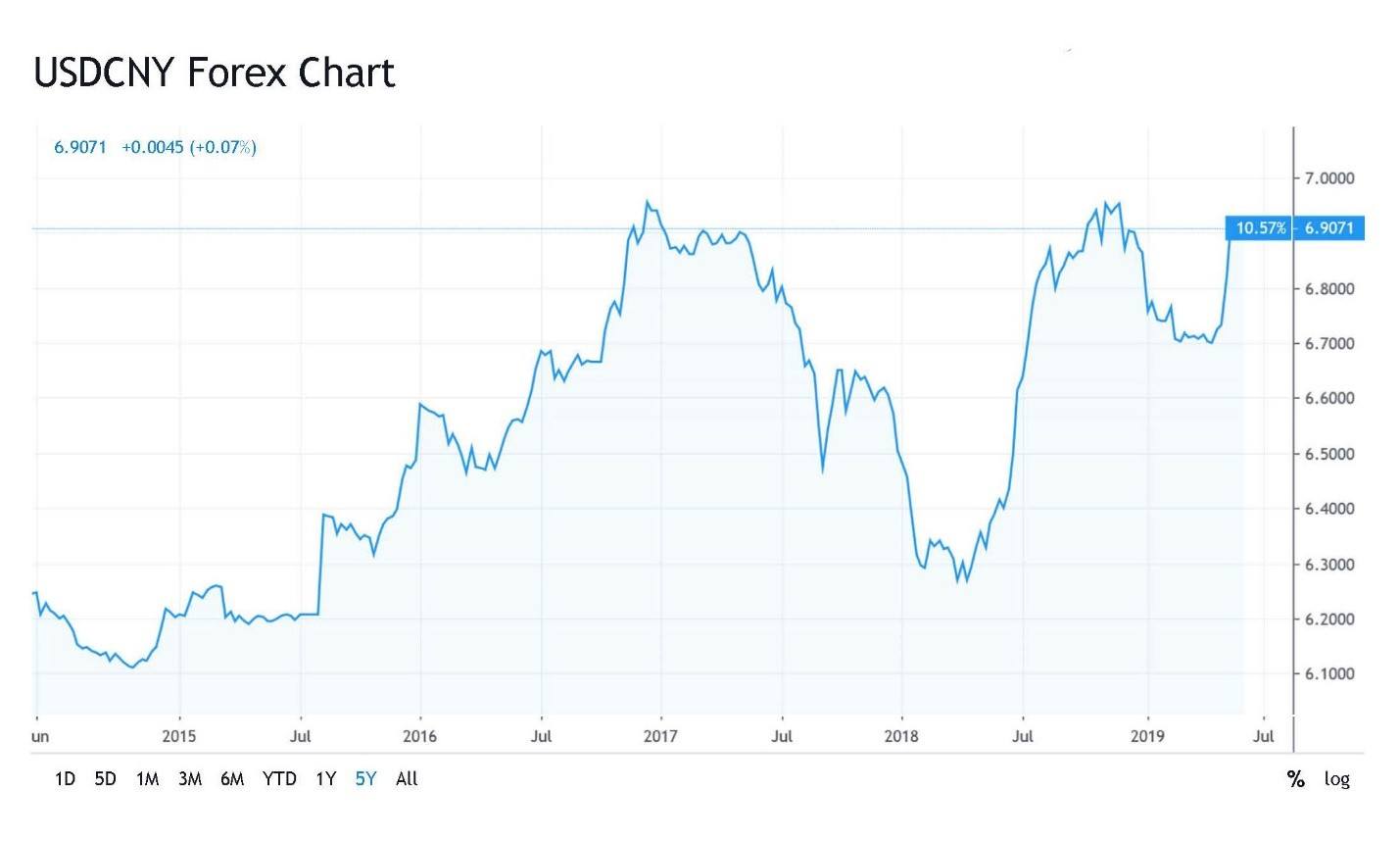 Therefore, the government is forced to continuously issue a massive amount of new currency and debt to keep the economic mirage in place. Yet, at the same time must find a way to keep its currency afloat. This is the Achilles heel of China’s communist command and control economic model and it is negatively affecting the yuan’s purchasing power. Consumer prices in May increased by the most in 15 months, while food inflation spiked 7.7% year over year.

Will the conservatorship of Baoshang bank be the event that finally unravels their banking system’s Potemkin Chinese Wall of solvency?  That still is not clear. But with each new iteration of stimulus, the yuan weakens--even against other currency manipulators like the Fed and ECB.

Very few investors thought back in July of 2008 that Indybank was the canary in the coal mine, which gave an advanced warning regarding the insolvency of much of the US financial system. At the time of the bank’s failure, FDIC Chair Sheila Bair assured markets not to worry and that its failure was well within the range of what they could handle. Fed Chair, Ben Bernanke, also gave assurances that the incipient subprime mortgage crisis was completely contained. It wouldn’t be until later that year when investors realized the full extent of the banking crisis that led to the conservatorship of Fannie Mae and Freddie Mac and the collapse of Lehman Brothers, the takeover of Washington Mutual in September of 2008--and, soon thereafter, the near collapse of the entire global economy.

Given that China’s total debt has quadrupled in the past twelve years, a feat that is absolutely unapparelled in history, it wouldn’t be surprising if the collapse of Baoshang Bank forebodes the same fate for China’s economy as Indybank did for the United States.