The Dollar has held net steady versus the Euro and Yen, paring intraday losses in the case against the latter, while AUDCAD dropped quite sharply amid the juxtaposition of record lows in Australian sovereign debt yields and a Loonie-supporting 2.5%-plus rally in oil prices.

AUDCAD was showing over a 0.6% loss heading into the New York interbank open, earlier printing a 5-week low at $91.86. The Aussie buck was dented by the yield on 3-year Australian sovereign debt dropping below 1% for the first time ever, while hopes that the US and China will resolve their differences have been fading, which is a big concern for the Aussie. The lack of a planned senior-level meeting between US and Chinese officials ahead of the G20 summit in Japan is starting to cause investors consternation, boding ill for there being any meaningful progress at the summit itself.

The Loonie meanwhile, benefited as crude prices rallied, with the USOIL almost completely reversing yesterday’s dive in posting a high at $53.10, up nearly 4.5% from yesterday’s low at $50.72. News that two oil tankers have been damaged following a suspected attack in the Gulf of Oman drove crude higher. Despite the unexpected jump of oil, the asset remains in an overall bearish outlook since end of April. Hence only a break of $57-57.50 area could rise hopes for strengthening of the positive bias.

Turning back to AUDCAD, the strength of Loonie and the weakness of Aussie, drift the pair at 6-month low, while it is in the third consecutive month of downwards move. The overall bearish outlook of AUDCAD looks to hold strongly,  as the daily , weekly and month lower Bollinger Bands patterns extended southwards and momentum indicators are negatively configured. 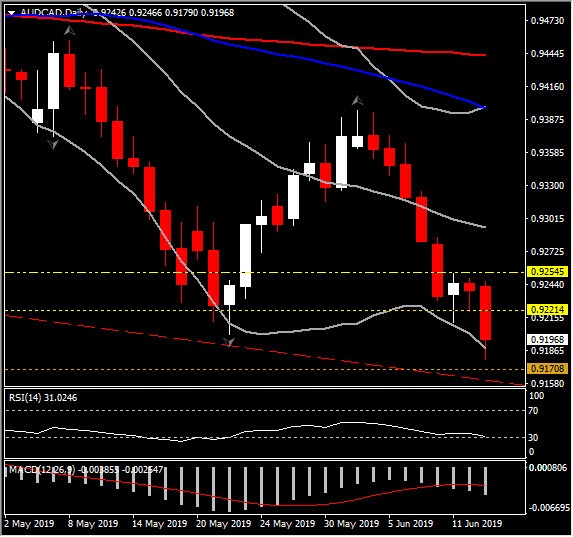 Hence as the technical support the continuation of further collapse, the October 2018 low now looks even more possible than before. The move is well on course for a retest of the 0.9170 immediate Support level  (October-December 2018 low ), while given the strength of the negative momentum run (bearish cross in MACD and RSI at 30), the 0.9100-0.9120 Support area which is nearly 9 year’s low, seems to have been already opened.