Finally, a bear rally worthy of the name! The Dow exploded for a record 1086 points on Wednesday, bouncing the proverbial dead cat nearly to the second floor. Adding a few more floors in the weeks ahead won’t bring kitty back to life, but it will probably suffice to restore some hubris and bravado to the Big Con. We can be certain of one thing — that wherever and whenever the rally peaks, it will set up bulls for their inevitable transformation into road kill. Mr. Market, so very felicitous now and then, will be revving up his Mack truck around the time Jim Cramer gives the all-clear and pundits are wondering how investors could ever have lost faith even momentarily.

Rick’s Picks’ recent track record provides encouragement for thinking subscribers will be properly warned before this occurs. For weeks, we’ve been telling them to stay glued to Apple shares, the better to determine exactly when the stock market’s bullish turn would occur. Right on schedule, as it happened — just as AAPL was bottoming Monday within 45 cents of a $145.66 target bulletined two crucial days earlier.  We reiterated our confidence in an email Tuesday night that was headlined ‘A Last-Ditch Chance for AAPL to Turn the Tide’. Following is what we said. Judge for yourself whether it would have made you money, or at least kept you out of trouble:

It’s hard to imagine AAPL not bouncing from the 145.66 target shown. (It was proffered here earlier as a minimum downside objective.) Monday’s plunge came within 45 cents of this Hidden Pivot support during the holiday-shortened session — close enough for us to infer that a bottom of at least short-term importance is in. If so, expect the stock to lead the broad averages higher when trading resumes on Wednesday. This has been a risky assumption for the last two weeks, to put it mildly, since both AAPL and the broad averages have traded as though weighed down by mountainous supply. Rallies have stalled and then reversed punitively, while days that have begun with weakness simply grew worse.

My gut feeling is that tax selling will keep pressure on shares during the final week of the year. If they are going to rally, however, the best chance to do so will be with AAPL, arguably the most important stock-market bellwether of them all, torqued for a rebound. If conditions look favorable before the opening bell on Wednesday, we’ll look at expiring, near-the-money calls for a potential leveraged play. Stay tuned to the chat room if you want to stay on top of this opportunity, especially if you’ve never made money trading options. 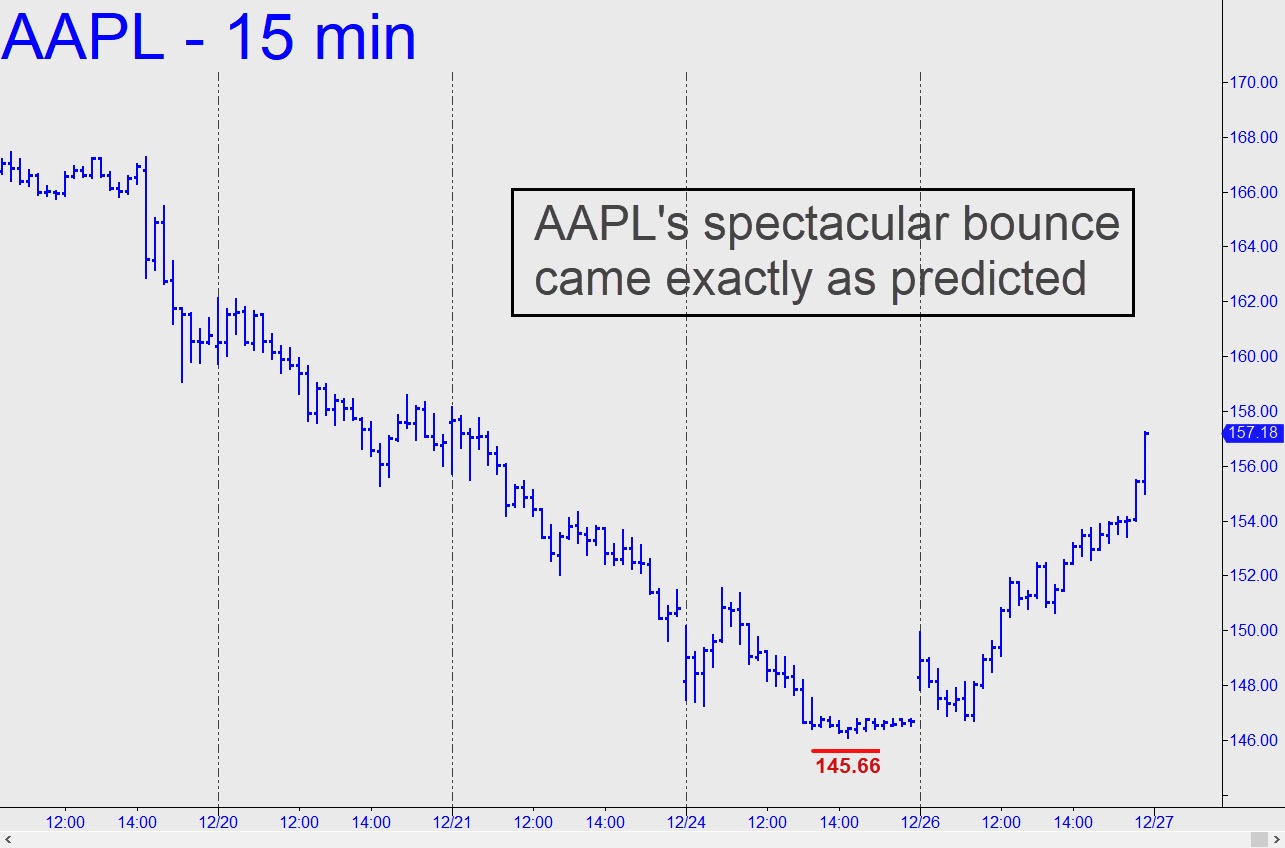