FX trade is well underway for the week, and so far, last week’s theme of US dollar strength has carried over into this session’s trade. The most interesting development among the major currencies is today’s big breakout above 110.00 in USD/JPY, a move that’s taken the pair to its highest level year-to-date.

From our perspective, there are three major factors pushing USD/JPY higher today:

1)     Japanese Traders Out on Holiday

While not necessarily a bullish or bearish factor per se, it’s notable that Japanese banks are closed for National Foundation Day. This means that there’s lower liquidity than usual, especially around the yen crosses. As a result, it takes less capital to move the market if there are any impactful fundamental or technical developments.

On the fundamental side, one of the market’s biggest worries has seen some tentative signs for optimism. Low-level US and Chinese officials are meeting in Beijing this week, with higher-level officials (Mnuchin and Lighthizer) set to join the talks later this week.

According to a report from Axios, President Trump’s advisers are exploring holding a summit between Chinese President Xi and Trump next month. As many analysts have noted, it will likely take such a meeting between the two leaders to reach an agreement, so the news that one may be in the works has boosted the buck at the expense of the safe haven yen.

The positive vibes from the trade talks prompted USD/JPY to break above the key 110.00 resistance level we highlighted last week. This led to a quick cascade of stop buy orders, adding technical fuel to the fundamental flame. Moving forward, that level may provide short-term support on intraday dips, with bulls potentially looking to push the pair toward 111.00 or 111.40 next. 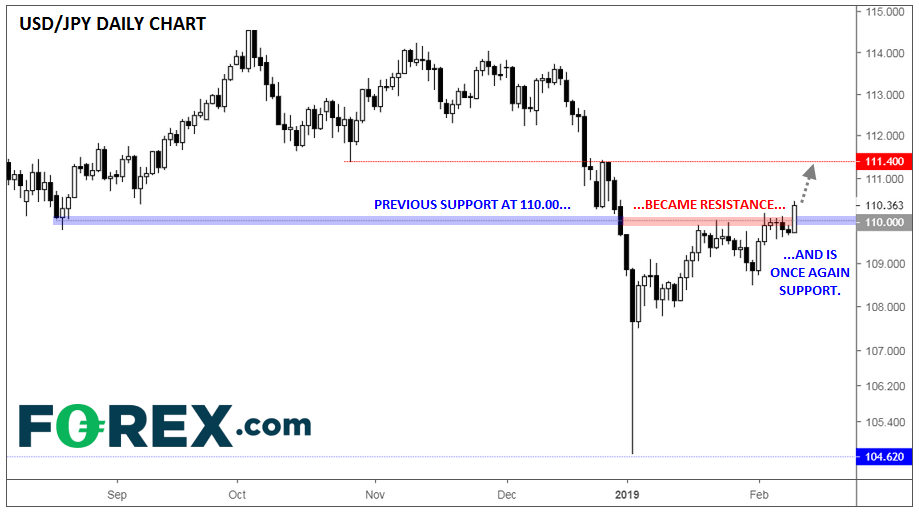