Will General Motors walk away from a deal with Nikola Corporation? Fears of such a move seem to have vanished, making way for hopes that the automobile giant may enlarge its stake in the electric vehicle maker.

CNBC's auto industry reporter Phil LeBeau said talks between the companies are ongoing and that GM may end up scooping up more than the 11% stake it originally planned when the firms announced a partnership early last month. The Detroit giant committed to building and developing the Nikola Badger, a pickup truck, and also to sell fuel cells and batteries.

The fresh hopes replace worrying reports. Short-sellers have alleged that Trevor Milton, Nikola's founder, cheated investors. The publications sent shares down as they were accompanied by fears that GM would abandon the deal altogether.

Is the trouble over for Nikola? It may be too early to tell. It is essential to note that rivals such as Workhorse – which has a promising product – saw its shares falling in recent days. Nevertheless, WKHS may provide a buying opportunity. 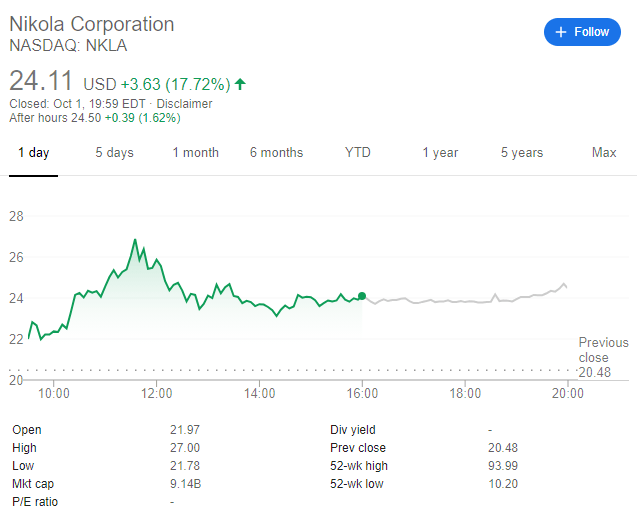 Wednesday's closing price represented a doubling of the 52-week low of $10.20. However, Nikola Corporation's value is far from the 52-week high of $93.99.