Gold remained depressed through the first half of the European session, albeit has managed to recover a part of its intraday losses to eight-month lows. The precious metal was last seen trading near the $1764-63 region, down around 0.75% for the day.

From a technical perspective, slightly oversold RSI on the 1-hourly chart seemed to be the only factor that extended some support to the XAU/USD. That said, oscillators on 4-hourly/daily charts are holding in the bearish territory and are still far from being in the oversold zone. This, in turn, favours bearish traders and supports prospects for further weakness.

However, any subsequent slide is more likely to find some support near a short-term descending trend-line, currently around the $1750 region. Bearish traders could wait for a sustained break through the mentioned support before placing fresh bets. The XAU/USD might then accelerate the fall further towards the $1725-24 support en-route the $1700 round-figure mark.

On the flip side, immediate resistance is pegged near the daily swing high, around the $1775 region. A sustained strength beyond might trigger a short-covering move and push the XAU/USD back towards the $1800 mark. This is closely followed by another descending trend-line resistance, around the $1805-06 area, which if cleared will negate any near-term bearish bias.

Meanwhile, the two converging descending trend-lines constitutes the formation of a bullish falling wedge. Some follow-through buying beyond the weekly highs resistance near the $1815-16 region will add credence to the bullish breakout and set the stage for a further near-term appreciating move for the yellow metal. 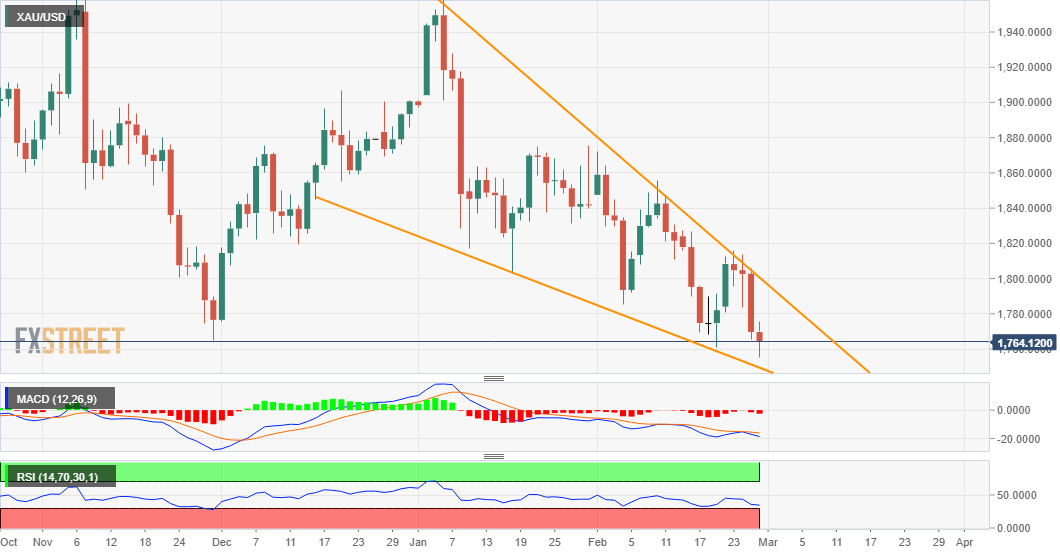