With more than $4 trillion in daily liquidity, the currency markets are the largest markets available to traders. With liquidity that size, opportunity can exist in unexpected places. Although G-10 currencies such as the U.S. dollar, euro and yen dominate much of the trading action, smaller, more exotic currencies can offer further prospects, if you are looking and understand the unique challenges they present.

George Fischer, director of product management at E*Trade, says a whole other world exists outside of the majors. “There are the majors, and there there’s everything else. Within the everything else, you have some pretty established countries of the world, such as Sweden, Norway and Hong Kong. Emerging markets are a subset of exotics,” he says. “First and foremost, exotics are about opportunity.”

That opportunity can come in a variety of ways, from a possible interest rate and carry trade position, to making a play on the commodity markets through a related currency. But, like everything, that opportunity often has a cost, and understanding the unique difficulties of smaller currencies is key to success. A grasp of the market structure goes a long way in alleviating those difficulties.

Like any currency trade, exotic currencies always are traded in pairs. For U.S. traders, it can be easy to assume the U.S. dollar will be the currency base the exotic is traded against, but the base can be any number of other currencies, making it a cross pair. As such, fundamental forex traders have to do double duty researching interest rates and conditions of both countries represented in the pair. “With economics and news becoming a little less pervasive about the currency market in some area, it’s about taking your research to the next level and developing a good fundamental understanding of the two currencies, and how the interactions work between them,” Fischer says.

Bryan Seegers, chief dealer of Alpari (U.S.), says looking for correlations can be a good starting point when you begin looking at exotics (see “Finding correlations). “Look at the country of the currency you’re looking to trade and see what it is profiting from. An example would be that if you’re looking to trade the Russian ruble, you’d be interested in how oil is doing because of that correlation, or vice-versa, the South African rand’s correlation to gold. Being that these countries are producers or consumers of these in a large scale, it’s a large factor to consider,” he says. Additionally, Seegers adds, “Correlations change frequently and checking those is part of doing your due diligence before just investing.” 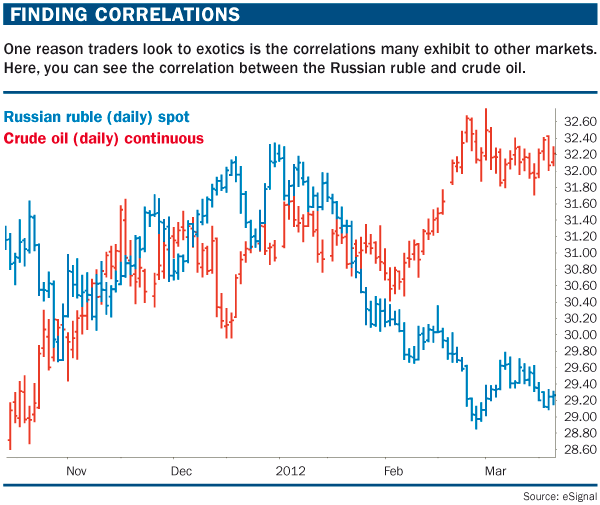 One of the aspects that often draws traders to the currency markets is the availability of leverage. Leverage allows traders to control a much larger position than their account sizes could fund. This means gains can be multiplied, but it also means losses can be more severe as well. Although at one time brokerages offered leverage up to 1:100, the Commodity Futures Trading Commission recently lowered the level brokers could offer to 1:50 for majors and only 1:20 for minors. Consequently, it will take a larger account size to trade exotic currencies than majors like the EUR/USD.

Additionally, because these are smaller markets, you often will see the order book can be much shallower because of less volume. Consequently, it may sometimes be best to restrict your trading to only particular parts of the day when the local market is open for the currency you are trading. “From a structure perspective, there is less liquidity at certain parts of the day,” Fischer says. “The majors all have pretty tight spreads throughout the day, but one of the challenges of the exotics is understanding how to access liquidity you actually can trade against.”

Seegers seconded this recommendation, saying, “With these currency pairs, the majority of the trading that is done, is done during the time zone of the country of origin. When trading [exotic currencies], I would recommend trading them when those markets actually are open and trading as opposed to local time zones when markets may be very thin.” He goes on to say that traders may not even be able to access some of these markets during their local time zone because the liquidity is so shallow then.

Another side effect of less liquidity and volume means that bid/ask spreads will be wider. Whereas deep order books keep these spreads narrow in major currency pairs, that lack of volume in exotics means you need to account for a wider initial spread to make up on any trade. Seegers reminds that leverage multiplies this cost of trading.

Despite these wider spreads, the benefit that attracts a number of traders to exotics is the volatility that can be seen in smaller markets (see “Vast volatility”). Seegers says this volatility comes from a number of different sources. “The spreads are much wider to do business within, there’s a lot less depth in the book of trading — meaning there are fewer banks or counterparties making markets. What that does is make it a less competitive market,” he says. “These wider spreads and lack of depth mean that when the market does move, it can move violently. With the volatility, there are risk and reward ramifications.” 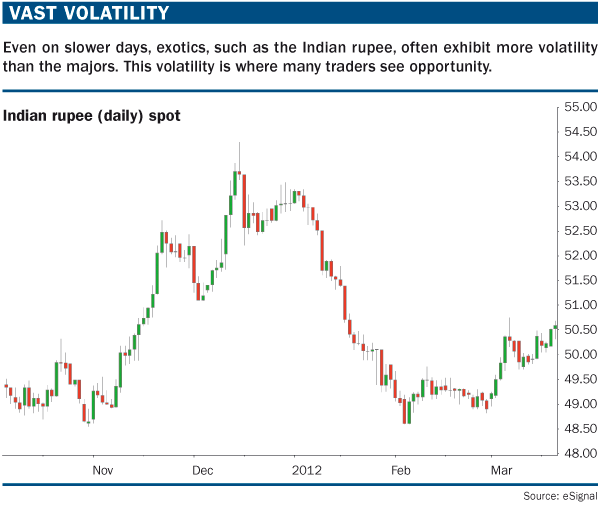 Before you even begin looking at exotic currencies, Seegers recommends talking with your broker about these issues. “It’s important to discuss with your broker that these pairs will be streamed 24/6; that you’ll be able to enter and exit trades with consistent prices during non-market hours for the residing country,” he says. “Be vocal with your broker; open dialogue is crucial.”

World events continue to shape markets with different currencies gaining or losing popularity. Just a few years ago, the Canadian and Australian dollars were considered exotics, but now are major currencies. “An exotic currency of today could be the future currency of tomorrow,” Seegers says.

USD/JPY's bullish bias likely remains intact so long as the spot holds above the upward sloping 21-Hourly Simple Moving Average (HMA) support, now at 108.83. The focus now shifts towards Thursday’s US Jobless Claims for the next direction.

USD/JPY's bullish bias likely remains intact so long as the spot holds above the upward sloping 21-Hourly Simple Moving Average (HMA) support, now at 108.83. The focus now shifts towards Thursday’s US Jobless Claims for the next direction.