A wild altseason continues, with the world’s No. 2 cryptocurrency continuing to lead the market.

Ethereum has continued its torrid performance, and its dominance in the decentralized finance (DeFi) space has it set to extend its current run to new all-time highs.

Despite tremendous network congestion and sky-high gas fees, the second-largest cryptocurrency by market capitalization is retaining its advantage as first adopter.

Ethereum is trading well above than its 21-day moving average, and there’s no reason to think that a big change will occur with the exceptions of reasonable profit-taking or a market-wide correction. 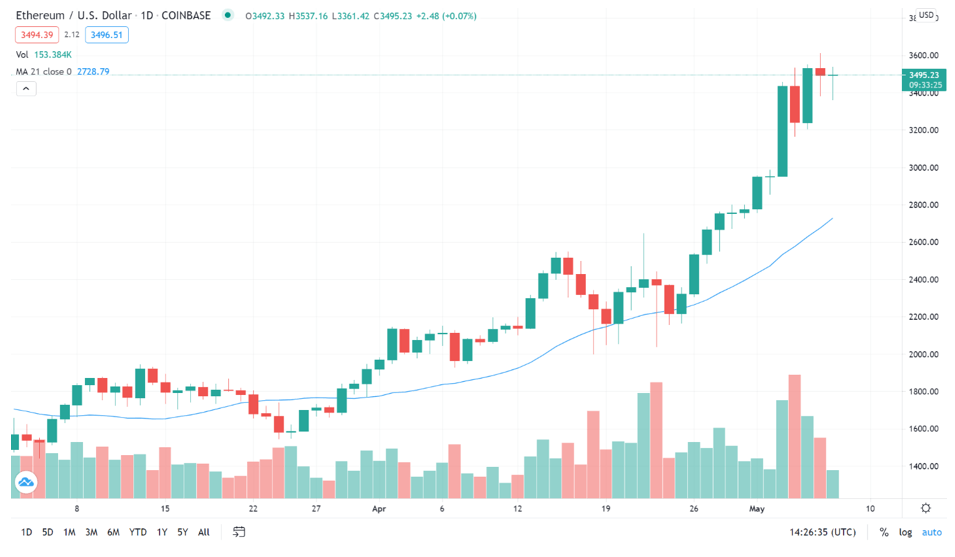 Bitcoin has managed to retake its 21-day moving average, which is a positive sign. If it’s able to sustain above this measure despite the outflows into altcoins and the reduction of its market dominance, it’s a highly bullish sign for another potential breakout.

While Bitcoin has struggled lately in comparison with the rest of the crypto market, it has at least recovered from its correction lows under $50,000. While it’s possible we could see a retest of these levels if it breaks below its critical 21-day moving average, it could break out in a big way if the levels hold. 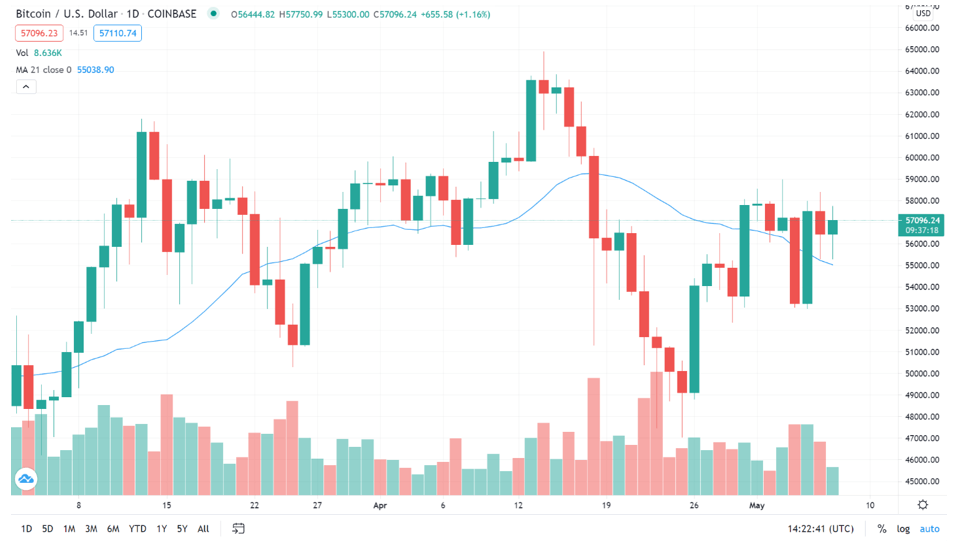 This week marked another extremely strong period for altcoins and the crypto market as a whole. In an unsurprising continuation of altseason, Bitcoin lost ground to the altcoins and its market dominance shrank.

This makes sense as a function of its trading pairs being used to purchase smaller projects and as a side-effect of the hunt for massive gainers during a period with extremely wild price action.

However, Bitcoin’s fundamentals are still extremely strong, and corporations continue to pile it onto their balance sheets. 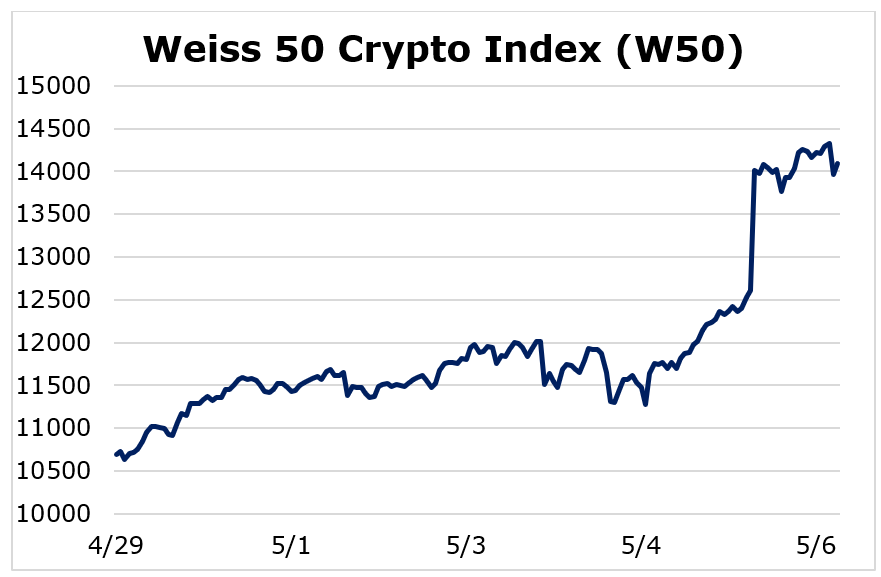 The Weiss 50 Crypto Ex-BTC Index (W50X) gained 45.69% as Bitcoin notably couldn’t keep pace with most of the crypto market. 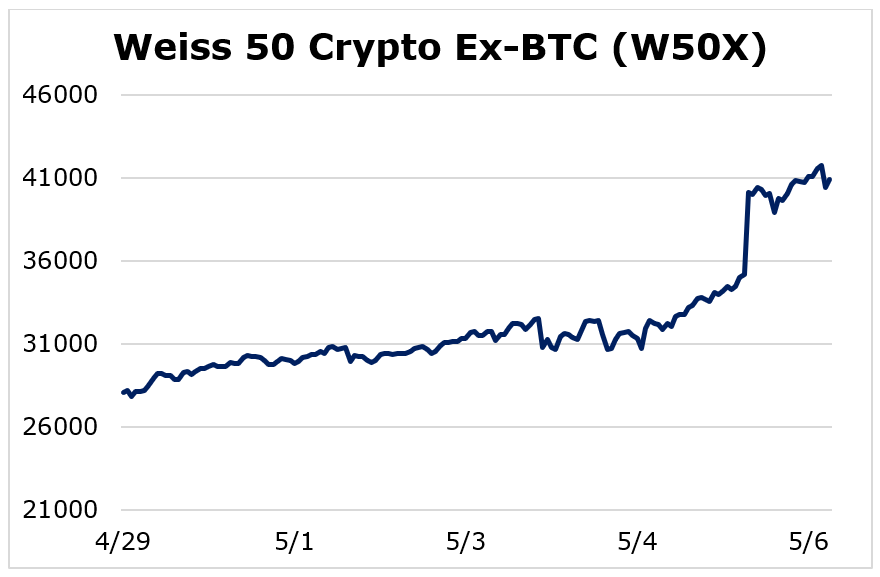 Breaking down this week’s performance by market capitalization, we see that the mid-caps outperformed both the large- and small-caps.

The Weiss Large Cap Crypto Index (WLC) grew 26.94%, but it was dragged down by Bitcoin’s comparably sluggish week. 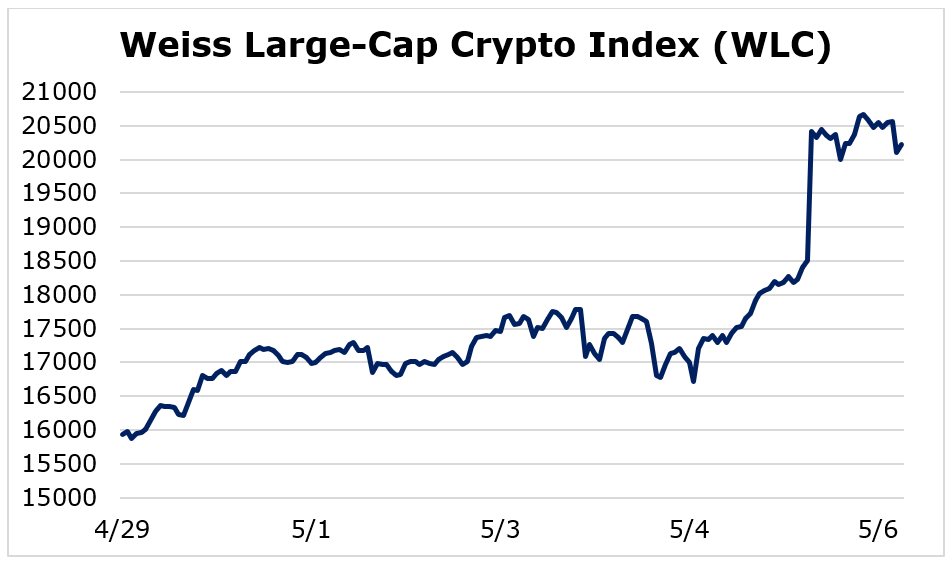 Mid-cap cryptocurrencies were the top performers this week, as the Weiss Mid-Cap Crypto Index (WMC) skyrocketed 61.61%.

The small-caps were finally dethroned for the first time in over a month. Still, the Weiss Small-Cap Crypto Index (WSC) soared a substantial 46.63%, and we could easily see them reclaim their position soon. 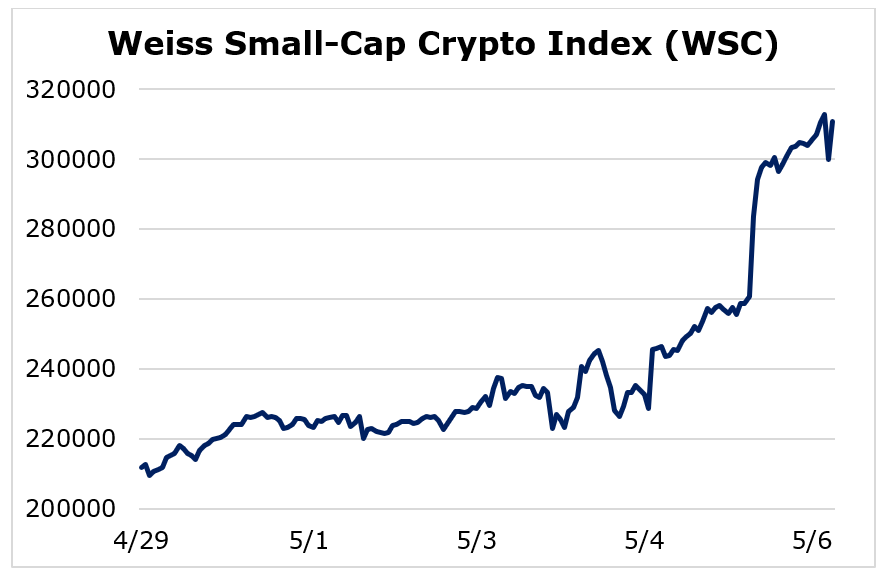 The mid-caps were able to perform the best this week, and this is likely due to the mechanics of capital flow in crypto.

Investors pour their fiat money into Bitcoin, where they then target the top large-caps such as Ethereum. Afterwards, investors chase yield in the mid-caps before the small-caps finally go crazy.

We’ve seen tons of money flow into Ethereum over the past two weeks, and we may be starting to see the mid-caps rally more heavily through the rotation.

Still, capital that flows into mid-caps often gets thrown into smaller projects after they appreciate, so it’s very likely we’ll see small-cap cryptocurrencies surge back as the familiar top performer soon. It’s a great sign if the biggest players manage to trade relatively in-line.

The crypto market has been on fire lately, and we’ve seen an explosive altseason thus far. There is currently nothing pointing to a rapid reversal, aside from a healthy correction, so we’ll continue monitoring developments as they unfold.

The flow of capital in crypto usually enters Bitcoin first, where it then trickles into the large caps and other established projects before flowing into the mid- and small- caps. We’re seeing this play out right now.

Ethereum’s scorching hot performance recently is a positive sign that altseason is progressing as expected, with even more flows from Ethereum into less established cryptos likely coming soon.

Despite Bitcoin’s relative stagnation compared to the broader market, it’s a good sign that it’s at least holding steady in a range.

Widespread corporate adoption and institutional demand should help offset outflows, and it may just be a matter of time before the King of Crypto takes off again.