An under-30 RSI reading means the market has fallen too fast, and bears may now take a breather, leaving the market rangebound. Bitcoin traded in a sideways manner above $30,000 for several weeks following the previous oversold reading registered on May 20, 2021.

"Daily RSI at all-time lows doesn't mean that bitcoin has bottomed out. In our opinion, a good consolidation phase is required to build confidence for investors to re-enter the markets," Lennard Neo, head of research at Stack Funds, told CoinDesk in a WhatsApp chat.

According to Jitesh Tipi, founder and CIO at Mumbai-based crypto asset management firm MintingM, the weekly chart RSI is nearing 35, a level that has marked price bottoms in the past.

That said, the RSI, just like other technical studies, isn't reliable as a solitary indicator and can stay oversold or overbought for a prolonged period.

"Think of building a house; a builder is reliant on a hammer, but as an isolated tool, the hammer is worthless when building an entire house. Other tools will be needed in conjunction with the hammer for construction – saw, drill, etc.," analysts at DailyFX noted in an explainer article. "The same concept relates to overbought/oversold signals which require complementary tools to strengthen the signal, and eventually allow traders to make sound trade decisions."

As of writing, there were no signs of renewed buying by large investors, with supply held by entities owning at least 1,000 BTC stagnant, having decoupled from rising prices in late September.

"Still a lack of large buyers, or what we refer to as "whales" on-chain. This looks at entities with over 1,000 BTC and then filters out exchanges," William Clemente, the author of Blockware Intelligence newsletter, said in the latest weekly edition published Friday. 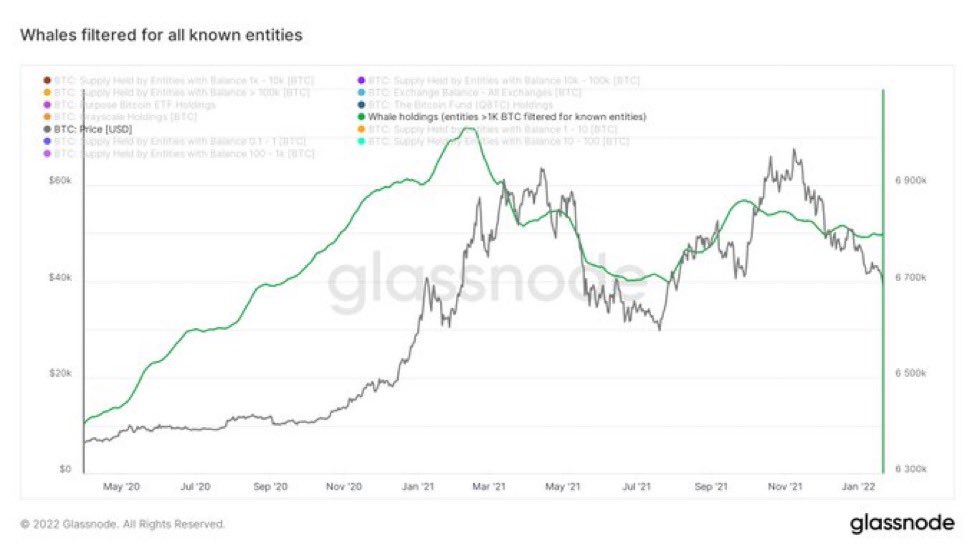 The late September divergence between whale holdings and rising prices was perhaps an advance indicator of a crash observed over two months. We saw a similar divergence heading into the May 2021 crash.

Lastly, persistent fears of earlier than expected and faster interest rate hikes by the Federal Reserve and U.S- Russia tensions may push the safe-haven dollar higher and keep bitcoin bulls at bay.

"Right now, fears from Macro uncertainties such as inflation and geo-political tensions have overflowed into crypto markets. The added strong correlation between both asset classes continues to pressure Bitcoin's price downwards. Hence, we could expect RSI to continue remaining low with more choppiness for price action in the near term," Stack Funds' Neo said.