Bitcoin recovered some of its drop, passing through $43,500, after Thursday's faster-than-estimated U.S. inflation print sparked declines in bonds, equities and the crypto market. Major cryptocurrencies nevertheless remained lower Friday over 24 hours, with bitcoin down 2.8% and ether 4.5% at the time of publication.

U.S. inflation hit 7.5% in January, a 40-year high, with prices for goods and costs for services expected to pick up. Traders from Goldman Sachs forecast up to seven rate hikes this year. Rate increases are levied rein in inflation, a direct result of the asset-buying program put in place by the U.S. Federal Reserve following the onset of coronavirus in early-2020.

“Cryptocurrencies were under the pressure of strong data on inflation in the United States on Thursday, which has updated 40-year highs,” FxPro analysts told CoinDesk in an email. “Such values can force the Fed to raise interest rates faster, which is negative for all risky assets, including cryptocurrencies.”

Still, the Fear and Greed index – which calculates market sentiment – remained neutral even as crypto markets followed equities lower. “The stock markets are having an increased impact on the dynamics of Bitcoin and Ethereum, in which the prospects for monetary policy are being reassessed,” the FxPro analysts said. 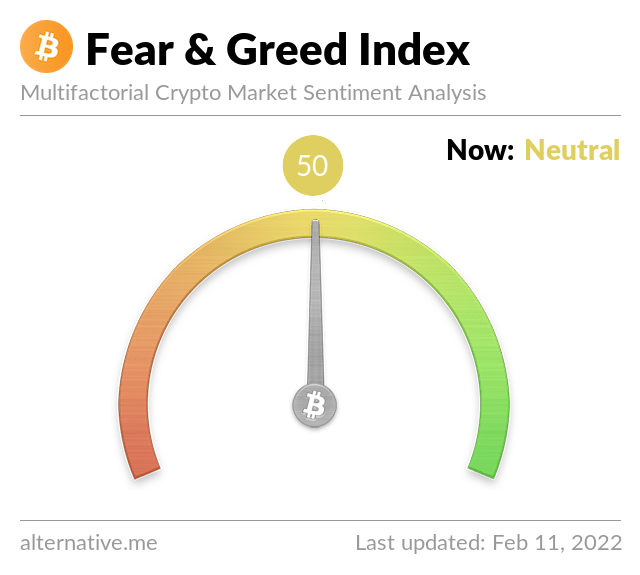 Bitcoin regained the $43,500 level after a brief dip to as low as $42,900 in early Asian hours, data from tracking tool CoinGecko showed. The asset continues to face resistance at $45,500.

Meanwhile, crypto funds such as Singapore’s QCP Capital remain bullish on the crypto market for February. “Crypto prices rallied even though NASDAQ traded lower towards the end of last week,” the firm said in a Telegram broadcast. “We don't think this means that crypto has necessarily decoupled from NASDAQ but this tells us there is tangible and targeted crypto demand right now.”

QCP said it's bullish for February as market expectations and reactions around Fed hikes subside and a “positive seasonality” – stocks typically gain in February.