With a number of news to support Bitcoin, October has proven to be exactly what bulls hoped for. After the much anticipated first Bitcoin ETF debuted on the NYSE, Bitcoin's value has surged recently, achieving astronomical new heights.

]Thus, for the first time in history, BTC price briefly rose to a record high of $69,044 on Wednesday, before retreating to around $65K level currently. A day earlier, it smashed an all-time high of $68,600 after breaking its October ATH of $67,000.

Meanwhile, the recent events in the stock market have led some market players to believe that BTC prices may be in trouble. There were conflicting reports regarding whether Chinese property giant Evergrande had defaulted on its overdue loan payments just prior to Bitcoin's recent price fall. This has raised fears of a wider financial crisis that could extend to the crypto market. However, a correction is a usual practice for Bitcoin following leaps to all-time highs.

Since Bitcoin was worth $15,000 per coin just a year ago, the flagship crypto has reached multiple milestones, and the latest record moves are a stunning feat. As things stand, crypto has become a mainstream sensation rather than an esoteric niche of finance. 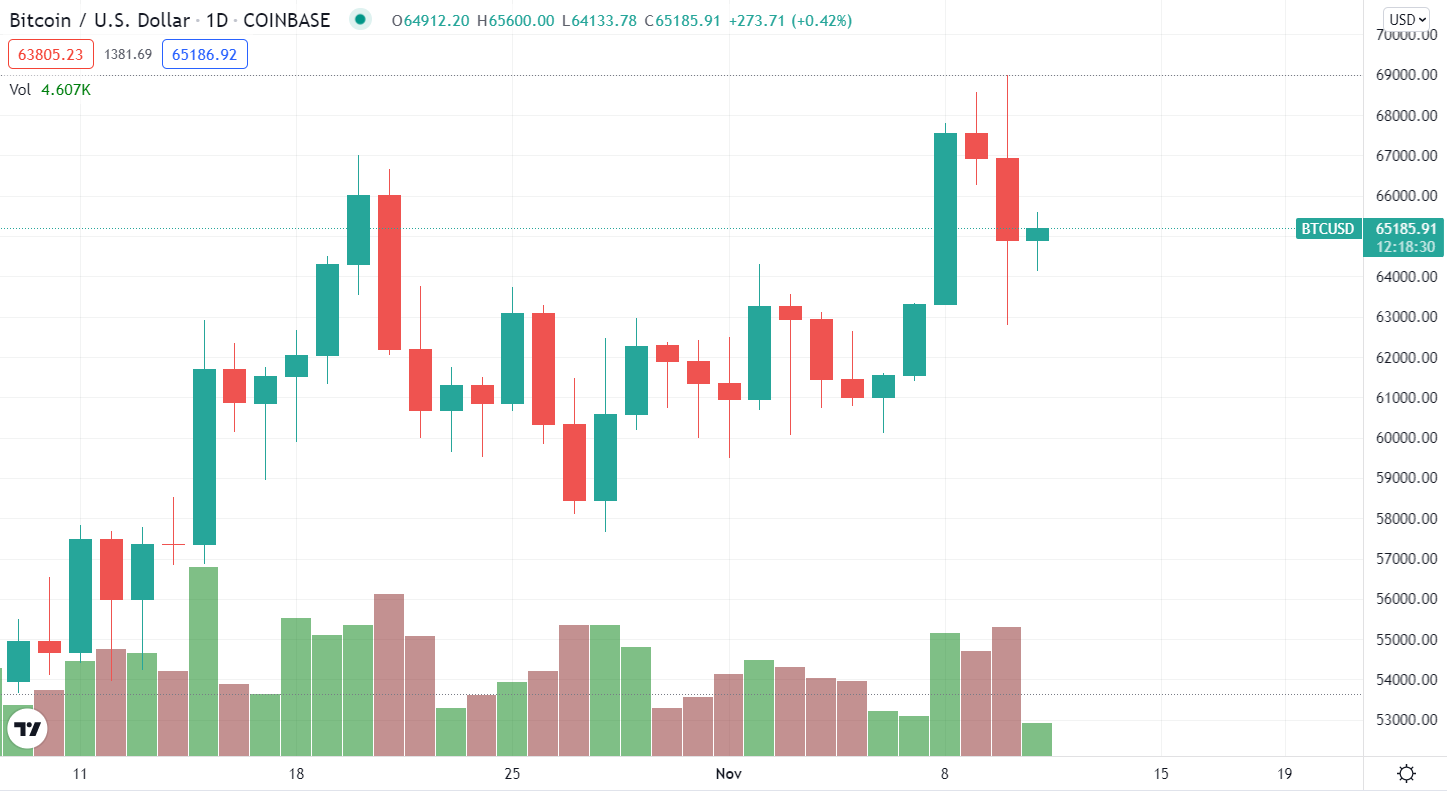 If we look at the on-balance volume (OBV) momentum indicator, we’ll see the OBV line heading up and the price trending up too. A convergence like this indicates that the bullish trend is gaining momentum. 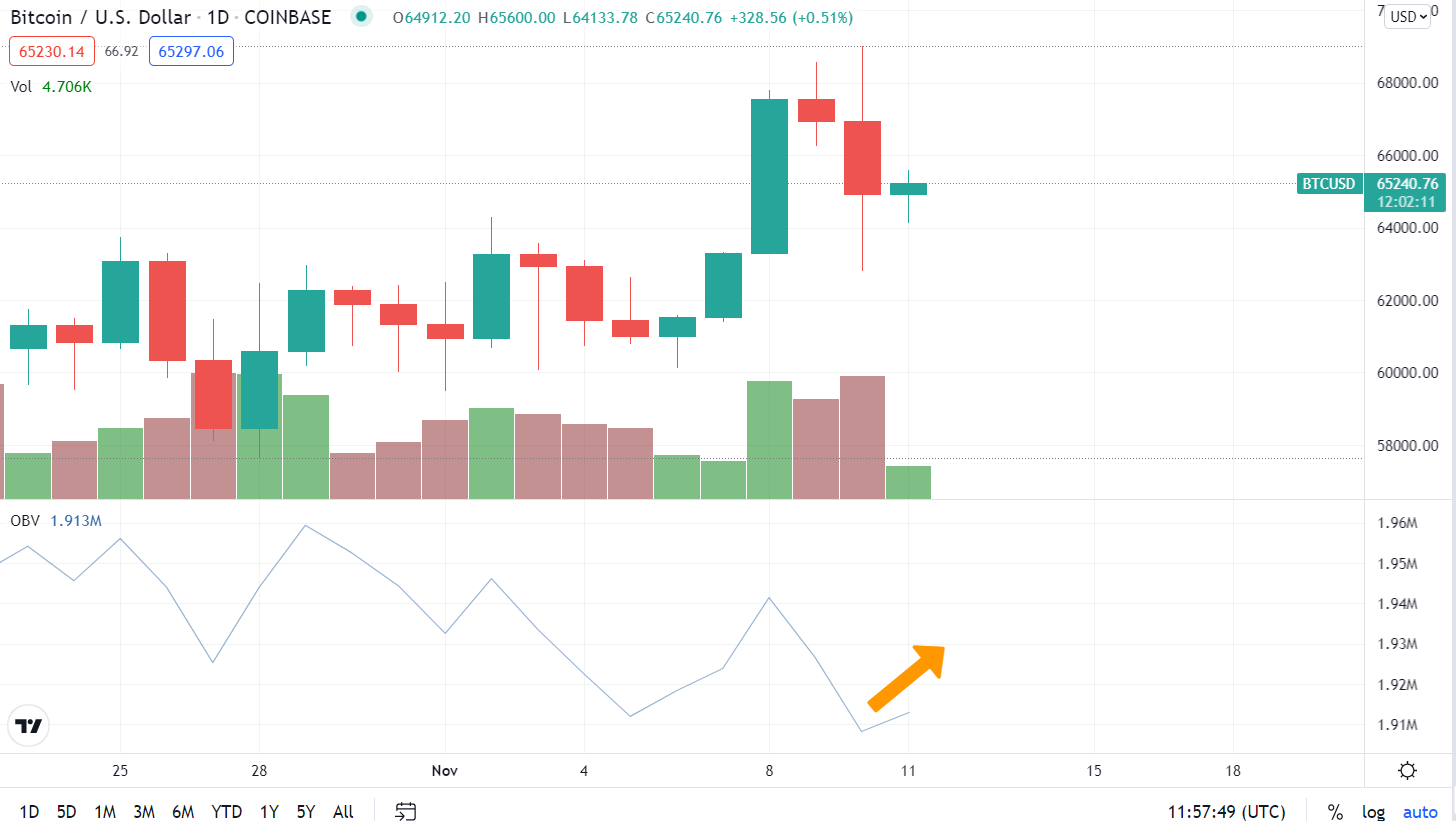 However, OBV alone cannot provide a clear picture of what is likely to follow so it’s crucial to consider other indicators and the news background.

November has kicked off in the green, with crypto prices higher across the board after the much-anticipated launch of bitcoin-based ETF from ProShares by last month.

In what's expected to be another big event for the crypto industry, cryptocurrency lending firm BlockFi has filed with SEC for a spot bitcoin exchange-traded fund. Its investment objective is to buy and hold physical bitcoin through an undisclosed custodian, in contrast with derivatives benchmarks.

However, analysts say that the prospects aren’t very bright for spot bitcoin ETFs, as the Securities and Exchange Commission (SEC) apparently prefers derivatives-based products to spot bitcoin ETFs. So it remains to be seen whether the SEC approves it.

"Given the importance of financial investment in gold, such a crowding out of gold as an ‘alternative currency' implies a big advantage for bitcoin in the long run," JP Morgan's global markets strategy analyst Panigirtzoglou said.

According to him, Bitcoin is unique in terms of its perception of digital gold and it has no rivals among other cryptos.

Can Ethereum sustain its rally?

Following in the footsteps of its big brother BTC, the world's #2 crypto reached a new all-time high of $4,865 on Wednesday after surpassing its previous record of $4,800 on Tuesday for the first time ever. Ethereum added 9.7% so far this month.

It’s enjoying growth momentum amid the hype around decentralized finance as it’s a key player in DeFi. However, this can be its weak side. According to JPMorgan, Ethereum's blockchain faces fierce competition from other blockchains, which are effectively trying to copy its functionality for smart contracts, DeFi, NFTs, and other apps.

“In turn, this creates the risk that the substantial increase in the ethereum network activity over the coming years embedded in the current price of $4,100 might not materialize,”  JP Morgan’s Panigirtzoglou noted.

He expects a decline of about 67% in ETH based on the fair value price.

I’m not that pessimistic about the future of Ethereum, since it has its burning mechanism to boost the coin’s value. After the much-anticipated launch of the first phase of Ethereum 2.0, that is scheduled for the beginning of 2022, gas fees, that have become a meme themselves, are going to be scarсed to near-zero levels. With higher speeds and a much greener carbon footprint, Ethereum can’t help saving its positions and remain competitive in 2022. 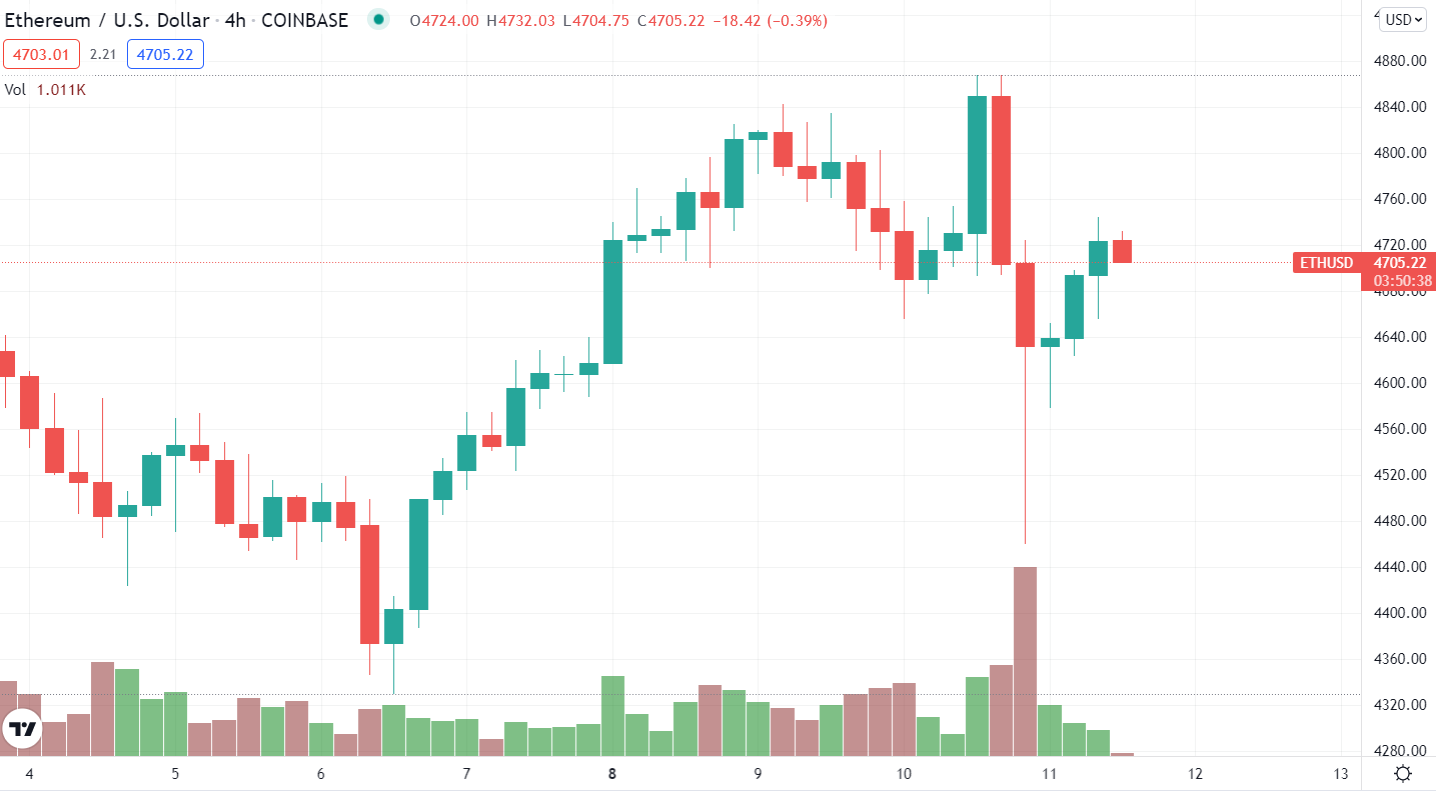 These record price moves come amid a wider rally in the cryptocurrency market, with its total capitalization surpassing $3 trillion earlier this week. 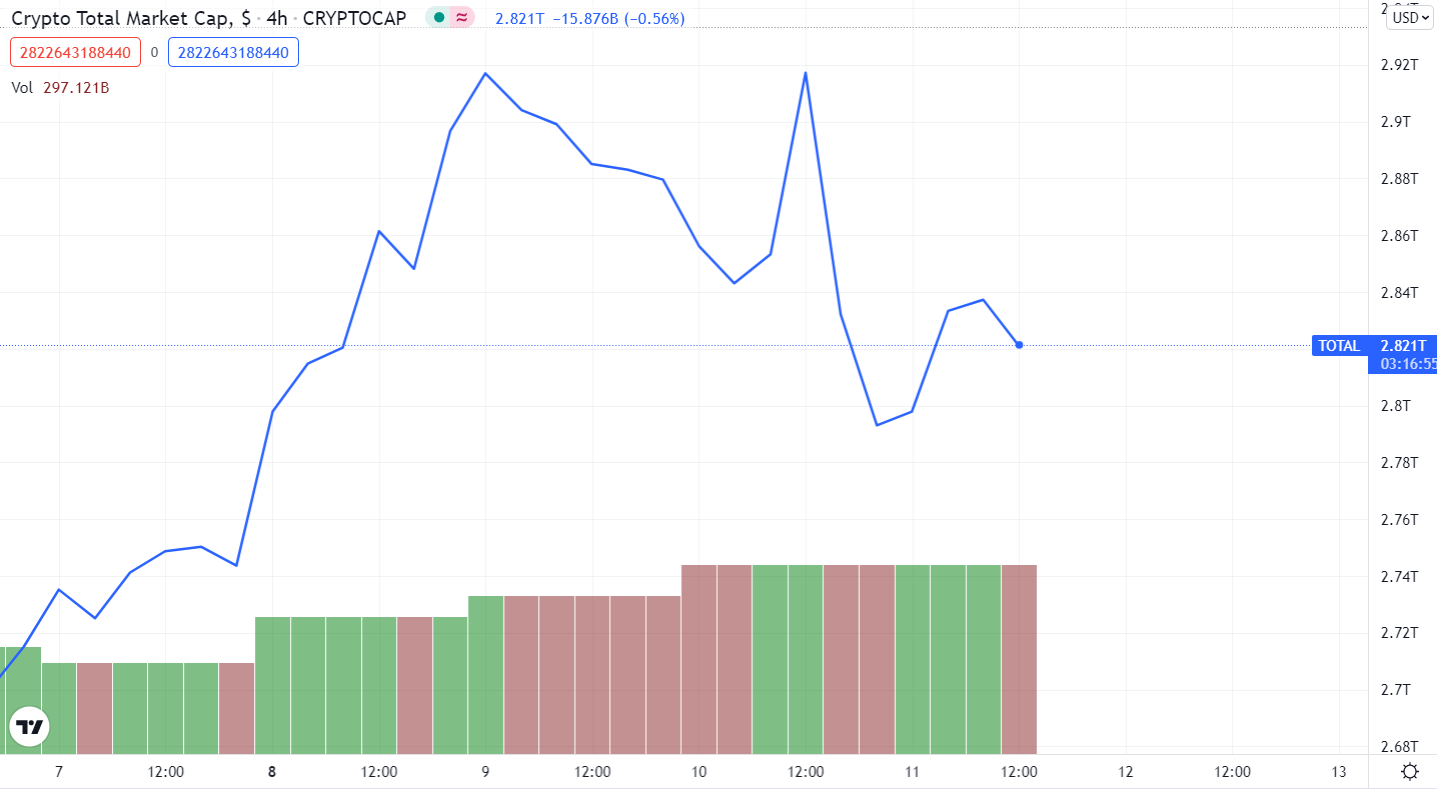 Ethereum Meta (ETHM) was the top gainer in the crypto market in the last 24 hours, trading at $0.00001892 at the time of writing and posting an astronomical 15,148.39% daily gain. With its new Ethereum Meta smart contracts, Ethereum Meta allows direct anonymous payments between parties. Ethereum Meta transactions exist alongside non-anonymous transactions.

Lithium (LITH) was the second top gainer, trading at $0.5194, up by a whopping 728.92% in the past 24 hours. The coin promotes a currency model that allows small-capital investors to subvert the traditional asset investment in the rising lithium concentrate.

Aurora (AOA) was the third top-performing coin, trading at $0.00326, up by 360.13% in the last 24 hours. AOA claims its mission is to develop a blockchain world with fast-working contracts that ease the development of blockchain-based applications.