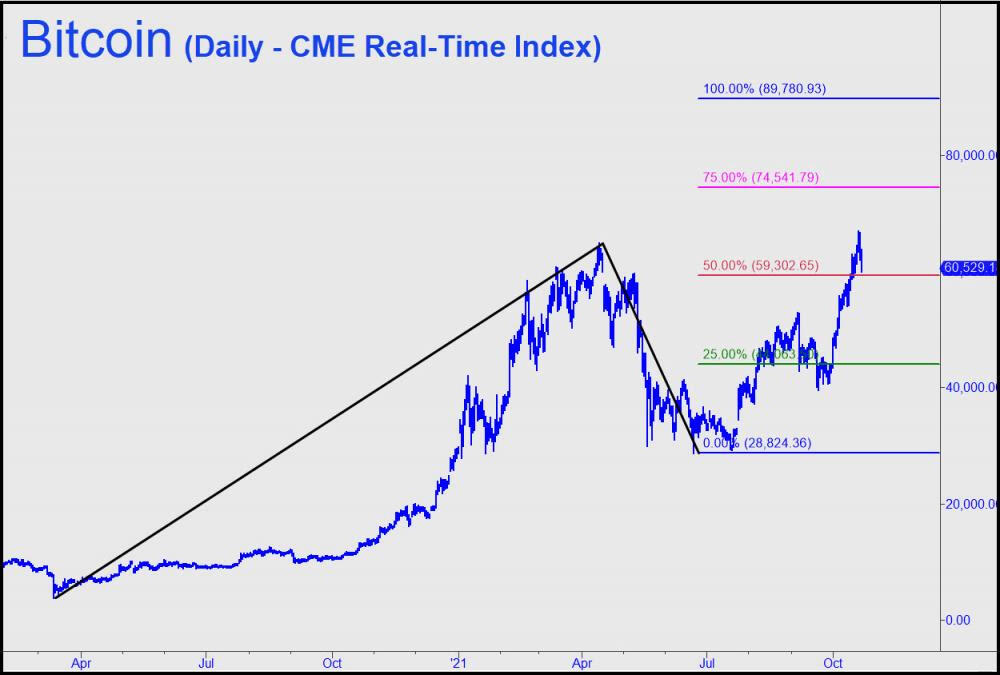 The performance of Apple shares has been a reliable harbinger of where greed and hubris would take this seemingly invincible bull market next. Apple is the biggest-cap stock of them all, worth $2.5 trillion, and it has increasingly become a sure thing for institutional investors since bottoming a generation ago below $5. With its broad base of fat-cat stakeholders, the stock has been an ideal market bellwether. More than any other stock, it is responsible for making portfolio managers look like geniuses, and for creating the deception that a U.S. pension system headed for certain disaster in the next bear market is in great shape. (Presently, it would appear the disaster lies at least somewhat down the road, since AAPL is trading a tad shy of a 151.02 target that could conceivably quell revelers.)

This week, however, we will turn out attention to bitcoin, represented in the chart above by a CME vehicle that tracks best bids and offers for bitcoin in real time across many exchanges.  It could be argued that bitcoin is an even better bellwether than Apple, since it lucidly captures not only the methodical rigging of the investment casino by Wall Street hucksters, but the unmitigated craziness of the players.  They are being cheered on by big banks that surely know better, since bitcoin's supposed value is backed by...nothing. Without having much actual skin in the game, the banks have been shamelessly talking their book since they conspired to lift bitcoin from pariah status back in March 2020.

This followed a shakeout that would have devastated mainly Wayne's World nerds who were early adopters and traders of bitcoin.  The virtual currency fell from above $10,000 to $3900 before the big boys began to aggressively tout encrypted money as a viable medium for financial transactions. This has yet to happen, in part because cryptocurrencies (although not blockchain technology, which holds enormous promise) offers few advantages over a credit card system that works just fine. Bitcoin has nonetheless succeeded wildly as a vehicle for table-stakes speculation, gaining credibility in the mainstream media because of its acceptance by financial institutions and by high-profile players such as Paul Tudor Jones, Michael Saylor and the Winklevoss brothers.

So what can BRTI's chart tell us? For starters, that bitcoin could move fully 50% higher, to a top at 89,790, before the bull market cycle begun in 2020 runs out of steam. By comparison, the most ambitious target I can come up with for the Dow Industrials is 42,219, a mere 20% above current levels. This implies that if the bull market is entering a blowoff phase, as I suspect, the move in bitcoin will be far more impressive in percentage terms.  Most immediately, bitcoin (aka 'Bertie') would become a theoretical buy if the correction touches the red line at 59,302. This is in accordance with 'mechanical' trade rules of the Hidden Pivot Method. The entry risk is close to $10,000, and so I've advised this gambit only for subscribers expertly familiar with risk-cutting tactics made possible with Hidden Pivot 'camouflage'. In any event, we'll continue to exploit the bull market's topping process and its daily deceptions as long as the extraordinary opportunities this presents continue.