The bulls pumped up the market, but with fundamentals deteriorating and corporations largely responsible for the spike, regular investors will be left holding the bag.

With investors betting on a Santa Clause rally despite the deteriorating fundamentals, the S&P 500 helped the GDXJ ETF (proxy for junior mining stocks) outperform on Dec. 7. However, with short-covering and corporate buybacks primarily responsible for the daily spike, another ‘Minsky Moment’ could be on the horizon.

On top of that, the CAC 40 had an RSI (Relative Strength Index) north of 80, while the DAX 30 had an RSI north of 75. As a result, both indices are materially overbought at a time when Germany is implementing new restrictions. Thus, if a Minsky Moment strikes in Europe, don’t be surprised if the negativity cascades across the Atlantic. 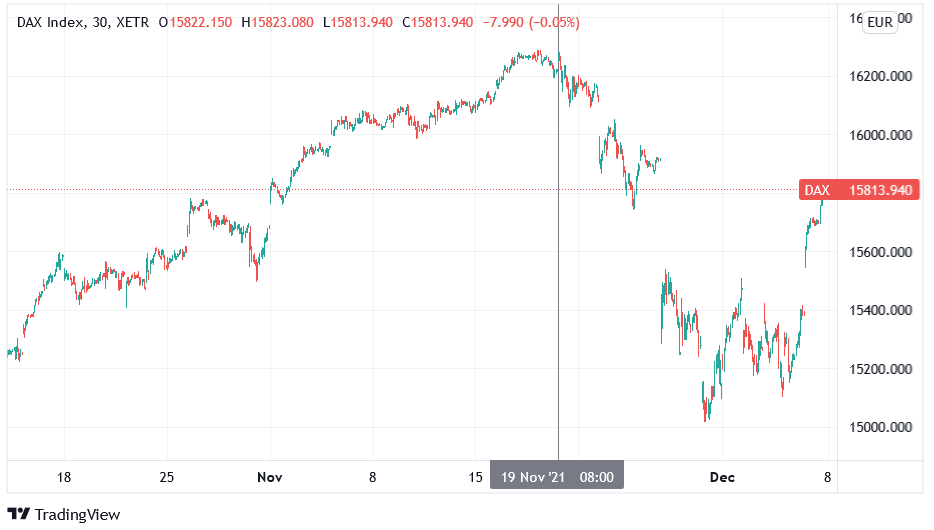 However, with overzealous equity bulls back at it again on Dec. 7, the PMs benefited from the risk-on sentiment. However, with the fundamental problems still present, investors may have set themselves up for more disappointment.

To explain, with hedge funds increasing their short bets a little too late, Goldman Sachs Prime Brokerage reported that last week, “US equities on the GS Prime book made up more than 85% of the global $ net selling (-1.4 SDs), driven by short sales and to a lesser extent long sales (9 to 1).”

In a nutshell: hedge funds increased their short bets at the worst possible time.

Thus, with the Dec. 7 rally driven mainly by a reversal of these positions, the profound short squeeze helped uplift the PMs. For example, Bank of America data shows that last week’s corporate buybacks were the highest weekly total since March. And by repurchasing nearly $3.4 billion of their own stock (focus on the first blue column from the left), their bids helped calm the S&P 500’s selling pressure. 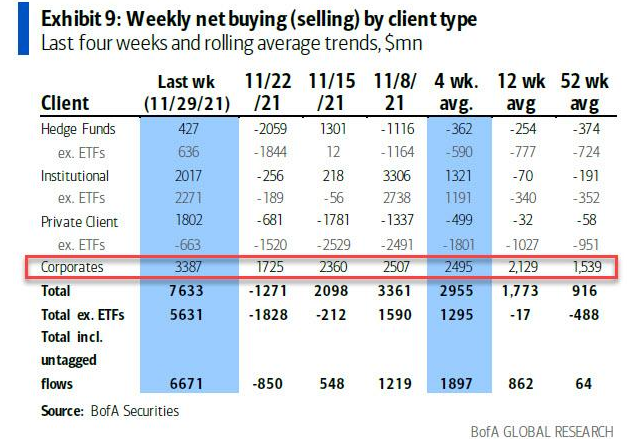 What’s more, while Bank of America said that hedge funds and retail investors somewhat bought the dip last week (though, they’re still net-sellers over the last four weeks), corporations did much of the heavy lifting.

As a result, with retail investors running out of gas and hedge funds mainly closing out their shorts on Dec. 7, the S&P 500 should resume its correction. More importantly, though, mining stocks’ recent strength should wilt away as the drama unfolds. 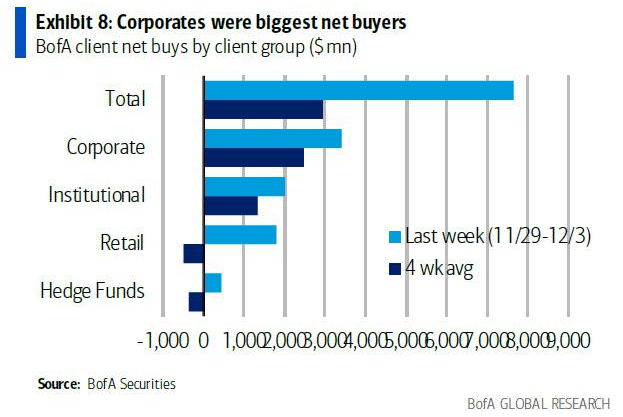 And now for the grand reveal: corporations' buyback blackout period begins on Dec. 10. And since they can't repurchase more shares until the New Year, the elephant in the room won't be able to support the S&P 500. Likewise, after hedge funds covered their shorts on Dec. 7, short-covering won't be able to support the S&P 500 either. As a result, mining stocks should suffer if the negativity resurfaces over the next few weeks. 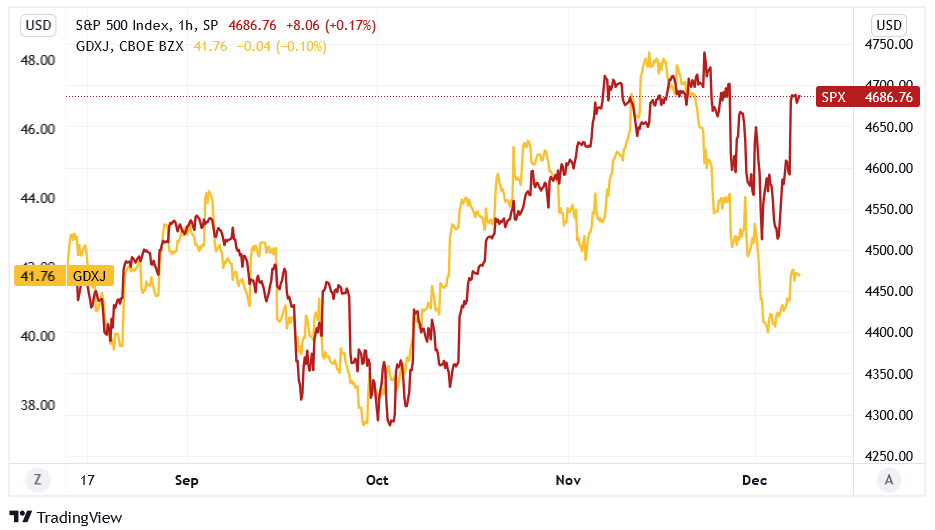 To that point, with the headline Consumer Price Index (CPI) scheduled for release on Dec. 10 and the Fed’s next monetary policy meeting scheduled for Dec. 14/15, sources of volatility will arrive at a time when corporations are stuck on the sidelines.

I’ve highlighted on several occasions how the Commodity Producer Price Index (PPI) often leads the following month’s headline CPI. And after the former increased by 2% month-over-month (MoM) on Nov. 9 �" which is a material MoM increase �" and by 22.2% YoY (a new 2021 high), it implies a headline CPI print of roughly 5.75% to 6.25% when the data is released on Dec. 10. 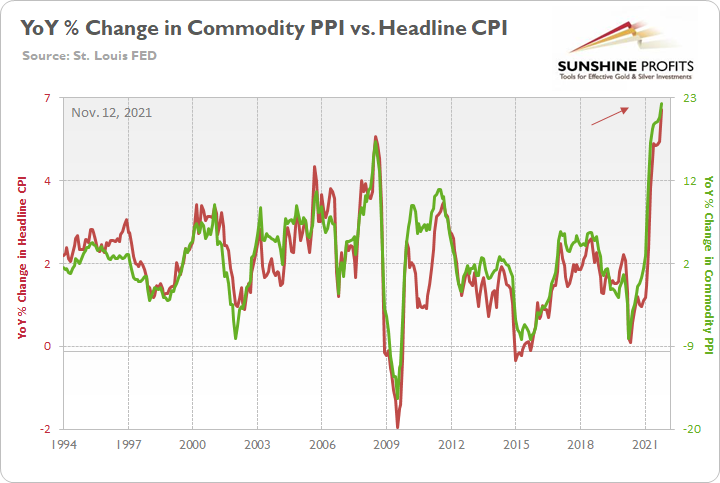 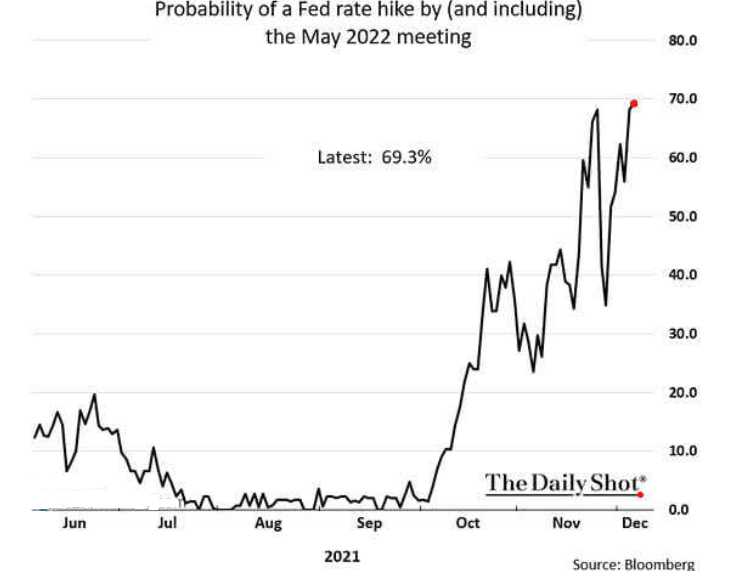 Also noteworthy, St. Louis Fed President James Bullard said on Dec. 3 that “the danger now is that we get too much inflation.... It's time for the [Fed] to react at upcoming meetings.”

He added: “The inflation numbers are high enough that I think [ending the taper by March] would really help us to create the optionality to do more if we had to, if inflation doesn't dissipate as expected in the next couple of months.”

For context, Bullard reiterated that he expects two Fed rate hikes in 2022.

The bottom line? While the bulls stampeded through Wall Street on Dec. 7, things aren’t as rosy as they appear. And while the PMs benefited from the renewed optimism, their tepid rallies are even more fragile. Moreover, with another inflation print on the horizon and the FOMC’s Dec. 15 decision including its Summary of Economic Projections, the hawkish revelations could rattle the financial markets. And with corporate buybacks starting their holiday vacation on Dec. 10, stock market investors are on their own to navigate what comes next.

In conclusion, the PMs rallied on Dec. 7, as risk-on sentiment reigned supreme. However, with the S&P 500 rallying by more than 2% and WTI rallying by nearly 4%, the PMs’ daily upswings were relatively muted. As a result, precious metals investors sense that caution is warranted. And with their trepidation a sign of heightened anxiety, they likely realize that going long the PMs involves much more risk than reward.